Only a few points out of a playoff spot, but with several teams to climb over, the Tampa Bay Lightning became sellers this week.It was necessary and wise but also a stunning admission of where the franchise is right now.And a reminder of just how good Chicago... 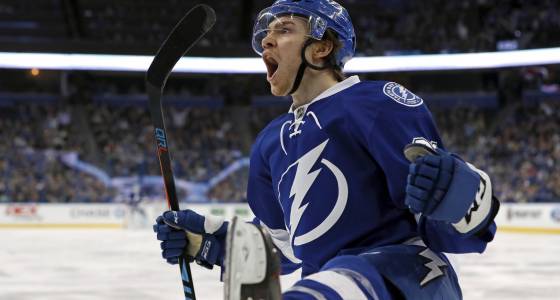 Only a few points out of a playoff spot, but with several teams to climb over, the Tampa Bay Lightning became sellers this week.

It was necessary and wise but also a stunning admission of where the franchise is right now.

And a reminder of just how good Chicago hockey fans have had it for the last nine years, when every season has brought an opportunity to compete for the big prize.

It's also a cautionary tale for even the best teams in the league, each one a fragile puzzle with pieces that disappear due to injuries, bad luck and even the mumps.

When last we saw the Lightning in Chicago -- at least the last time most noticed -- Tampa was giving the Blackhawks everything they could handle in the 2015 Stanley Cup Final.

It was the best offense in the league against the best defense, the young and speedy Lightning against the vaunted core of the two-time champs.

And it was Tampa with the 2-1 series lead in Game 4 at the UC, a game that was tied until the third when the Hawks scored and held on to knot the series and avoid a 3-1 Final deficit.

Game 5 in Tampa was also tied in the third, the Hawks prevailing again by a goal. Game 6 at home was scoreless 37 minutes in when Duncan Keith gave the Hawks the lead, and Patrick Kane put it away with five minutes to play.

Every game was decided by a goal until the clincher. Tampa was that close to winning the Stanley Cup, even while starting goaltender Ben Bishop played with a torn groin and Tyler Johnson had a broken wrist.

"We had the test of our lives against Anaheim (in the conference finals) and we win Game 1 against Tampa and I'm not sure we understood how good this team was," Joel Quenneville told me the night the Hawks won their third Cup. "That's a great young team. Their best players are as good as anyone's best players.

"They gave us everything they had and I'm not sure there was a lot of difference between us. We just have great leadership and great players who get us to the finish line when it looks tough.

"But that team over there is going to be good for a long time."

No one in hockey would have argued that point on that night, and last year the Lightning appeared as if it would get back to the Final and capture the big silver trophy.

Tampa reached the Eastern Conference finals and had a 3-2 lead on Pittsburgh, only to lose Game 6. In Game 7, the Penguins held on to a 2-1 lead for the final 30 minutes of the game and went on to win the Cup.

A popular pick to win it all, this year has been a nightmare of injuries, playoff fatigue and underperformance for the Lightning.

No team in the league has played more games the last two years, no team had more players in the World Cup last September.

The goaltending -- which was a strength -- has been bad, the defense is at least a player short, and the Triplets have not held up their end.

Two unrestricted free agents, Brian Boyle and Bishop, have been dealt -- moves you don't make if you're still trying to win -- and more big names are on the block.

Just that fast, the salary cap has caught up to them, players are being traded, and management is talking about competing in the future, which might not be next year.

"We're going to do everything we can to make the playoffs," GM Steve Yzerman told the Tampa media. "But I'm going to make my decisions based on what gives us the best chance of winning a Stanley Cup, whether that's now, a year from now or two years from now."

Tampa has three terrific, young players who need to be signed long term, and the Lightning still needs another defenseman or two.

The Lightning did so much right to get to the top, signing smart contracts, drafting and developing well, and getting Johnson as an undrafted free agent.

Tampa Bay almost won it all the last two years.

And now they are sellers, a brittle team wondering what happens next.

The top three teams in the Atlantic a year ago -- Florida, Tampa and Detroit -- might all miss the playoffs.

Meanwhile, the Hawks are on fire and looking for their fourth Stanley Cup in the last eight years.

In the NHL these days, nobody has it better than that.