CLEVELAND, Ohio -- When it comes to anti-Semitism, racism and equal rights for the LGBT community, President Donald Trump needs to listen to his better angel, daughter Ivanka, and not his chief strategist, Steve Bannon. Tuesday, Donald Trump finally denounced... 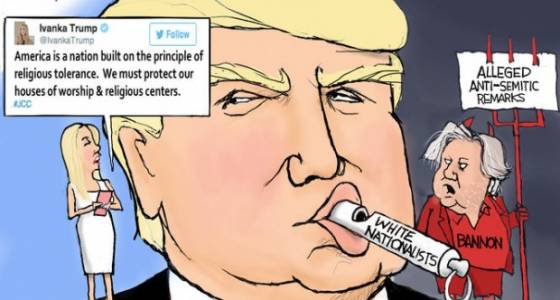 CLEVELAND, Ohio -- When it comes to anti-Semitism, racism and equal rights for the LGBT community, President Donald Trump needs to listen to his better angel, daughter Ivanka, and not his chief strategist, Steve Bannon.

Tuesday, Donald Trump finally denounced anti-Semitism, following another wave of bomb threats to Jewish centers across the country and vandalism at a Jewish cemetery.

"The anti-Semitic threats targeting our Jewish community at community centers are horrible and are painful and a very sad reminder of the work that still must be done  to root out hate and prejudice and evil", said Trump, also noting his daughter Ivanka, son-in-law and grandchildren are Jewish.

Trump made the comment after visiting the Smithsonian National Museum of African History and Culture.  He said the tour was a "meaningful reminder of why we have to fight bigotry, intolerance and hatred in all its very ugly forms.

It's good that the president finally spoke out, but he needed to do so far sooner and with believable conviction.  Doubts about the sincerity of Trump's remarks are more than justified.

The president had to read all of his remarks and they came only after his daughter Ivanka and Hillary Clinton tweeted on the topic.

"JCC threats,cemetery desecration & online attacks are so troubling & they need to be stopped.  Everyone must speak out, starting w/@POTUS.  -Hillary Clinton

"America is a nation built on the principle of religious tolerance.  We must protect our houses of worship & religious centers. #JCC "-- Ivanka Trump

The Twitter world  reacted to  Ivanka's tweet by suggesting she send the message to her father and Steve Bannon.

Besides twitter, the Trump campaign's most effective device was the dog whistle they used to bring out white nationalists and anti-Semites, to the point that they won the ringing endorsement of ex-Klan Grand Wizard David Duke.

According to the sworn statement by Bannon's ex-wife, at one school he "asked the director why there were so many Chanukah books in the library."

The Anti-Defamation League condemned Bannon's White House appointment.  "It's a sad day when a man who presided over the premier website of the Alt Right, a loose-knit group of white nationalists and unabashed anti-Semites and racists - is slated to be a senior staff member in 'the people's house'."

For the first time ever, The White House's statement on Holocaust Remembrance Day made no mention of anti-Semitism or the Jewish people.  A stunning,disturbing and indefensible minimization of the slaughter of over 6 million people because of their Jewish faith.

Just last week, in two separate press conferences, Trump responded to questions about how he would respond to rising anti-Semitism, with bullying anger and talking about his campaign victory.

During a joint press conference with Israeli Prime Minister Benjamin Netanyahu, when asked about the anti-Semitic climate growing hotter, Trump talked about his electoral college victory instead.   Netanyahu attempted to answer for him.

At his lengthy press conference, when a reporter from a Jewish magazine asked a similar question, Trump snapped at him, calling the question insulting and boasting that he was the "least anti-Semitic person in the world."

In a statement the ADL wrote, "On two separate occasions over the past two days, President Trump has refused to say what he is going to do about rising anti-Semitism or to even condemn it.  This is not a partisan issue.  It's a potentially lethal problem -- and it's growing."

The Anne Frank Center for Mutual Respect found Trump's brief statement decrying anti-Semitism to be too little-too late, calling it a "Band-Aid on the cancer of Antisemitism  that has infected his own Administration."

In a Facebook post, the Center's executive director Steven Goldstein, had more to say on Trump and his administration.

"His statement today is a pathetic asterisk of condescension after weeks in which he and his staff have committed grotesque acts and omissions reflecting Antisemitism, yet day after day have refused to apologize and correct the record.  Make no mistake: The Antisemitism coming out of this Administration is the worst we have ever seen from any Administration.

The White House repeatedly refused to mention Jews in its Holocaust remembrance, and had that audacity to take offense when the world pointed out the ramifications of Holocaust denial.  And it's only yesterday, President's Day, that Jewish Community Centers across the nation received bomb threats, and the President said absolutely nothing.  When President Trump responds to Antisemitism proactively and in real time, and without pleas and pressure, that's when we'll be able to say this President has turned a corner.  This is not that moment."

Trump, and his defenders, are always quick to point out that Ivanka,her husband Jared Kushner and their children are all Jewish.  Ivanka converted when she married Kushner, who practices orthodox judaism.      To me, that makes it all the more indefensible, mystifying and disturbing that President Trump hasn't denounced anti-Semitism sooner and has someone like Steve Bannon not only on his staff, but reportedly the most powerful person on his staff.

How genuine were Trump's comments at the National Museum of African American History and Culture about the work to "root out hate and prejudice?"    Yesterday, Trump signed off on the administration's new policy allowing states to discriminate against transgender students in school, that's how genuine Trump's comments were.