Two days ahead of the Trump administration approved an easement for the Dakota Access pipeline to cross a reservoir near the Standing Rock Sioux Tribe reservation, the U.S. Division of the Interior withdrew a legal opinion that concluded there was “ample... 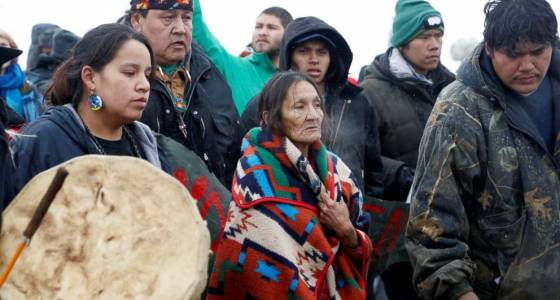 Two days ahead of the Trump administration approved an easement for the Dakota Access pipeline to cross a reservoir near the Standing Rock Sioux Tribe reservation, the U.S. Division of the Interior withdrew a legal opinion that concluded there was “ample legal justification” to deny it.

The withdrawal of the opinion was revealed in court documents filed this week by U.S. Army Corps of Engineers, the same agency that requested the critique late last year.

“A pattern is emerging with [the Trump] administration,” stated Jan Hasselman, an attorney representing the Standing Rock Sioux Tribe. “They take fantastic, thoughtful work and then just throw it in the trash and do whatever they want to do.”

The 35-web page legal evaluation of the pipeline’s prospective environmental dangers and its impact on treaty rights of the Standing Rock Sioux and other indigenous tribes was authored in December by then-Interior Division Solicitor Hilary C. Tompkins, an Obama appointee who was -- at the time -- the prime lawyer in the department.

“The government-to-government partnership among the United States and the Tribes calls for enhanced engagement and sensitivity to the Tribes' concerns,” Tompkins wrote. “The Corps is accordingly justified should really it pick to deny the proposed easement.”

Tompkins’ opinion was dated Dec. four, the same day the Obama administration announced that it was denying an easement for the controversial crossing and initiating an environmental impact statement that would explore alternative routes for the pipeline. Tompkins did not respond to a request by ABC News to discuss her evaluation or the selection made to withdraw it.

On his second weekday in workplace, President Donald Trump signed a memorandum that directed the Army Corps of Engineers to “review and approve” the pipeline in an expedited manner, to "the extent permitted by law, and as warranted, and with such circumstances as are needed or acceptable." “I think that construction and operation of lawfully permitted pipeline infrastructure serve the national interest,” Trump wrote in the memo.

Two weeks later, the Corps issued the easement to Dakota Access and the environmental review was canceled.

The organization behind the pipeline project now estimates that oil could be flowing in the pipeline as early as March six.

The analysis by Tompkins incorporates a detailed evaluation of the tribes’ hunting, fishing and water rights to Lake Oahe, the federally controlled reservoir exactly where the final stretch of the pipeline is currently being installed, and concludes that the Corps “must take into consideration the probable impacts” of the pipeline on these reserved rights.

“The Tompkins memo is potentially dispositive in the legal case,” Hasselman said. "It shows that the Army Corps [beneath the Obama administration] produced the appropriate selection by putting the brakes on this project until the Tribe’s treaty rights, and the danger of oil spills, was fully evaluated."

Tompkins’ opinion was especially vital of the Corps’ selection to reject yet another prospective route for the pipeline that would have placed it just north of Bismarck, North Dakota, in part due to the fact of the pipeline’s proximity to municipal water provide wells.

“The Standing Rock and Cheyenne River Sioux Reservations are the permanent and irreplaceable homelands for the Tribes,” Tompkins wrote. “Their core identity and livelihood rely upon their connection to the land and atmosphere -- as opposed to a resident of Bismarck, who could merely relocate if the [Dakota Access] pipeline fouled the municipal water provide, Tribal members do not have the luxury of moving away from an environmental disaster with out also leaving their ancestral territory.”

Kelcy Warren, the CEO of Energy Transfer Partners, the corporation behind the project, has stated that “concerns about the pipeline’s influence on local water supply are unfounded” and “multiple archaeological research carried out with state historic preservation offices discovered no sacred products along the route.”

The selection to temporarily suspend Tompkins' legal opinion two days just before the easement was authorized was outlined in a Feb. six internal memorandum issued by K. Jack Haugrud, the acting secretary of the Department of the Interior. A spokeswoman for the department told ABC News right now that the opinion was suspended so that it could be reviewed by the department.

The Standing Rock Sioux and Cheyenne River Sioux Tribes are continuing their legal challenges to the pipeline. A motion for a preliminary injunction will be heard on Monday in federal court in Washington, D.C.

The Corps has maintained, throughout the litigation, that it produced a fantastic faith work to meaningfully consult with the tribes.

The tribes contend, however, that the Trump administration’s cancellation of the environmental review and its reversal of prior agency decisions are “baldly illegal.”

“Agencies can’t just disregard their own findings, and ‘withdrawing’ the Tompkins memo doesn’t adjust that,” Hasselman said. “We have challenged the legality of the Trump administration reversal and we feel we have a powerful case.”