They waved the Confederate flag and a shotgun at a black child's party. Now they're headed to prison on terrorism charges.

In July 2015, a group of 15 people calling themselves "Respect the Flag" boarded several pickup trucks, each outfitted with Confederate and American flags, and embarked on a drive around Douglasville, Ga., a small city west of Atlanta.4 Months Ago5... 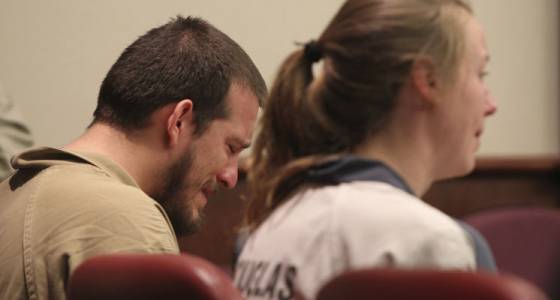 In July 2015, a group of 15 people calling themselves "Respect the Flag" boarded several pickup trucks, each outfitted with Confederate and American flags, and embarked on a drive around Douglasville, Ga., a small city west of Atlanta.

Tensions around displaying the Confederate flag were already high. Barely a month had passed since Dylann Roof, the avowed white supremacist who had posed with the Confederate battle flag, killed nine black Americans at a church in Charleston.

And the small "Respect the Flag" group went far beyond a display of Confederate pride. Hatred, a Georgia judge said during a sentencing Monday, propelled the group as they descended upon a child's birthday party and unleashed a storm of death threats and anti-black slurs, and pointed a shotgun.

"Their actions were motivated by racial hatred," said Judge William McClain, of the Douglas County Superior Court, according to the Associated Press. Georgia legislature does not include a law regarding hate crimes.

The 10 men and five women who made up "Respect the Flag" harassed black drivers as well as customers at a Walmart and a convenience store.

Then they happened upon a birthday party being held in Douglasville for an 8-year-old black child. Witnesses told the Southern Poverty Law Center, a nonprofit group that tracks hate crimes, that after driving the trucks across the property belonging to the child's grandmother, the men exited the vehicles. The "Respect the Flag" group began to yell racial epithets and shout death threats.

"They even threatened to kill children at the party," according to a statement issued by Douglas County District Attorney Brian Fortner in early February. One of the men, 26-year-old Jose Ismael Torres, pointed a black pump shotgun at the partygoers, prosecutors said. Several panicked citizens called the police.

"Everywhere you went, 911 call centers were flooded with calls," the judge said, the Atlanta Journal-Constitution reported.

"I was scared," Melissa Alford, the host of the party, told the Southern Poverty Law Center in October, a few days after the group's members were indicted. "My first thought was if these people start shooting at us, we wouldn't be able to get all the kids inside the house in time."

The defendants in the case argued that a party attendee triggered the incident by hurling an object at one of the trucks. Cellphone video taken at the scene showed otherwise, the judge said.

"If you drive around town with a Confederate flag, yelling the n-word, you know how it's going to be interpreted," the judge said, per Atlanta's Fox 5. "It's inexplicable to me that you weren't arrested by the police that day."

The members of the group, two of whom pleaded guilty, were convicted in early February.

Following the convictions, the Douglas County district attorney issued a statement clarifying that this case was not an issue of the First Amendment but of harassment.

"Many people tried to make the case about simply flying the Confederate battle flag. However, it wasn't about that at all," Fortner said in the statement. "Instead, this case was about a group of people riding around our community, drinking alcohol, harassing and intimidating our citizens because of the color of their skin."

The judge handed down the final two sentences on Monday. Torres was sentenced 20 years, serving 13 in prison. The mother of his children, Kayla Rae Norton, 25, was sentenced to 15 years and will serve six. After their prison terms, they will be banished from Douglas County. They were found in violation of Street Gang Terrorism and Prevention Act; Norton was found guilty of violating the act as well as a count of making terroristic threats. The jury convicted Torres of three counts of aggravated assault, one count of making terroristic threats and one count of violating the act.

The scene in the courtroom was an emotional one. Both Torres and Norton cried as their sentences were announced, the Associated Press reported. Norton apologized to the victims.

One of the victims, Hyesha Bryant, expressed her forgiveness. "I forgive you," Bryant said. "And to your family, I'm sorry it had to come this far."