TAMPA — For Christo Landry, Sunday's Publix Gasparilla Distance Classic half-marathon resembled a chess match as much as a foot race.3 Days Ago1 Week Ago1 Day AgoThe former William & Mary standout did not have to worry about the front-runners as long... 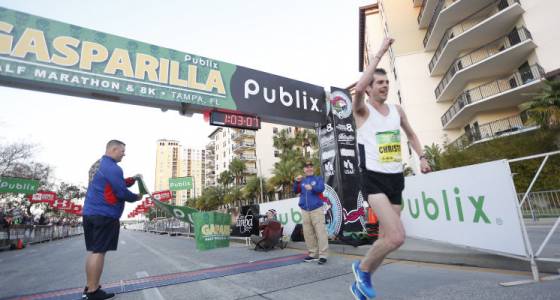 TAMPA — For Christo Landry, Sunday's Publix Gasparilla Distance Classic half-marathon resembled a chess match as much as a foot race.

The former William & Mary standout did not have to worry about the front-runners as long as he could see them. He stalked patiently, sitting on his opponents' shoulders, waiting to unleash his devastating kick.

The strategy worked. Landry, 30, surged ahead around the 11-mile mark to surge and never relinquished his lead, winning in a course-record one hour, 3.08 minutes.

"I just try to stay in position while not going ahead before I had planned," said Landry, who lives in Charlotte, N.C. "I needed to ramp myself up mentally to make that move."

Scott Smith, 30, broke like a sprinter after the first mile. It took just a few strides before the former University of Santa Barbara standout was in the lead.

"That wasn't really my plan," Smith said. "I wanted it to be more like a 10K to see what I could do, but I could sense no one wanted to really take it from the beginning. I saw the first was relatively slow from what everyone was capable of. I didn't want to run a five minute pace. I wanted to make a good effort — and truthfully — that probably gave me the best chance to win."

With a punishing front-running style, Smith the tone for what would be a blistering pace with the top three runners all averaging 4:50 or less per mile. That lead pack also included Meb Keflezighi, 41 of San Diego, who was the silver medalist in the marathon at the 2004 Olympics.

The lead was never safe, due largely to such a talented field.

The three took advantage of a tailwind in the first half-mile as they ran down Bayshore Boulevard. Landry and Keflezighi sensed Smith's distress nearing the 11-mile mark and started to close the gap.

By then there was a cross wind that turned into head wind, slowing the pace as they headed into the home stretch.

That is when Landry decided to make his move.

"Scott made us all earn it today because he was flying," Landry said. "About 5K left to go, about 2 miles, we turned around and hit that wind and it was so bad. I just waited and sat behind Scott. I stared at his feet, maintained contact. We hit that wind and everyone slowed and it just gave me that breather to get ready and drop the hammer at 11 miles."

Landry said he knew he could win in his Distance Classic debut after some strong finishes in workouts the past two weeks.