WASHINGTON — Sen. Marco Rubio said Tuesday that President Donald Trump's proposed defense spending increase doesn't go far enough but he expressed concern about cuts to other areas of the budget and said changes to Social Security and Medicare should... 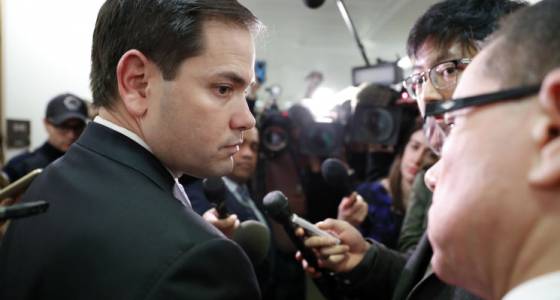 WASHINGTON — Sen. Marco Rubio said Tuesday that President Donald Trump's proposed defense spending increase doesn't go far enough but he expressed concern about cuts to other areas of the budget and said changes to Social Security and Medicare should be on the table.

"I don't expect you're going to hear that tonight," the Florida Republican said hours before Trump's speech to Congress, "but I think in the months to come as the reality sets in, we'll have to accept that."

Rubio has long called for changes to Social Security and Medicaid, but not for current recipients.

"I'm against anything that is bad for my mom," he told reporters. "I'm talking about me … our generation. It's either going to be bankrupt or it's going to work differently. What are we talking about in some cases? I'm going to have to retire at 68½ instead of at 68. These are not unreasonable requests to add some longevity and stability to these programs."

The president is calling for $54 billion in additional military spending with the cuts to come from other areas of the budget. But Trump is seeking to fulfill a campaign promise not to touch Social Security or Medicare and despite calls from some Republicans, the issue remains politically dicey.

"The longer we deny it," Rubio said, "the harder it's going to be to achieve" change.

Rubio said he wants to see details on proposed spending cuts and is concerned about loss of foreign aid — which makes up a scant amount of the overall budget — saying it could further destabilize parts of Latin American and Haiti.

And he asked, "Is this going to add wait times to being able to get a passport processed?"

He also said cuts to the EPA, an agency he has faulted, would result in a compliance backlog that affects Florida's agricultural industry.

Rubio has been meeting with Florida legislators the past two days, covering a range of issues from Everglades restoration to health care. Republicans are looking to dismantle the Affordable Care Act but that's proving more complicated than the "repeal and replace" campaign slogan.

"I understand that uncertainty breeds concern," Rubio said of the backlash being seen across the country. "The question is whether Obamacare as it is currently constructed works well for everybody and the answer is it does not. So our goal is to have a vibrant private market that's affordable and at the same time construct measures that allow us to serve people who are difficult to insure."

He said he's working with other stake holders to ensure any changes are "fair" to Florida, which has more people covered under Obamacare than any other state.

Rubio also discussed the congressional probe into Russian interference in the 2016 election. Asked if a special prosecutor is necessary, he said, "Not yet. Not at this time. We're beginning our work."

"What I can tell you is this: On my work on the Intelligence Committee, I am not going to be part of a cover-up and I'm not going to be part of a witch hunt. I want us to do the right thing. This is beyond partisanship. This is more than just about elections. It's about foreign governments being able to interfere with our political process. If the Intelligence Committee meets, and I believe it will do its work in a bipartisan and serious way, we want to put out the truth wherever it leads us.

"If it isn't that product. If it becomes anything other than that — a political thing to attack the president unfairly or an effort to sugarcoat what happened — I will be one of the first people out there (saying) that I do not stand by this committee's product. But we just started the work and so far, I remain optimistic that we're going to be able to deliver that kind of product. It's going to take some time, though ... we're dealing with some pretty sensitive things."