Russia and China vetoed a Western-backed UN resolution Tuesday that would have imposed sanctions on 21 Syrian individuals, organizations and companies allegedly involved in chemical weapons attacks in the war-ravaged country.The defeated Security Council... 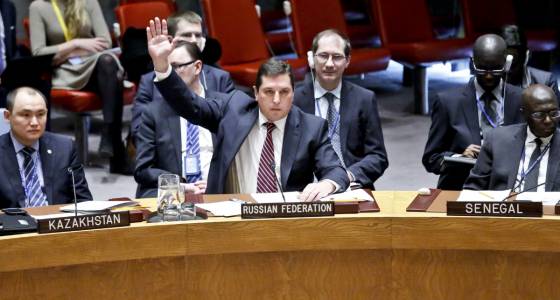 Russia and China vetoed a Western-backed UN resolution Tuesday that would have imposed sanctions on 21 Syrian individuals, organizations and companies allegedly involved in chemical weapons attacks in the war-ravaged country.

The defeated Security Council resolution would also have strongly condemned Syria’s use of chemical weapons and banned all countries from supplying President Bashar Assad’s government with helicopters, which investigators have determined were used in chemical attacks.

In Tuesday’s vote, the resolution got the minimum nine “yes” votes. In addition to China and Russia, Bolivia which is a non-permanent council member without a veto voted “no.” Three countries abstained — Egypt, Ethiopia and Kazakhstan.

The resolution was drafted following a joint investigation by the United Nations and the international chemical weapons watchdog that determined the Syrian government was behind at least three attacks involving chlorine gas and the Islamic State extremist group was responsible for at least one involving mustard gas.

Russia, Syria’s closest ally, joined the Western nations in establishing the joint investigation, known as the JIM, to determine responsibility for chemical attacks.

Russia’s deputy UN ambassador Vladimir Safronkov said Russia let it be known early on that it was “skeptical” of the JIM’s reports and the “uncorroborated nature of the conclusions.” He stressed that there was “no convincing evidence” to determine who was responsible for using chemical weapons.

The resolution, initially sponsored by Britain and France, was recently joined by the new United States administration of President Donald Trump.

“You decided on provocation when you knew well in advance our position,” Safronkov told the sponsors, stressing that the only way to resolve the Syrian conflict, now in its sixth year, is through co-operation — “and it’s high time we do so.”

Referring to “my friends in Russia,” Haley added, “it is a sad day in the Security Council when members start making excuses for other member states killing their own people.”

She said the United States has already put the 21 people and entities in the defeated resolution on the U.S. sanctions list and will urge the European Union and other countries to follow suit.

The 11 Syrians who would have been subject to an asset freeze and travel ban if the resolution had been adopted include Amr Armanzi, director-general of Syria’s Scientific Studies Research Center, which is responsible for the development and production of chemical weapons and the missiles to deliver them. Nine current and former military officers and the managing director of a Ministry of Defence subsidiary that assists in the production of chemical weapons were also named.

The 10 “entities” that would have been put on the U.N. sanctions blacklist and subject to an asset freeze include the Scientific Studies Research Center and several Syrian government subsidiaries, proxies, front companies and factories allegedly involved in producing chemical weapons.

A chemical weapon attack on a Damascus suburb that killed hundreds of civilians on Aug. 21, 2013, led to a U.S.-Russian agreement and a Security Council resolution the following month that ordered the destruction of Syria’s chemical weapons, precursors and the equipment to produce the deadly agents.

While insisting it did not stage the attack, the Syrian government supported the resolution and joined the chemical weapons watchdog known as the Organization for the Prohibition of Chemical Weapons, warding off possible U.S. military strikes.

Syria’s declared stockpile of 1,300 metric tons of chemicals has been destroyed, but the OPCW is still investigating outstanding questions about possible undeclared chemical weapons.