Two confident local teams, and just one available spot in the North Coast Section Division 6 boys basketball final. The math dictates that Wednesday's game at Rio Lindo Adventist Academy in Healdsburg should be an intense one. Just don’t expect any trash... 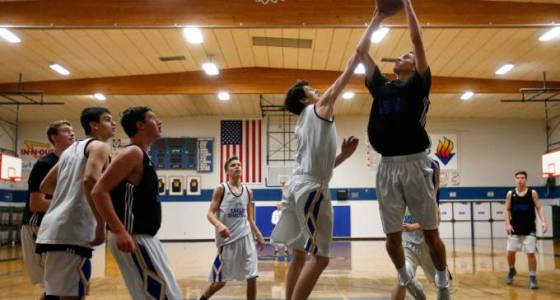 Two confident local teams, and just one available spot in the North Coast Section Division 6 boys basketball final. The math dictates that Wednesday's game at Rio Lindo Adventist Academy in Healdsburg should be an intense one. Just don’t expect any trash talk or stare-downs out of these squads.

Rio Lindo coach Kevin Hardesty had a similar take. He recalls a crucial moment in the teams’ first meeting, at RVC on Jan. 21, when the officials huddled to get a call right and a few of the home-team Eagles players began to plead their case. “One of their players went up to our kid who had taken the shot and said, ‘Good job. We’re complaining to the refs, not to you,’” Hardesty noted.

They may be pleasant kids. But only one team will advance to face the winner of the Laytonville-California School for the Deaf game in this year’s D6 championship.

No. 2 Rio Lindo (27-2) is a higher seed than No. 3 Rincon Valley Christian (16-11) and gets a home game. Regardless, the matchup should be a whopper if the first installment is any indication.

Rio Lindo took a 15-1 record into that game while Rincon Valley Christian was a mere 8-7. The action followed the script for much of the evening.

“In that game we had a good little run in the third quarter and got up by 12, 15 points,” Hardesty said. “We usually put teams away at that point.”

This time, Spartans point guard Julien Boyd subbed out for a while and RVC quickly closed the gap in his absence. Much of the fourth quarter went back and forth, and the score was tied when Rio Lindo called timeout with seven seconds left. With two fouls to give, Eagles coach Ted Nelson told his players to make contact with Rio Lindo. Nelson insists they did just that, but didn’t get a whistle until a Spartan hit a basket and drew an “and-one” with a second and a half on the clock.

Leng’s desperation shot at the buzzer did not fall and the Spartans escaped with a 55-53 win. It was a brutal loss for RVC, but Nelson and his players insist it made them a better team.

“They realized, yeah, we can hang with these guys,” Nelson said.

And the Eagles have been on the upswing since then. The improvement started on defense. Nelson freely admits his team wasn’t so good on that end of the court early on. By Feb. 11, RVC was taking on Petaluma, a much bigger school that would make the playoffs in Division 2, and holding the Trojans to 58 points in a narrow loss — without starting center Riley Bogue, who had rolled his ankle in practice.

“We played zone the whole game, 3-2; we’re typically a man (defense) team,” Nelson said. “And they really did a good job on the rotations, realizing that it’s a zone, but you’ve got to be guarding somebody. You can’t say, ‘OK, no one’s in my zone, I get the day off.’”

The Eagles have gotten better in less tangible ways, too. Their opponents from Rio Lindo have felt great chemistry throughout the season. That wasn’t necessarily the case at RVC. Again, things got better.

All games at 7 p.m. unless noted