WASHINGTON - On the campaign trail in Canton last summer, presidential candidate Donald Trump told U.S. Rep. Bob Gibbs that he'd overturn a controversial Clean Water Act rule if he made it to the White House. On Tuesday, the president made good on his promise... 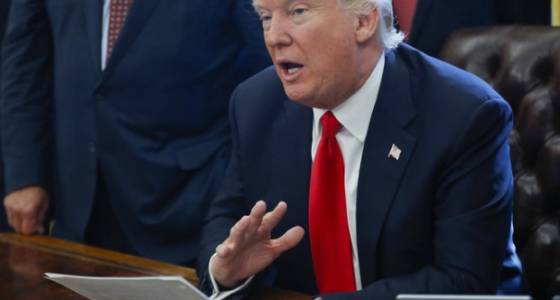 WASHINGTON - On the campaign trail in Canton last summer, presidential candidate Donald Trump told U.S. Rep. Bob Gibbs that he'd overturn a controversial Clean Water Act rule if he made it to the White House.

On Tuesday, the president made good on his promise by ordering the U.S. Environmental Protection Agency and Army Corps of Engineers to revise the rule that expanded the definition of waterways subject to Clean Water Act oversight.

Gibbs - a Holmes County Republican who repeatedly forwarded legislation to overturn the EPA's "Waters of the United States" rule - watched Trump sign the paperwork in the White House Roosevelt Room.

"All this was going to do was increase the scope of the federal government and add more cost and more potential litigation," said Gibbs.

Gibbs said the state of Ohio already regulates the disputed turf, which includes roadside ditches and other low areas that sometimes fill up with water, and involving the federal government created a minefield for farmers and land owners.

Trump called the measure he overturned among the worst examples of federal regulations that have "run amok," costing jobs, and "treating our wonderful small farmers and small businesses as if they were major industrial polluters."

"A few years ago the EPA decided that navigable waters can mean nearly every puddle or every ditch on a farmer's land or anywhere else that they decide," Trump said as he signed the order. "It was a massive power grab."

More than a dozen states, including Ohio, sued the federal government over the rule and put its enforcement on hold during the legal challenges.

When he filed the case, Ohio Attorney General Mike DeWine accused the EPA and the Army Corps of overreach, saying the rule extended federal regulatory authority over "almost every conceivable water tributary in the country and even adjacent dry land and dry creek beds, with little limit on federal jurisdiction."

"Any effort to replace this illegal rule with common-sense regulations will be welcome and is sorely needed," DeWine spokesman Dan Tierney said after Trump's order.

Proponents of the rule said it would protect streams and wetlands by more clearly defining which ones were protected. Former EPA administrator Gina McCarthy had argued that "for the waters in the rivers and lakes in our communities that flow to our drinking water to be clean, the streams and wetlands that feed them need to be clean too."

"Instead of protecting the things we hold dear like our tap water, our rivers or our health, President Trump is, once again, protecting big polluters," said Natural Resources Defense Council president Rhea Suh.