Here we are now, entertain us . . . with Pogs!The popular craze from the early ’90s made a comeback Saturday at St. Luke’s United Church gym.To a soundtrack of Nirvana, Dude Range-era Blink 182 and some excellently curated Destiny’s Child,... 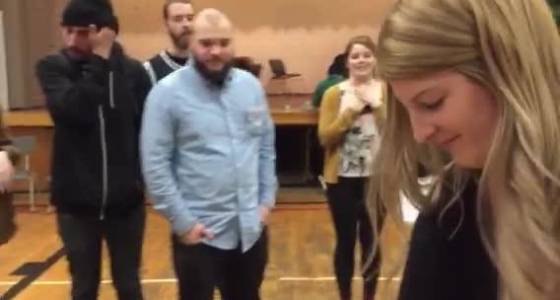 The popular craze from the early ’90s made a comeback Saturday at St. Luke’s United Church gym.

To a soundtrack of Nirvana, Dude Range-era Blink 182 and some excellently curated Destiny’s Child, about two dozen Pogs aficionados held what might be Toronto’s only Pogs tournament of this century.

The gym was jumpin’, jumpin’ as players slammed the stacks of cardboard discs, cheering each other and raising money for Sick Kids hospital.

Nolan Ridge was the man behind the action.

“I played when I was a kid. I had the whole Goosebumps set but I gambled them away in a game against my cousin Dan and I lost most of them,” he said. “So I just gave rest to Dan and told him that whatever he did, just keep the set together. I didn’t play again for years.”

But in his 20s Ridge eventually overcame the heartache and started looking for a set of Pogs online. He found someone selling 4,000 of the them online for $200 — plus $150 just for shipping.

“They had to ship all the way from Hawaii, which is actually where Pogs originated,” he said.

The game has its roots in the 1920s and ’30s when kids would use the wax-lined discs from milk jug lids to play with.

The rules are simple. Stack up a bunch of Pogs face down, each player wagering his or her own Pogs in the pile. Then, players take turns hitting the stack with a thicker, heavier Pog called a “slammer.” Each player keeps whatever Pogs land face up.

Playing for keeps is where the real fun comes in. When Pogs were at their peak in the early 1990s, Ridge said, the company that made them — Haleakala Dairy — was shipping more than two million of them world wide.

Earlier this winter, Ridge and his girlfriend were trying to decide how to spend an evening at home. Unable to decide on a movie, Ridge suggested Pogs and the two played for hours.

At one point, Ridge mused, “I really wish I could play in a tournament.”

But like most fads of the ’90s, Pogs had faded, like the ill-advised denim of the same era, and tournaments were hard to come by.

So Ridge decided to start advertising and collect donations for a raffle. And on Saturday about two dozen players squared off in the gym.

For $10, players got a small set of Pogs and a slammer to keep, and a couple hours of fun. All told, the tournament raised $1,000 for Sick Kids, which was more than Ridge had been hoping for.

Given the success, he said he plans to stage more tournaments in the future.