FORT MYERS, Fla - Phil Hughes’ return from shoulder surgery was eventful, bumpy, but ultimately a success on Saturday, and Byung Ho Park provided the Twins’ first home run of the spring. But Boston rallied from a five-run deficit against the Twins’... 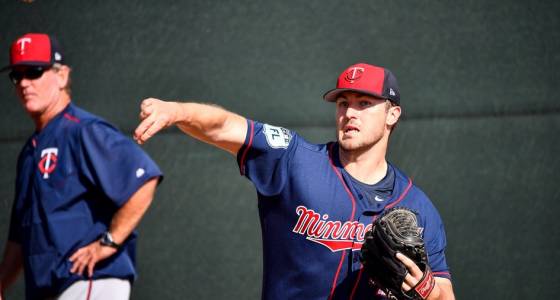 FORT MYERS, Fla - Phil Hughes’ return from shoulder surgery was eventful, bumpy, but ultimately a success on Saturday, and Byung Ho Park provided the Twins’ first home run of the spring. But Boston rallied from a five-run deficit against the Twins’ bullpen, and eventually pulled out an 8-7 Grapefruit League victory over Minnesota at JetBlue Park.

Boston outfielder Brian Boguesevic bounced a single through the infield in the eighth inning, scoring Deven Marrero from third base and competing the Red Sox’ comeback from the Twins’ early 7-2 lead. Marrero led off the inning with a double to deep right-center off Twins reliever J.T. Chargois, and moved to third on a ground out, setting up Bogusevic’s game-winner, which dropped the Twins to 0-2 this spring.

But the best news for the Twins was Hughes’ spring debut, after his 2016 season was ruined by shoulder pain, a broken knee, and ultimately surgery to treat thoracic outlet syndrome by removing a rib. Hughes had difficulty finding the strike zone early on, and paid for it with three hits to Boston’s first four batters. Dustin Pedroia led off with a double high off the left-field wall, Mookie Betts singled, and Hanley Ramirez doubled as well.

But Hughes induced five straight ground balls after that, only one of which resulted in a hit. His two innings included four hits, two runs and no walks or strikeouts. Plus, plenty of optimism.

“I was a little shaky early, trying to find my command, but I felt like I made a couple of decent pitches to get a double play” in the second inning, Hughes said. “It’s a good first step.”

ark launched a long home run to center field in the second inning, his third hit of the spring, and drove in another run with a sacrifice fly in the third. The Twins strung four singles, a walk, and a two-run double by Matt Hague to build that lead. Aaron Lavinsky, STAR TRIBUNE Minnesota Twins pitcher Phil Hughes.

But Ryan Vogelsong allowed three runs — albeit two of them unearned, due to some shaky Twins defense — and Adalberto Mejia, Ryan Pressly and Chargois all gave up a run apiece.