Recently acquired pitcher Gabriel Ynoa made his Orioles exhibition debut Saturday afternoon and struggled through a rocky first inning before settling down to retire all three Pittsburgh Pirates batters he faced in the second.He allowed a run on three hits... 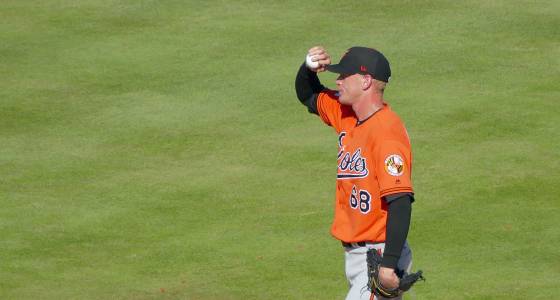 Recently acquired pitcher Gabriel Ynoa made his Orioles exhibition debut Saturday afternoon and struggled through a rocky first inning before settling down to retire all three Pittsburgh Pirates batters he faced in the second.

He allowed a run on three hits and struck out one over those two innings in the Orioles’ 6-2 loss to the Pirates at LECOM Park.

“In the first inning, I was going too quick toward home plate," Ynoa said through interpreter Ramon Alarcon. “In the second inning, I was more calm, under control, so I think that was the difference.”

The Pirates put pressure on him from the beginning, attempting a pair of stolen bases in the first inning, but neither was pivotal. The run scored on a double by Andrew McCutchen and an RBI single by Gregory Polanco.

The Orioles scored in the fourth inning on a leadoff double by Adam Jones and an RBI single by Rule 5 outfielder Anthony Santander. They added one in the ninth on Robert Andino's would-be double-play ball that the Pirates failed to convert. Johnny Giavotella scored on the play.

Right-hander Jason Garcia pitched a difficult 1 2/3 innings, allowing two runs on four hits and a walk to take the loss. Parker Bridwell got the first two outs of the eighth inning before giving up back-to-back homers to Chris Bostick and Jin-De Jhang.

Every Orioles player headed to the World Baseball Classic was scheduled to start Saturday’s game, but Welington Castillo woke up with a neck spasm and probably will get the next couple of days off. Manny Machado and Jones were in the starting lineup and reliever Mychal Givens came out of the bullpen to pitch the third inning.

Jones, batting cleanup, doubled in his second at-bat and had an outfield assist in the fifth inning. Jonathan Schoop also doubled, but Machado went hitless in three at-bats. Givens pitched to four batters in the third inning and allowed just a walk.

Perez has an active day

Catcher Audry Perez started behind the plate and immediately threw out leadoff man Adam Frazier trying to steal second base in the first, but his afternoon didn’t go quite so well after that. He allowed a stolen base to Polanco later in the first inning and also allowed one to Starling Marte in the third.

First base prospect Trey Mancini has gotten a lot of playing time in the first two Grapefruit League games and gotten mixed results at the plate. He had a hit in the opener against the Detroit Tigers, but struck out all three times up on Saturday and left five runners on base.

Preston Palmeiro, the youngest son of former Orioles star Rafael Palmeiro, joined the club on the road for the second straight game. He made his exhibition debut Friday, pinch running and playing the final two innings at first base.

Manager Buck Showalter said before the game that he didn’t prefer to play a Single-A kid in a major league exhibition game. But with David Washington hurt and both Chris Davis and Mark Trumbo staying back, it allowed the Orioles to take a peek at Palmeiro.