Once Upon A City: When Communists were elected to office | Toronto Star

Communists elected to Toronto city council? Communists in the Ontario legislature?That’s right, comrade. While Communists running for election today don’t register big numbers at the polls, the city and province were different places in the... 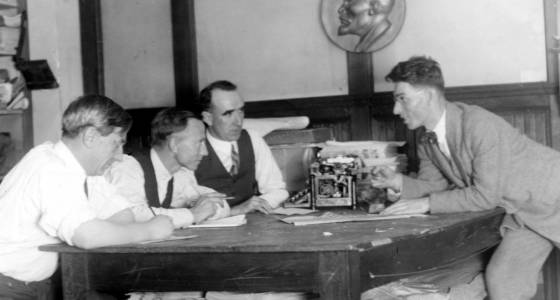 That’s right, comrade. While Communists running for election today don’t register big numbers at the polls, the city and province were different places in the Depression-era 1930s and the 1940s. A number of Communists were elected to public office, representing wards and ridings that had many immigrants, factory workers and lower-income Canadians.

It was all the more remarkable because it wasn’t easy being a Communist in Canada decades ago.

The Communist Party of Canada had been founded in 1921 at a “secret meeting” held in a barn near Guelph, according to the Canadian Encyclopedia. It called itself The Workers’ Party of Canada because the War Measures Act was still in place and Communists were outlawed. When the WMA lapsed in 1924, the party took up the Communist moniker.

From the party’s inception, members were hounded by the RCMP and some municipal police forces using Section 98 of the Criminal Code (which banned unlawful associations and the use of force or violence to effect change), enacted after the 1919 Winnipeg General Strike. Meetings were broken up, party offices raided, members harassed and sometimes beaten up.

In the late 1920s and 1930s, Toronto’s Chief Constable Dennis Draper was well-known for his policies of disrupting left-wing gatherings, often by using police on horseback, who became known as “Draper’s dragoons.”

The Toronto Daily Star, while expressing no love for Communists (they are “few and unimportant’’) in an Aug. 15, 1929 editorial, nonetheless went on to denounce the violent methods used by police to break up a Queen’s Park meeting attended by Communists and members of the public: “police with horses, motor cars, batons, boots and fists attacked the Communist leaders particularly, and bystanders at random ... hundreds of good citizens saw men who were not Reds at all mauled and mishandled by police.”

In 1931, the Communist party offices in Toronto were raided and leader Tim Buck and seven others charged with violating Section 98 (it wasn’t repealed until 1936). Buck was convicted in 1932, sentenced to five years and sent to Kingston Penitentiary. In October, 1932, he was the victim of an assassination attempt during a prison riot that he did not participate in. Five or six shots were fired through a window into the cell, where he was sitting. He barely missed being hit. Buck later told the Star that one bullet “passed through his hair’’ and another “whistled by his neck.’’

Following the shooting, Albert Smith, another prominent Canadian Communist and former Methodist minister, gathered 459,000 signatures on a petition demanding an investigation into the shooting and the repeal of Section 98. He met with Prime Minister R.B. Bennett in November 1933 but Bennett refused to take any action and told Smith to “get out” of his office, according to an account in author Pierre Berton’s book, The Great Depression, 1929-1939. Later, at a Toronto protest rally in January, 1934, Smith spoke of the attempted assassination and said: “Was not the government of the day to be held responsible?’’

Two weeks later he was charged with sedition “with the intention of spreading discontent, hatred and distrust of the government.” But the charge was not popular, as Berton, a former Star columnist, points out in his book: “To many Canadians Smith’s opinions didn’t sound seditious.”

Opposition politicians were always fomenting distrust of the government; what was wrong with spreading discontent?’’

At a Toronto rally in February, Smith called for an investigation and defended his right to speak out: “No judge is beyond criticism, no government is beyond criticism.” (Prime Minister) Bennett was “inflated with the gases of his own decomposition,” a Star story reported him saying.

At trial, Tim Buck was brought in as a defence witness and was able to blurt “I was shot at” before the Crown could object and silence him. Smith was acquitted.

A few months later, in late 1934, Buck was released after then-federal minister of Justice, Hugh Guthrie, admitted in the House of Commons, that the shots had been deliberately fired at Buck but “just to frighten him.”

The Communist leader returned to Toronto where he was met at Union Station by a 5,000-stong “sea of shouting, joy-mad supporters” who carried him “shoulder high,” the Star reported. At a support rally the next month, Buck attracted 17,000 to Maple Leaf Gardens, with 8,000 turned away.

In 1937, Buck ran in the civic election for a seat on Toronto’s Board of Control, which had many powers, like the ability to award tenders. He garnered 44,248 votes, losing the seat by only 154 votes.

While Buck had been in prison, Stewart Smith, son of Albert Smith and a Communist as well, had served as an acting leader of the party.

In 1936, Stewart Smith ran for election in Toronto as Ward 5 (Trinity-Bellwoods) alderman and won. He kept his seat in the 1937 election and was joined on council by another Communist and popular community activist, Joe Salsberg, representing Ward 4 (Kensington Market and Garment District).

The immigrant son of a peddler, Salsberg had left school at age 13, to work in a garment sweatshop, while studying at night to become a rabbi. By age 16 he had dropped his rabbinical aspirations and had become active in trade unionism, joining the Communist party in 1926.

In its 1937 post-election editorial, the Star noted that the success of the Communists and other left-leaning aldermen was a “compliment’’ to Ald. Smith’s “excellent work” as an alderman. The two aldermen seemed focused on practical ways to help ordinary people.

In 1938 Ald. Salsberg asked that there be two men on TTC streetcars for better service and safety. Smith suggested that council consider submitting the annual civic budget just before the election so voters would know what was in store. It went nowhere.

Salsberg was accused during a debate on city parks of being a Communist patsy and quipped: “You’re right. I got a telegram from Joe Stalin this morning ordering me to ask for a park for Ward 4.”

The year 1940 was pivotal for Canadian Communists. The party’s initial opposition to the Second World War led it to being banned under the War Measures Act. Many Communists, like Tim Buck and Stewart Smith went into hiding in 1940. Smith eventually came forward, was arrested and served two weeks in jail before being released in the early ’40s. Salsberg was jailed in 1942 for several months for being a member of the Communist Party and evading military registration.

Both Salsberg and Smith would return to the political arena.

Smith ran for Toronto Board of Control in 1945 and won, polling 41,691 votes. Time Magazine did a story about the “Red Controller” stating that “for a city considered a conservative stronghold, this was a remarkable showing.” Smith won another term in 1946 but was defeated in 1947. Anti-Communist feeling was rising. A Dec. 30, 1946 ad for a Board of Control candidate, which ran in the Star, targeted Smith and suggested voters should “veto Moscow meddling in Toronto’s civic affairs.”

He would later quit the Communist party in 1957, following revelations of crimes in the Soviet Union. He went on to build a chain of discount drugstores, retiring in 1978 and selling the business to Shoppers Drug Mart.

Joe Salsberg, would run for a provincial seat in the 1943 election, representing the downtown riding of St. Andrew, under the “Labour’’ banner, and win resoundingly. Elected the same year was another Communist, A.A. MacLeod, a First World War vet who represented Toronto Bellwoods and who also ran under “Labour.’’ (He was uncle by marriage to actors Shirley MacLaine and Warren Beatty).

After the election Salsberg and MacLeod formed the “Labor-Progressive Party.” Both served a number of terms. According to biographer Gerald Tulchinsky (Joe Salsberg: A Life of Commitment), Premier Leslie Frost once referred to Salsberg and MacLeod as having “more brains than my entire backbench put together.”

Defeated in 1951, MacLeod went on to become one of Frost’s speech writers. He left the Communist party in 1956.

Salsberg was key to getting the Racial Discrimination Act (1944) passed which prohibited the publication and display of signs expressing ethnic, racial or religious discrimination.

By the early 1950s, anti-Communist attitudes had hardened. In a Jan. 15, 1951 front page Star story, the president of the Ford Motor Co. told a businessmen’s meeting that Canada should padlock the doors of halls “where Commies hang out” and that Communism was “a stench in the nostrils of every decent Canadian.”

When Stalin died in 1953, Salsberg eulogized the Soviet leader on the house floor, causing a minor uproar. Minister of Labour Charles Daley remarked: “I don’t know how it can be done but I think that should be stricken from the record.” In the 1955 election Salsberg lost his seat.

Keywords:
Communist Party Of CanadaOnce Upon A CityToronto History
Comments