Once set for demolition, Mary Bethune apartments may rise above West River

TAMPA — The Mary Bethune High Rise Apartments provided low-cost housing for Tampa seniors for 50 years before it was scheduled for a date with a wrecking ball.8 Months Ago6 Months Ago5 Months AgoDemolition of the apartments and of the sprawling North Boulevard... 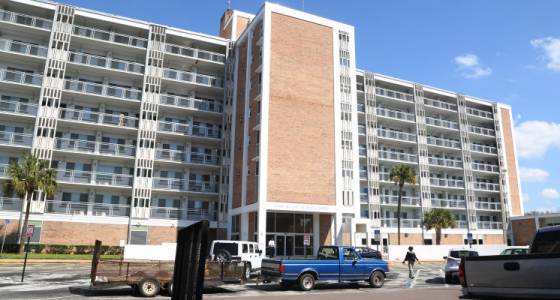 TAMPA — The Mary Bethune High Rise Apartments provided low-cost housing for Tampa seniors for 50 years before it was scheduled for a date with a wrecking ball.

Demolition of the apartments and of the sprawling North Boulevard Homes public housing project was to make way for the West River project, the authority's ambitious plan to revitalize the area west of the Hillsborough River with a walkable community.

Now, the aging eight-story apartment tower block close to Interstate 275 in downtown Tampa may have won a reprieve.

Tampa Housing Authority officials now say they are planning an extensive rehabilitation of the 1966 building to again provide senior housing and they plan to modify the West River plan to accommodate it, said Leroy Moore, Housing Authority chief operating officer.

"The structure seems to be salvageable," Moore said. "Both our developer and we are pursuing that as an option."

The idea came from similar projects in Miami such as the Jack Orr Plaza, a 1975 12-story tower block that was restored by Related Group, the developer the Housing Authority is partnering with on the West River project.

"We could potentially close in the next 12 months and be under construction as opposed to doing work to secure funding," Moore said.

Named for a South Carolina-born educator and civil rights activist, the Bethune complex has 150 units, including some efficiencies and two-bedroom apartments. Most of the structure — including many interior walls — is built of concrete blocks with terrazzo flooring.

The cost to transform the building is not yet known but Moore estimates up to $70,000 per unit.

A small group of Tampa tenant leaders toured some of Miami's restored buildings Feb. 16, including Jack Orr Plaza, as part of a Housing Authority plan to get resident feedback on the Bethune proposal.

"We wanted to give them a firsthand view of substantial rehab projects so they understand this is practically new construction without tearing down the structure," Moore said.

Under Housing Authority rules, seniors who were relocated out of Bethune would have the option to return once it is completed, Moore said. Rent is typically charged at one third of resident's income.

The Housing Authority staff is still busy at Bethune even though the building is now unoccupied. Window air-conditioning units that can be salvaged are being sold or donated to charities.

Saving Bethune means a slight redesign of the West River master plan. Union Street, which was to be demolished, would now be retained.

It would also give West River an eight-story building that enjoys views of the Tampa skyline to the south and Raymond James Stadium and the Hillsborough River to the north. The original West River plan has mostly five-story buildings.