Divyesh Desai loves what he does. For the past 17 years, he's run one of Easton's older businesses -- Lu-Co Tobacco Outlet, which has been around since the mid-1930s. As people came into the store one recent day in the 200 block of Northampton Street, Desai... 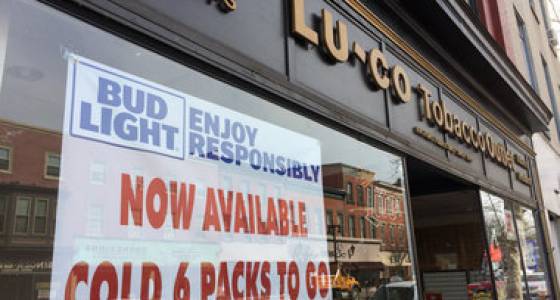 Divyesh Desai loves what he does.

For the past 17 years, he's run one of Easton's older businesses -- Lu-Co Tobacco Outlet, which has been around since the mid-1930s.

As people came into the store one recent day in the 200 block of Northampton Street, Desai knew each patron's name and struck up a brief conversation before ringing up a purchase or selling some lottery tickets.

It's clear the nearly 55-year-old from Bethlehem and his wife, Mita, very much enjoy the social nature of their customer interactions.

But last fall, the cigarette business went from lucrative to losing as Pennsylvania increased its tax per pack to within a dime of the New Jersey tax. Suddenly Lu-Co's markets in New Jersey and New York dried up.

The Desais needed a new idea or they weren't long for the Downtown.

"It was time to diversify," Divyesh Desai.

The parents of a 24-year-old and a 19-year-old ran through any number of ideas, finally realizing if the state could take, it could give as well.

They saw big grocery stores selling beer and wine. Why not try that, but on a smaller scale, they figured.

The revised liquor laws in Pennsylvania allow the owner of a restaurant liquor license to sell six-packs of beer and individual bottles. With an "extended permit," a business can offer wine as well.

So, in recent weeks, armed with the Brickhouse Tavern's liquor license and an extended permit, the Desais have been selling beer and wine in addition to cigarettes and other tobacco products.

"Right now we are a pickup location," Divyesh Desai said.

A decision will be made between now and a proposed grand opening possibly in March whether they will start to sell food so people can drink in the store. There are tables lined up near the beer coolers, but at the moment they are covered with beer bottles.

The business sells a selection of craft beers, imports, local brewery offerings and "a whole selection of wines," they said.

Also offering up good eats would make sense, he said.

"We kept the business in town," he said. "We've been here so long. We didn't want to leave town."

Since they started selling alcohol, they've met more locals, something that pleases the Desais.

"We're serving the needs of Downtown Easton patrons," he said. "... I think we're serving a different clientele. Those and new customers. Some regular customers. Some are not users of tobacco but they love their beer. We're meeting more local people that we didn't know before. We like meeting new people."

He figures they're providing a service that's not offered in the neighborhood.

"In a bar you won't find the selection," he said, adding his offerings will grow over time. "Once we have the grand opening, I expect to have different products on the shelves."

"It's too early to tell" if the beer business will allow them to not just survive but to thrive, he said. "The positive response is keeping us hopeful. We might be able to survive the loss of tobacco sales."

Even though a craft beer six-pack can cost up to $14, patrons can mix and match single bottles and get to taste before they make a more significant investment in a specific beer.

"They like the price too," he said. "We've kept prices very reasonable."

While his neighbor in the tobacco business has tried another tactic -- for years Jack Desai (no relation) at Jack's Market has had an application for a beer distributor's license on his front window -- Divyesh Desai says he doesn't want to judge.

"All I can say is good luck to him," Divyesh Desai said. Easton Mayor Sal Panto Jr. has opposed the distributorship, but didn't respond to an email asking about Lu-Co's new offerings. Another Downtown business leader also declined comment on the business.

Now that he's in the beer and wine business, Divyesh Desai and his staff needed to learn how to deal with "VIPS (Very Intoxicated People)," he said.

"We had to go through RAMP training," he said. "It's one day's training. Like always, we want to comply with what we can."

The certificate of completion, a state requirement, hangs to the rear of the store.

So far, they haven't had to put the training to use.

Divyesh Desai has "no idea" what he would have done had the store closed, as a fourth Downtown tobacco outlet on the next block appears to have done.

"We would've done whatever to survive," he said.

But now, at least for a time, that's not an issue.

He wants to talk to local breweries and wineries about hosting tastings.

To get city and liquor control board approval, "we had to represent ourselves as a respectful store," he said. A zoning variance was needed because there's no rear loading dock -- they ask their delivery drivers to come early in the morning to limit the impact on Northampton Street traffic.

It took a couple of weeks to get the stock in and to tie the sales into the computer. But the new business is building, he said.

"The town has been very responsive," he said. "Everybody likes it."