OK, Trump twetes [sic] before he thinks. So what?

Remembr speling?Neither does our president. In his first tweet as POTUS — posted at 11:57 a.m. on Jan. 21 — realDonaldTrump tweeted, “I am honered [sic] to serve you, the great American People, as your 45th President of the United States!”... 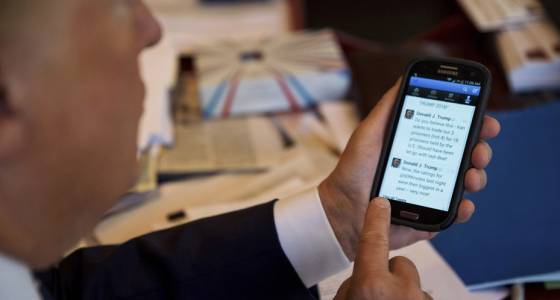 Neither does our president. In his first tweet as POTUS — posted at 11:57 a.m. on Jan. 21 — realDonaldTrump tweeted, “I am honered [sic] to serve you, the great American People, as your 45th President of the United States!” (He later deleted the message.)

He governs as he campaigned. As the Washington Post’s Dana Milbank pointed out in a delicious evisceration headlined “Trump attaks and dishoners English,” Trump has managed to mangle gimmes like “shocker” (“shoker”) and “choker” (“chocker”), as well as second-round spelling-bee softballs such as “instincts” (“insticts”) and “unprecedented” (“unpresidented”).

Now all of Washington, perhaps inspired by the man at the helm, is swimming in a sea of typos.

“No dream is too big, no challenge is to [sic] great,” reads the inauguration poster recently removed from the online store of the Library of Congress.

On Feb. 6, the White House released a list of 78 terrorist attacks it claimed the media had underreported. The list itself was tragically underconsonantalized: Attackers had become “attakers,” San Bernardino was allotted a single “R,” and Denmark got domesticated to “Denmakr.”

Six days later, the Department of Education tried to tweet an inspiring quote (“Education must not simply teach work — it must teach life”) from civil rights activist and historian W.E.B. Du Bois. Just one problem — or two, depending on how strictly you grade your students’ papers: The education mavens had spelled his last name “DeBois.” Four hours later came the predictable correction tweet: “Our deepest apologizes [sic] for the earlier typo.”

Does any of this matter? By devoting ink or pixels to the topic, don’t we simply prove the populist point about out-of-touch coastal elites?

Once you stop laughing, some useful correctives emerge:

If you can’t figure out the proper arrangement of 26 little letters, what does that say about your larger enterprise?

When you find yourself saddled with a slap-dash reputation, it’s time to slow down.

As a copy editor at Time-Life Books in the early 1980s, I was made vividly aware that perpetrating — or merely perpetuating — a typo was a dismissible offense. That may sound harsh, but excellence in publishing extends all the way down to taking care that “minuscule” and “desiccate” are spelled in the quirky-but-correct way they demand. (This mind-set also explains why I never told my boss about those 2 million direct-mail brochures for Time-Life’s Civil War series that went out with “Southern gentlewomen” rendered as “Southern gentilewomen.”)

Misspellings can be haunting even for non-celebrities. New York literary agent Lynn Johnston says she tries “to block the worst offenders from my mind — they’re too painful.”

She’s talking about her own career-capping typos, mind you, not those committed by the writers she represents. As director of membership recruitment for the American Bar Association in the early 1990s, for example, Johnston oversaw the preparation of a marketing brochure intended to address “public lawyers.” Instead, Johnston rues to this day, “The ABA appeal went out to ‘pubic lawyers.’ ”

Henry Fuhrmann, the retired assistant managing editor for copy desks and standards for the Los Angeles Times, was in the middle of teaching a journalism class at USC when I reached him — via Twitter — so I couldn’t tell whether haste or mortification inspired his curt answer to my query about erratacism:

I did. Assigned to shepherd into print a story containing the sentence “But cracks eventually appeared in Lamb’s public persona,” Fuhrmann’s copy desk experienced a conjunction dysfunction that yielded “the best typo to ever run in The Times,” as Tessa Stuart of LA Weekly dubbed it.

“It makes for a fun anecdote,” Fuhrmann later conceded. “In retrospect.”

No one, evidently, is immune. And messages composed in the heat of the social-media moment routinely betray their spontaneity — I get that. But when you have 1.07 million Twitter followers and run a $69.4 billion federal agency with 4,400 employees — or let’s say you have 25 million followers and run the country — you should probably hire a proofreader to catch, at the very least, the obvious stuff.

Mr. Precedent, now that you’ve visited CIA HQ and reassured the spooks you have their backs, may I offer a reciprocal guarantee? The next time you’re tempted to express yourself online, ask an intern to scan your Android screen before you press “Tweet.”

Cultur comes from the top.

Allan Fallow, who tweets as Conan the Grammarian, is a writer and editor in Alexandria, Va. He wrote this article for the Los Angeles Times.