The No. 7 Montgomery boys basketball team registered a comeback for the ages on Friday night in a NCS Division 2 quarterfinal game.Trailing 30-17 at halftime against No. 2 Las Lomas on the road, the Vikings rallied to win 50-45 and live to play another day.“It... 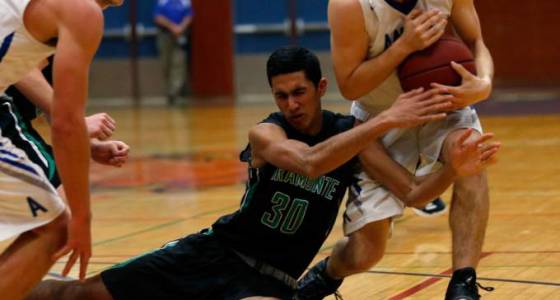 The No. 7 Montgomery boys basketball team registered a comeback for the ages on Friday night in a NCS Division 2 quarterfinal game.

Trailing 30-17 at halftime against No. 2 Las Lomas on the road, the Vikings rallied to win 50-45 and live to play another day.

“It was a great comeback. It shows the character of our guys,” Montgomery coach Zac Tiedemann said. “At halftime I thought we were really playing well. We kept our composure.”

Montgomery (24-5) outscored Las Lomas (Walnut Creek) 15-9 in the third quarter followed by a 17-6 dagger in the fourth quarter to give the Vikings the victory.

“In the second half our defense was solid,” Tiedemann said. “We held them to one field goal in the fourth quarter. We played at a slower, methodical pace, which Las Lomas isn’t used to.”

Montgomery was led by Evan Poulsen with 20 points, 8 rebounds and 4 assists. Ryan Merriken added 16 points for the Vikings.

Montgomery hosts No. 6 Tamalpais in a Wednesday night semifinal. Tamalpais defeated the Vikings by five points in a holiday tournament in December.

The favored No. 3 Cardinals went down at home unexpectedly to the No. 6 Red Tailed Hawks in the Division 2 quarterfinal matchup.

The sudden end — the first loss at home for the Cardinals this season — caps their season in a starkly different and unsettling manner than what the Cardinals were hoping for.

“It’s disappointing to have our first loss at home, but give Tamalpais credit. They came in here and beat us in front of a packed house,” Cardinal Newman coach Tom Bonfigli said. “It’s too bad we didn’t play better. We were never really in control of the game.”

The Cardinals (23-6) were up 51-50 with three minutes to play but let the game slip away, getting outscored 10-3 in the homestretch.

“We made some bad shot selections late in the game. Tamalpais (20-10) made shots and we didn’t,” Bonfigli said. “It was not one of our better games defensively.”

Cardinal Newman was led by Cody Baker with 21 points and Damian Wallace with 11 points. Cardinal Newman won the battle of the boards 36-26, with Jalen Dural hauling down 15 rebounds and Gavin Dove 10 for the Cardinals.

The key for Analy was a huge second quarter that saw Analy post a 26-3 advantage after trailing 17-5 after the first quarter.

“The second quarter, that was the game right there,” Analy coach Brett Page said.

“After the first quarter it wasn’t looking good for us. In the second quarter we started some matchup switches and finding open shots and our guys started hitting shots.”

Analy held a 9-2 edge in converted 3-point shots in the game.