Mr. Trump, open the envelope, please - and Shizam! It's all a huge mistake! Garrison Keillor (Opinion)

Garrison KeillorCourtesy of Washington Post Writers Group  "Maniacal" is not a word you care to hear about the president of the United States, especially not from his close adviser. Previously, "maniacal" was reserved for the Joker, Doctor Doom,... 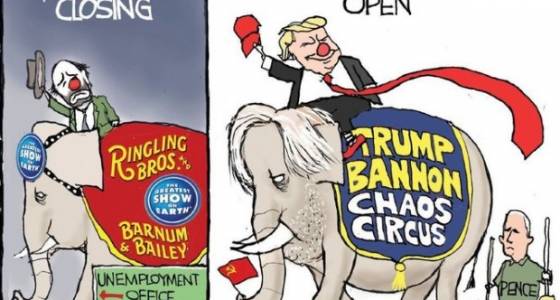 "Maniacal" is not a word you care to hear about the president of the United States, especially not from his close adviser. Previously, "maniacal" was reserved for the Joker, Doctor Doom, Dr. No, Lex Luthor, and the boy fuehrer of North Korea, but there it was, uttered by Stephen Bannon to the conservatives congregated in Washington -- "maniacally focused" -- which tells you why Mr. Bannon is not allowed out very often: He would scare the bejabbers out of the good Republican voters in the Midwest. He is a Crusader and out here in flat country, where we don't have huge boulders to hide behind, we try to get along with the neighbors.

"Maniacal" does not jibe with the sluggish Trump we've seen the past month, the placid scowl, the rambling rants against the media, the weary performer going through the motions of a role that doesn't particularly engage him. Maybe Mr. Bannon meant "monotonously focused" or "very focused for a mannequin" or maybe he meant to say "many locusts."

What the president has going for him, his trump card, is the air of danger he gives off, the chance that he may suddenly come unhinged -- not since 1974 have so many Americans thought the Current Occupant might be wacko. That is what keeps him in the news every day.

But you watch the man do his routine, and the eyes look dead, the face is slack. Everybody used to have an old uncle like him, and Trumpology is simply that old uncle with better lighting.

(1) Who are all these foreigners? Where'd they come from all of a sudden? How come they don't speak English? What's going on? What the hell is falafel?

(2) Newspapers. Bunch of crap. You can't believe a word you read. Who makes this stuff up?

(3) Criminals running loose in the streets. I say, take the handcuffs off the cops. A little brutality wouldn't hurt, believe me.

(4) Everywhere you look, you got government inspectors saying, Don't do this, don't do that. It's ridiculous. Cut the red tape.

(5) What's with the foreign aid to all these countries? Let 'em take care of themselves. Time to look after Number One.

(6) Higher education? Ha. I didn't need it and neither does anyone else. Get a job.

(7) The problem with this country is politicians. Get rid of them and put people in charge who know how to run things: generals and business leaders.

The uncle has the inside dope and what he knows is that we're on the verge of disaster, thanks to our enemies. It used to be the Jews and the blacks and now it's the Mexicans and Muslims, but the rant is the same. And now the dotty uncle is in charge of the nuclear code. Ian Fleming couldn't have dreamed up anything better.

I took my mind off the old uncle by going to the circus last week to see horses gallop around the ring side by side, a man standing on each, a woman with a foot on each man's shoulder, doing the splits at a gallop. Stupendous! The big cats leap to their stools and snarl at the man with the whip. Eight men on motorbikes race around a steel mesh globe at top speed, crisscrossing within inches of each other. And high above center ring, the aerialists do impossible triple somersaults into the hands of the catcher. And when it is all over, you feel cleansed, all of your anxieties exhausted.

The circus my Dad took me to was under canvas, three rings, yowsa-yowsa-yowsa, and it had a freak show that included, as I recall, the Wild Man of Borneo who stood in the back of his cage going boogeda-boogeda-boogeda and then leaped out screeching and bounced off the bars, terrifying a few small children in the meantime. He was maniacally focused and we thought he might bust loose and rip our heads off. He did not.

The old showman who addresses Congress faces a savvier crowd than at his rallies last summer and fall. His old routines are not exciting anybody and he's only been in town a short time.

The envelope revealing "Moonlight" as the true winner of the award for best picture at the Oscars Sunday.Chris Pizzello, Invision, AP

Maybe he could open an envelope at the podium and announce the total repeal of Obamacare (a disaster!) and then a guy in a tux rushes in -- wrong envelope! -- and the real winner is universal health care just like in other countries. Front page news on Wednesday! He can worry about Thursday when the time comes.