The latest news and developments to help you get ready for the day ahead.1 Hour Ago1 Hour Ago1 Hour AgoThe White House will propose boosting defense spending and slashing funding for longtime Republican targets like the Environmental Protection Agency in... 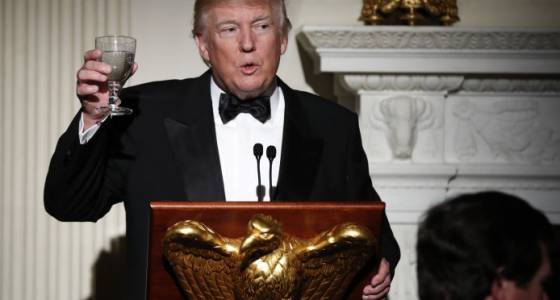 The latest news and developments to help you get ready for the day ahead.

The White House will propose boosting defense spending and slashing funding for longtime Republican targets like the Environmental Protection Agency in a set of marching orders to agencies as it prepares its budget for the upcoming fiscal year. President Donald Trump's proposal for the 2018 budget year, which will be sent to agencies Monday, won't make significant changes to Social Security or Medicare, according to an administration official.

Steve Harvey. Hanging chads. Dewey vs. Truman. While so many watched in shock as Warren Beatty and Faye Dunaway mistakenly announced La La Land as the Best Picture winner at the Academy Awards — only to realize they read the wrong envelope and Moonlight actually got the prize — Twitter exploded with all sorts of funny reaction.

Japanese auto parts maker Takata Corp. is expected to plead guilty in U.S. District Court in Detroit on Monday, Feb. 27, 2017, to a criminal charge and agree to a $1 billion penalty for concealing a deadly air bag inflator problem.

Japanese auto parts maker Takata Corp. is expected to plead guilty to a criminal charge and agree to a $1 billion penalty for concealing a deadly air bag inflator problem. Company representatives are scheduled to be in U.S. District Court in Detroit on Monday at 1:30 p.m. The company agreed last month to plead guilty to one count of wire fraud.

A new survey of children ages 13 to 17 conducted by The Associated Press-NORC Center for Public Affairs Research with the permission of their parents finds that America's teens are almost as politically disillusioned and pessimistic about the nation's divisions as their parents. The difference? They aren't quite as quick to write off the future.

A dump truck overturned on southbound U.S. 19 at County Line Road in Spring Hill early Monday morning, spilling sand across the roadway and prompting lane closures, according to the Florida Highway Patrol.

Gov. Rick Scott faces term limits and cannot seek re-election, but that isn't stopping the biggest special interest groups from continuing to load up his political action committee with huge checks. A private prison operator, a sugar industry giant and a Clearwater real estate management company with ties to a major Florida insurance company, are among those who have given Scott's Let's Get to Work committee at least $100,000 during the first two months of 2017 and at least $250,000 each since the start of 2015.

Sen. Marco Rubio over the weekend continued to defend his decision not to hold a town hall, saying they don't result in productive engagement, Alex Leary writes. "They are designed to basically heckle and scream at me in front of cameras," he said on CBS4.

There's just something about salty starches and luxurious baked goods that have a way of bypassing our rational thoughts and going straight to the emotional centers of our bodies in need of nourishment, Michelle Stark writes. That definitely comes into play in this recipe.

Meet the four winners named recipients of the 2017 Barnes Scholarship, an annual award sponsored by the Tampa Bay Times Fund named after Andrew Barnes, the former chairman and CEO of the newspaper's parent company, Times Publishing Co. The award, granted to high school seniors who have overcome significant adversity and achieved excellence, is worth up to $60,000 to pay for four years at an accredited college or university.