From the stands, the soccer match might have looked a bit odd. The coach was singing most of the directions and applauding players for being good listeners.But the goal wasn't scoring — it was learning the basics of the sport and thinking positively about... 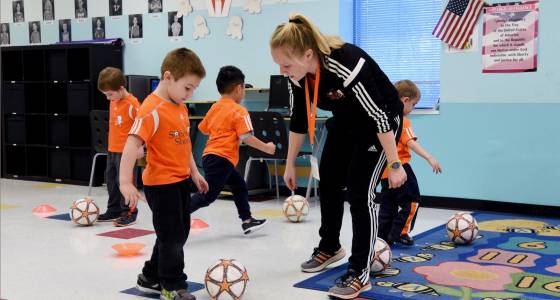 From the stands, the soccer match might have looked a bit odd. The coach was singing most of the directions and applauding players for being good listeners.

But the goal wasn't scoring — it was learning the basics of the sport and thinking positively about themselves and others, and the 12 preschoolers at Celebree in Perry Hall were all in.

"It's about having fun, not necessarily producing the next [Cristiano] Ronaldo," said Camilo Beltran, a regional executive director for Soccer Shots, a Harrisburg, Pa.-based soccer organization that offers weekly classes for youngsters at preschools, parks and in other spaces.

Ethan Schultz, 5, receives instruction from Coach Megan Kowalewski, a program coordinator with Soccer Shots, as she works with a preschool class at Celebree Learning Center in Perry Hall.

Ethan Schultz, 5, receives instruction from Coach Megan Kowalewski, a program coordinator with Soccer Shots, as she works with a preschool class at Celebree Learning Center in Perry Hall.

Pediatricians and sports medicine experts agree with Beltran's message. At age 3, 4 or 5, children aren't mentally or physically ready for competition, and rigid rules can turn young kids off sports.

With the wealth of exercise options available for young children, parents must weigh these sorts of developmental factors, along with cost and time commitment, when choosing activities for their kids. Pediatricians' recommendations vary based on the family's interests and goals, but the consensus is clear: Organized sports for tots should focus on the fundamentals, helping them build confidence, coordination and good feelings about exercise.

Dr. Natasha Burgert, a Kansas City pediatrician and a spokeswoman for the American Academy of Pediatrics, said parents usually begin asking her about sports when their children turn 3.

As the father of three sports-loving children and president of the Elkridge Youth Organization, which operates a wide variety of sports programs, Chris Jakubek knows a thing or two about young people and sports.

One of the things he knows is that it’s better for a young person not to play the same...

As the father of three sports-loving children and president of the Elkridge Youth Organization, which operates a wide variety of sports programs, Chris Jakubek knows a thing or two about young people and sports.

One of the things he knows is that it’s better for a young person not to play the same...

"Most day cares more than fulfill the exercise requirements," she said. "After that, at that age, the kind of activity is family preference."

She said parents should make sure the activity gets children moving and is enjoyable, and they shouldn't worry about college scholarships or a professional career. There is no competitive advantage to entering sports early, and young children can develop negative feelings toward sports if pushed too hard too early, she said.

Further, she stressed it was unnecessary to pay for organized activities. Some families have little time or money for classes, or parents would prefer to be involved in the activity. She said they can schedule a regular time to go to the park and toss a ball or run an obstacle course without fear they are putting their children at a competitive disadvantage down the road.

The Society of Health and Physical Educators, also known as SHAPE America, has some rules of thumb for activity, which include at least an hour of structured physical activity and an hour to several hours of unstructured activity daily for preschoolers. They should not be sedentary for more than 60 minutes at a time, except when sleeping.

The group does not recommend specific activities, but defines a structured activity as involving simple instructions, like setting up some equipment or following direction to run or chase. Inside activities could involve dancing or jumping. The group has a full set of guidelines for infants, toddlers and preschoolers online.

Six-year-old Elliott Crandell, afirst-grader at Federal Hill Preparatory School in South Baltimore, has beengetting his share of exercise "since he was old enough to register"for sports at 3 years old, said his mother, Tina Crandell.

Crandell said the activity is a good physical release after being in class and he gets to be with his friends. Most of all, she said, she likes Soccer Shots' emphasis on teamwork.

"This is a valuable skill — more so than his actual physical skill at soccer, or any sport," she said.

And with the blessing of the family doctor, Crandell said, she expects to enroll her 3-year-old daughter next year in soccer, in addition to swimming and ballet.

Soccer Shots coaches generally played soccer in college or even professionally, but their most important skills are their abilities with children, not their game stats, Beltran said.

Many of the classes are offered during the day at schools, to keep from piling on activities at night or weekends and to accommodate working parents.

While other kids played Minecraft and watched Nickelodeon, 13-year-old Travis Leatherwood, a Catonsville Middle School student, spent Saturday morning learning how to use the leg press and the elliptical machine.

Five-year-old Taryn Clever was in another gym, smiling while doing sprints and burpees,...

While other kids played Minecraft and watched Nickelodeon, 13-year-old Travis Leatherwood, a Catonsville Middle School student, spent Saturday morning learning how to use the leg press and the elliptical machine.

Five-year-old Taryn Clever was in another gym, smiling while doing sprints and burpees,...

He said the program is aligned with early-learning standards for the specific age group, helping children develop their gross motor skills and coordination over a half-hour or so of play. Warm-ups might involve stretching, and then class moves on to work on passing or shooting.

The children practice balancing with one foot on a ball and each gets the chance to score, but most of the class time is spent following simple instructions to run, practice a dribbling drill called "zig zag" or just cheer. They learn a word each class; on a recent day the word was "honesty."

Megan Kowalewski, a program coordinator who coaches at Celebree, said she's played soccer her entire life, and learned a lot about teamwork and commitment. But Kowalewski, who also has a background in early-childhood education, said for such youngsters, it's all about "positivity," whether that's feelings about themselves, their teammates or the sport itself.

Cem Catbas at Baltimore Ballet agrees the goal for preschool exercise classes should be providing a fun atmosphere to get moving. For that, he relies on teachers with the right temperament and abilities with children.

If his youngest students go on to develop a specific joy in dance and continue on through the years, that would be good, too, he said. But even if they don't continue in dance, he believes they will have developed coordination and confidence useful in other pursuits.

"It's not about a perfect plie at that age," said Catbas, adding that more discipline and class time are added as the children grow. "We call it creative movement. There is no one stomping a foot and being strict with them."

Dr. Lindsay Jones, a pediatrician trained in sports medicine, said children can continue in a specific sport as long as they enjoy it.

Exposing young children to a variety of activities is best so they learn different skills, develop positive associations generally with physical activity and decide what they like. But, she said, don't sign them up for too many classes at once: Preschoolers should be enrolled in no more than one or two extracurricular sports per week, leaving time for other activities such as music, art and family time, said Jones, a leader of the MedStar Pediatric and Adolescent Sports Medicine Program.

The children will have time to choose — and master — a specific sport later, she said.

Jones also said that if it's not fun for the children, or if it's a burden on parents, it's OK to stop going or try something new. Many instructors will allow a trial session before committing to months of classes. Parents can even check out a class ahead of time to ensure it's a good fit and not too taxing for anyone in the family.

"The focus should be on having fun, instead of true games or competition," she said. "The focus can be different when they're 6 or 7, but for now, stick to basics. Focus on positive experiences. It doesn't matter which endeavor you choose."