OROVILLE — Crews worked Tuesday to clean up dirt and debris from the base of Oroville Dam and biologists rush to save stranded fish after state officials shut off the flow of water from a damaged spillway at the Northern California lake.Officials brought... 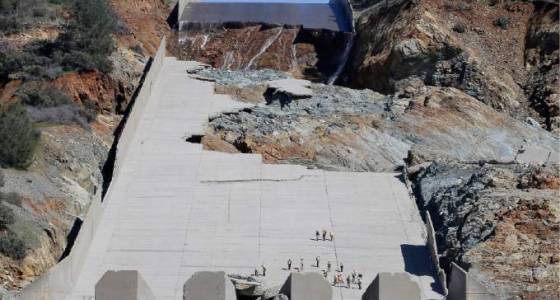 OROVILLE — Crews worked Tuesday to clean up dirt and debris from the base of Oroville Dam and biologists rush to save stranded fish after state officials shut off the flow of water from a damaged spillway at the Northern California lake.

Officials brought in extra heavy equipment to remove sediment, concrete and debris that washed down the eroded hillside and collected at the bottom. The erosion forced authorities to order nearly 200,000 people to evacuate three weeks ago when experts feared it would undermine a concrete wall holding water in the lake and unleash a 30-foot wall of water.

Water officials announced Monday that they were closing the floodgates at the top of the spillway, stopping the release of water from Lake Oroville for the first time in three weeks and showing that much of the concrete spillway is now gone. It's been replaced by a deep gash in the earth on both sides.

The decision to shut off water releases gives crews time to remove the debris, which is preventing the use of a hydroelectric power plant at the base of the dam. But it's severely curtailed the flow of water downstream on the Feather River, leaving fish stranded in pools of water separated from the main river channel.

The Golden Gate Salmon Association, a fishing group, called on state officials to consider the needs of fish now that they've alleviated the immediate flood risk to Oroville and nearby communities.

"Protecting public safety in response to the failure of the Oroville spillway is absolutely critical," Mike Aughney, a board member for the group, said in a statement. "But California's salmon and salmon fishermen are also being harmed by this crisis."

The baby fish now making their way to sea will become the stock available for harvest in 2019 and 2020, the group said.

State biologists scrambled Tuesday to collect stranded fish and move them back to the river before they're eaten by birds, the water evaporates or it warms to lethal levels.

"Every day that goes by, the chances of losing fish are higher so we're doing literally everything that we can do to get these fish out of these isolated pockets of water and back into the Feather River," said Andrew Hughan, a spokesman for the California Department of Fish and Wildlife.

The water level has risen more than three feet since crews stopped flows out of Lake Oroville. The lake still has room for 60 feet of water, with no imminent rain in the forecast.

State lawmakers postponed a Senate hearing scheduled for Tuesday so water officials could focus on their work at the lake. A new date hasn't been selected.