CLEVELAND, Ohio -- At noon, the Maslenitsa celebration begins and the line for blinis snakes out the door of the Rockefeller Park Greenhouse. Hundreds of Russians, friends, and fans of the Greenhouse are at the pre-Lenten event to help push winter out the... 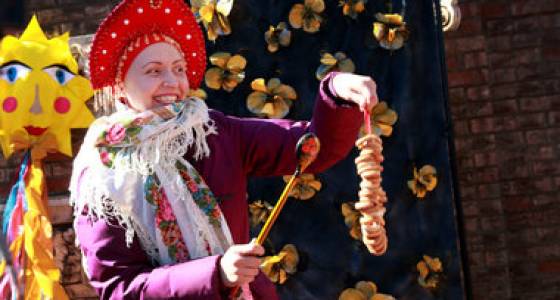 CLEVELAND, Ohio -- At noon, the Maslenitsa celebration begins and the line for blinis snakes out the door of the Rockefeller Park Greenhouse. Hundreds of Russians, friends, and fans of the Greenhouse are at the pre-Lenten event to help push winter out the door.

The makeshift kitchen in the meeting room is filled with chafing dishes that are bulging with the delicate crepes that are traditional Maslenitsa fare. Olga Kankova, wearing a nesting doll apron, tries to help the unfamiliar negotiate her native delicacies. "What is this?" a visitor asks, pointing at a line of cups full of small orange orbs.

"Do you like fish?" she asks the woman. "If you don't like fish, you won't like it." She takes a wooden spoon and scoops out a taste of caviar. The woman puts it in her mouth and frowns. "I don't like it," she says.

Kankova explains that they don't usually eat caviar alone, that they put it with something sweet in a blin or with sour cream or cheese. The woman shakes her head. "It is very good quality, some people just don't like," Kankova laughs, and ladles some cooked apples onto the woman's blini.

Another woman asks about sbiten, a hot Russian drink. "Is it tea?" the woman asks. Kankova splashes a bit of the purplish liquid into a cup for her to taste. She hands it across the table. "It is a cup of Russian magic," she says of the ancient brewed recipe, made from honey, spices and juices.

"That's good," the woman says, and Kankova pours her a cupful. She sees a woman smearing a blin with a commercial hazelnut spread. "Aah, we use sour cream, not Nutella," she says with fake horror.

Around the corner, Joe Cimperman, President of Global Cleveland and former city councilman, joins Ken Kovach, business advisor and choirmaster at St. Theodosius Cathedral, sit down at a table, ready to begin judging the 2017 blini contest. Kovach, dressed in a ceremonial uniform, grabs a few single-serving bottles of Stolichnaya vodka. "You know Slovenians don't drink vodka," Cimperman says. Kovach looks at him, feigning surprise. "We need it to cleanse our palates while we judge," Kovach says, raising his eyebrows. They screw the lids open and pour the clear liquid into clear plastic cups. Fellow judge Debbie Hanson of Clevelandpeople.com joins in. They clink cups, and Cimperman asks, "How do you say "cheers" in Russian?"

"Na Zdrovie," Kovach says, and all three repeat the word, take a sip, and pull plates full of the folded golden crepes toward them. They judge the plain blini on taste and texture. Some are more salty, some more sweet. Maso, or Maslenitsa, is the Russian word for butter, and there is plenty of it in the blini. Eventually the judges decide on the winner, Feodosiya Fisher of South Euclid.

Maslenitza is celebrated the last week before the Lenten season begins. It is part of an 'easing in' to the austerity and fasting of the season. During this week, Russians eat mostly dairy -- butter, cheese, sour cream, yoghurt, all good fillings for the delicious crepes. People at Maslenitza festivals here and around the world revel in worldly delights: music, dancing, games and good food, before abstaining from all of that to concentrate on spiritual matters. Lent begins March 1st, on Ash Wednesday.