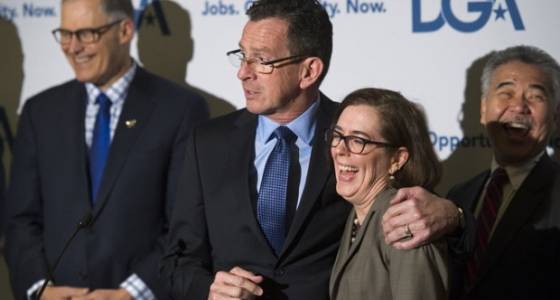 Walden told The Oregonian/OregonLive through his chief of staff that his meeting with Brown was "friendly and frank" and touched on Oregon's transportation, infrastructure, rural economic development, forestry, and health care policies.

Walden is singularly important to Congressional Republicans' effort -- and President Trump's campaign promise -- to repeal and replace the Affordable Care Act because he is chairman of the House committee which oversees U.S. health care policy. Walden has criticized the health care law, commonly referred to as Obamacare, and vowed to replace it with something better.

According to her press secretary, Brown, a Democrat, told Walden that she is "open to any solution" for giving better health care to Oregonians, but "is not willing to go backwards."

"Governor Brown also told Representative Walden that it is unfair to pull the rug out from under Oregonians whose lives have been changed by access to comprehensive health care in exchange for tax breaks to millionaires," spokesman Chris Pair said.

Brown echoed that statement nearly word-for-word Monday morning in an appearance on MSNBC with other Democratic governors to talk about health care policy: "We particularly don't want to cut back on who gets coverage to give a tax break to millionaires," she said.

Proposals floated by Congressional Republicans to offer age-based instead of income-based tax credits for health care spending have been cast by critics as a tax break for the rich.

Brown's get-together with Walden came at the tail end of her trip to the nation's capital for the annual National Governors Association conference. It also coincided with the governor's unveiling of a new website, 95PercentOregon.com, which shows how a repeal of the Affordable Care Act would affect Oregonians. The glossy site particularly highlights how a repeal would harm the state's rural areas, where a greater share of people rely on taxpayer-subsidized health care.