How to capture a runaway NY bull? Bring in the cowboys

CaptionCloseNEW YORK (AP) — Is there a cowboy in the house?They could use one in New York City, where cattle have escaped from urban slaughterhouses three times in the past 13 months on wild runs through the streets.One fugitive bull led a posse of... 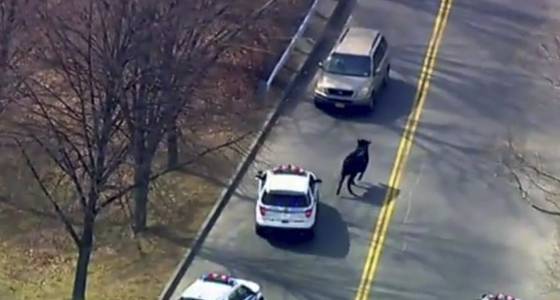 NEW YORK (AP) — Is there a cowboy in the house?

They could use one in New York City, where cattle have escaped from urban slaughterhouses three times in the past 13 months on wild runs through the streets.

One fugitive bull led a posse of flustered, arm-waving cops Tuesday on a chase through Queens that was televised live from hovering news helicopters. Police ultimately cornered the bull in someone's backyard, but the animal, hit by multiple tranquilizer darts, died shortly thereafter.

Real bull-wrangling experts say the officers can be commended for trying their best, but there's definitely a better way, if you've got someone on hand who knows how to twirl a lariat.

They say stick with a rope, try approaching by horse or on foot and skip the tranquilizer guns, or at least fire fewer shots.

"You load a horse on a trailer and you go find the bull and rope the bull and put it in the trailer," says Parke Greeson, a cowboy from a cattle ranch in Lubbock, Texas. "It's just like getting dressed and putting your shoes on. You just do it."

Without tranquilizers, he added.

Greeson, 25, speaks from experience. He and a cowboy buddy once rushed to the rescue with lassoes when a pair of cows got loose on a Texas highway.

They roped one from the back of a pickup truck. They nabbed the second one on horseback in Lubbock's business district, where the bovine had caused pandemonium and jumped through an office window.

Unfortunately, there were no cowboys on hand this week to help New York City police capture a lively black bull that ran amok after breaking out of a halal slaughterhouse in Queens' Jamaica neighborhood.

For much of the chase, officers tried unsuccessfully to maneuver their vehicles to box in the bovine. Tranquilizer darts appeared to have little effect — until the end.

"The officers were trying to do what they're supposed to do — protect people, not cattle — but they did a lot of things wrong," said Susie Coston, director of the Farm Sanctuary in upstate New York, which works with the city to adopt runaway or homeless animals.

For one thing, she said, the officers could have backed off for a bit to let the sedatives take effect.

"They chased the bull while firing one dart after another, so the animal's adrenaline shoots up and there's no chance for the tranquilizer to work and calm him down," she said.

Lt. John Grimpel, an NYPD spokesman, said that while the department's Emergency Service Unit "is highly trained in the use of tranquilizer guns," that does not include a specific protocol for firing tranquilizer darts to contain large animals.

Julia Gray, a veterinarian who works with cattle in upstate Trumansburg, New York, said that to deal with a bull on the loose, "you need someone who's really equipped to handle an animal this size, someone who can rope a cow and tie it up — like a cowboy on a horse."

That's what happened earlier this month in Weatherford, Texas. Police had been unsuccessfully chasing an escaped Charolais bull for two hours in patrol vehicles when a man appeared on a galloping horse, twirling the lasso above his head and quickly roping the animal.

The NYPD is unlikely to add lasso classes to the curriculum at the police academy, but, for the record, its track record in capturing large animals isn't all that bad.

Back in 2003, an officer rappelled down the side of a high-rise building and fired a tranquilizer dart to subdue a huge Bengal tiger a tenant had been keeping in his apartment.

And a cow and a steer who escaped from slaughterhouses in the same Queens neighborhood last year were also successfully roped. Both are now living in sanctuaries.