Gramercy Park is full of crap.This past week, the exclusive neighborhood — home to Jimmy Fallon and Julia Roberts — was abuzz about angry, anonymous signs posted outside of the members-only park.“Your dog makes the biggest poops. We know because we’ve... 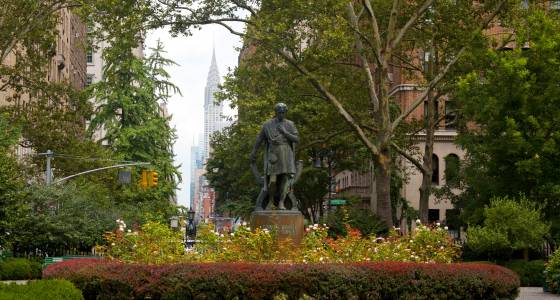 Gramercy Park is full of crap.

This past week, the exclusive neighborhood — home to Jimmy Fallon and Julia Roberts — was abuzz about angry, anonymous signs posted outside of the members-only park.

“Your dog makes the biggest poops. We know because we’ve stepped in it.”

“If your dog has the runs, run him to the curb and clean it up!”

They’re the handiwork of a group of neighbors who can’t take the mess anymore.

“The situation has gotten out of hand,” said Pam Vassil, one of the vigilantes. “It hasn’t been this bad since the [Mayor Ed] Koch days” — when the city was awash in filth and crime.

She and four friends, who asked to remain anonymous, “were really agitated” by the increasing piles of dog poop left on local sidewalks. The signs are just step 1 in their plan to wipe the party poopers off the street.

“I’m dying to catch someone in the act,” added Vassil, a retired art director and Gramercy resident of 45 years who walks around the park with her Husky mix Pumpkin. “We think there are about five offenders and we’d like to nail them all.”

Neighbors are supportive of the campaign.

“It’s literally like land mines,” said Michele Chalupka, an area dog walker who insists it must be a pet owner — not a professional walker — who’s crapping up the neighborhood. “I love the signs. I wanted to put them up months ago.”

Alicia Kubersky, who lives on the park with dogs Princess and Ace, thinks there are multiple dung degenerates. “It’s not just one dog — it’s all different s – – ts. It’s surprising because it’s so expensive here and people are so lax about [cleaning up after their dogs].” The median sales price for a home in the neighborhood is $1.335 million, according to Trulia.com.

Vassil and pals have put up signs before, in 2012, when things got gross. “The last time we did this, it got much better,” she said.

This time, the team spent days hashing out the best epithets to shame the offenders. “We were going to do it Sunday night,” said Vassil, but they waited until Monday as they figured too many people would still be away for the holiday weekend. “We wanted maximum viewing.”

Vasil added that she considered organizing an overnight patrol, as the poop perpetrators seem to do their business under cover of darkness. “But I’m not that deranged. I can’t make my life about poop. Like the sign said, ‘You can run, but you can’t hide.’ Eventually you’ll get found out.”