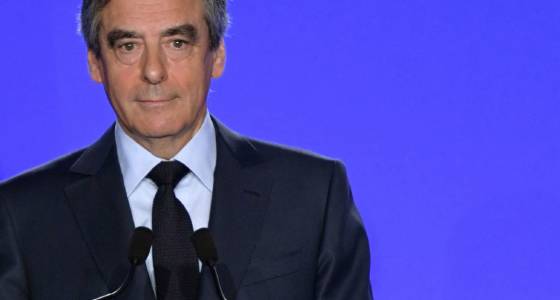 “I will not yield. I will not surrender. I will not withdraw,” Fillon said in a news conference after abruptly canceling a campaign appearance.

Fillon, 62, had presented himself to the French public as a caretaker of traditional Catholic conservatism in a country struggling with issues of identity and culture following a historic influx of mostly Muslim migrants and a string of terrorist attacks that have claimed the lives of 230 since 2015.

But Fillon’s political fortunes crumbled in a spectacular public fashion following the accusation last month—first published in Le Canard Enchaîné, a French satirical newspaper—that his wife Penelope and two of his children had been paid approximately $1.3 million in government funds for work they never actually did.

Although nepotism is common in the French political establishment, the allegations of a do-nothing salary had extra teeth. Last week, French prosecutors launched an investigation into the claims of “misuse of public funds.”

As the Wales-born Penelope Fillon had said of her professional relationship with her husband in 2007: “I was never his assistant.”

Fillon has fiercely rejected the accusations of any wrongdoing, accusing his opponents and the French media of orchestrating a “political assassination.” His approval ratings had plummeted, but his stubborn refusal to budge enabled him to make a slight comeback in recent weeks.

The announcement of the formal investigation led to widespread speculation that Fillon would finally be forced to drop out. But he stood his ground on Wednesday.

“I will be at the rendezvous that democracy—and it alone—gives us to choose our collective future,” he said, referring to next month’s election.

In any case, the accusations have grossly undermined the moral authority of a candidate who had promised fiscal responsibility, the slashing of unnecessary public spending and the elimination of as many as 500,000 public sector jobs.

The scandal has hit Fillon where it hurts: among the predominately rural, agricultural voters who had supported him in the first place. According to the latest study conducted by the Cevipof research centre for France’s Le Monde newspaper, support among these voters for the centre-right party—their traditional choice—has plummeted by over 50 per cent between 2012 and 2017.

Many of these votes could now be siphoned off by the National Front, the far-right populist party headed by Marine Le Pen. According to the Cevipof study, 35 per cent of voters polled said they would back Le Pen in the first round of the vote in late April; only 20 per cent said they would support Fillon.

The dwindling popularity of Fillon—who had once been seen as a shoo-in to victory—adds another dimension of upheaval to an election many see as a major turning point in an increasingly fragile European Union.

With Fillon apparently in decline, the top choices are either Le Pen or the centrist candidate Emmanuel Macron, a former economy minister under France’s current president, François Hollande.

Macron has galvanized support among Parisian elites and young people across France, but his vague policy views often alienate voters on both the left and the right.

Le Pen—the daughter of Jean-Marie Le Pen, a convicted Holocaust denier who founded the National Front in the mid-1970s—sees herself as the third chapter in a global populist upheaval that began with the Brexit vote last June and continued onto the election of U.S. President Donald Trump in November. She is expected to qualify for the second and final round of the vote, to be held in early May.

Fillon, who handily won the conservative primaries in November to become the presidential candidate of Les Republicains, France’s centre right-wing party, previously served as the country’s prime minster between 2007 and 2012, during the presidency of Nicolas Sarkozy.