Foxx agrees to release of inmates unable to post bonds of up to $1,000 cash

In another sign of growing political momentum for bail reform, Cook County prosecutors will no longer oppose the release of some detainees held on nonviolent offenses simply because they cannot afford to pay cash bonds of up to $1,000 at a time.The change... 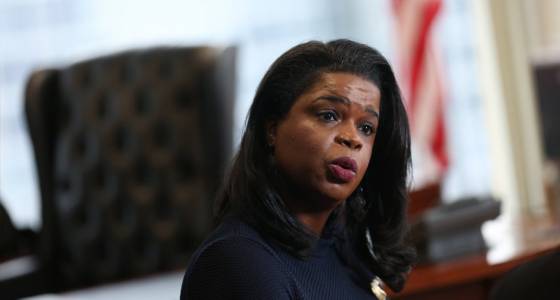 In another sign of growing political momentum for bail reform, Cook County prosecutors will no longer oppose the release of some detainees held on nonviolent offenses simply because they cannot afford to pay cash bonds of up to $1,000 at a time.

The change was announced Wednesday by State's Attorney Kim Foxx, who has been in office for three months. It was quickly praised by a top aide to Sheriff Tom Dart, who has focused on the issue over the last two years as part of an effort to reduce the county jail's population.

"For the first time we have a state's attorney taking a powerful stand on bail," said Cara Smith, the sheriff's policy chief. "I think that's what's really significant here."

While the immediate impact of the decision will be minimal — affecting just a few dozen of the more than 7,400 inmates now in the jail — Foxx and other county officials said it will make the criminal justice system fairer and more cost-effective.

The expense for taxpayers has been significant — a year's stay in the jail for an inmate is estimated to cost about $60,000, more if serious mental or health problems are at stake, according to a county study.

Foxx said she believes there's "a consensus" that "something (is) out of whack" when some inmates facing violent charges can bond out if they have the cash while indigent defendants charged with nonviolent offenses languish in jail despite bonds sometimes of only a few hundred dollars.

The cash-bail system has increasingly come under fire nationally and in Chicago as discriminatory, stranding largely poor, minority defendants for months as they await trial for often relatively minor offenses. It was designed to ensure that defendants don't flee or harm others before trial, but critics say judges, in deciding on the amount of the cash bail, don't always know crucial details.

Smith, along with top deputies and other staffers from Foxx and Public Defender Amy Campanelli's office, have already identified several dozen detainees who appear to qualify for I-bonds under the new policy, Foxx said in an interview.

The offices are also working together on a set of guidelines so prosecutors are clear when they can agree not to seek cash bond at the initial bond hearing in felony and misdemeanor cases, county officials said. Those changes could have "significant" impact on the jail population, Smith said.

Some 250 to 300 people are jailed every day on average because they can't post $1,000 cash or less, according to the sheriff's office.

County officials are backed in their efforts by Cook County Board President Toni Preckwinkle, who has made bail bond reform one of her top issues. State Rep. Christian Mitchell, D-Chicago, a Preckwinkle ally, introduced legislation last month calling for the end of the cash-bail system, four months after Dart publicly called for abolishing the practice.

Chief Judge Tim Evans has also expressed his preference for replacing the cash-bail system, telling county commissioners at a board meeting last year he would scrap it if he had his way.

Meanwhile, Foxx said prosecutors will agree that the several dozen detainees — many of them jailed on drug or retail theft charges — can be released without posting any cash. But they will ask that a judge — the only one who sets and can change bail — require the defendants to participate in drug or mental health treatment.

"This is a population who are disproportionately poor and also have some other underlying condition whether it's a drug addiction or mental illness," Foxx told the Tribune. "So we're asking ... that they actually go someplace to deal with those underlying conditions."

Foxx and other county officials acknowledged there is only so much capacity in those programs or even for release on electronic monitoring. But Campanelli said putting pressure to increase funding for those programs over jail beds is part of the point.

"We need to force the issue," said Campanelli, who supports replacing the county's cash-bail system with one that decides to hold people if they're deemed to be a danger to others or a risk to flee.

"I am trying to make a 180-degree turn," she said. "For the last 30 years, it's sort of been this idea in Cook County that we should operate on the premise that everybody should be locked up and we let a few out.

"But everybody has a right to bail. Right now we're trying to tweak the system, but we need to start at ground zero."

Days later, the Illinois Supreme Court quietly announced it would work with a national nonprofit over the next four years to launch pretrial screening programs — such as ones already underway in Cook County and a third of the state's 24 judicial circuits — throughout the state to help judges determine which defendants can safely be released while awaiting trial.

County and jail officials say the use of pretrial screening and the expanded use of electronic monitoring have helped drop the population at Cook County Jail to about 7,400 after swelling to more than 10,000 as recently as four years ago.

Preckwinkle has said she believes further bond court reforms could bring the jail's population down to about 6,000.