For four years, a sidewalk on Deerpath Rd. has been waiting for repairs: The Fixer | Toronto Star

Four years and counting is far too long to replace a section of sidewalk that was damaged during new home construction.We recently got a note from a reader who said we might recall her husband, Arnold Buchanan, the proprietor of Kew Beach Auto, down a narrow... 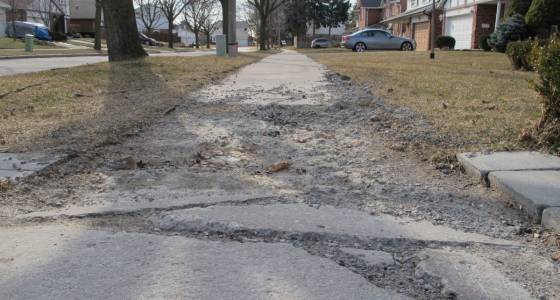 Four years and counting is far too long to replace a section of sidewalk that was damaged during new home construction.

We recently got a note from a reader who said we might recall her husband, Arnold Buchanan, the proprietor of Kew Beach Auto, down a narrow alley at 1911 Queen St. E. until he closed it and retired 17 years ago.

Those who remember Arnold know he was a master of the auto universe, providing cheap, reliable repairs, as long as you didn’t need hand-holding or long explanations; he was a man of few words.

Sandra Buchanan was looking for help with a repair that is beyond Arnold’s orbit, a crumbling section of sidewalk on Deerpath Rd., near Victoria Park Ave. and Ellesmere Rd.

“Arnie said you might be able to ‘light a fire’ under (the city) to get this sidewalk repaired,” she said, adding it was damaged at least four years ago, during construction of a new home.

“Our neighbourhood has many seniors, and some need to walk with care and use walkers or canes. The sidewalk is so damaged that it forces them to walk on the road or cross over to the south side of our street.

“Several neighbours have contacted 311 and even last year, the city repaired the sidewalks on our street, but did not” fix the damaged sidewalk in front of 14 Deerpath Rd., she said.

We went there and found a section of sidewalk missing, with nothing but a mix of mud and gravel where there should be smooth concrete. The sidewalk in front of the driveway at 14 Deerpath Rd. is also badly cracked and in need of replacement.

While we were there, a woman pulled into the driveway of the home and confirmed that the damage occurred when it was built about four years ago, adding that she has also asked the city more than once to fix it.

At one point, she said she was told they’d have to pay to have it replaced, and that they are willing to fork over the dough. But so far, nobody has showed up to fix it or collect the money.

Status: We’ve asked Norberto Santos, manager of road operations in North York, if he can arrange to have it temporarily filled with asphalt and prioritize permanent repairs.

What’s broken in your neighbourhood? Wherever you are in Greater Toronto, we want to know. Send an email to jlakey@thestar.ca . Report problems and follow us on Twitter @TOStarFixer.

What’s broken in your neighbourhood? Wherever you are in Greater Toronto, we want to know. Send an email to jlakey@thestar.ca . Report problems and follow us on Twitter @TOStarFixer.