MORRISTOWN -- Authorities are warning town residents a picture of border patrol agents arresting someone in front of a local business is fake, and that the town has not intention of having police officers perform the work of Immigration and Customs Enforcement... 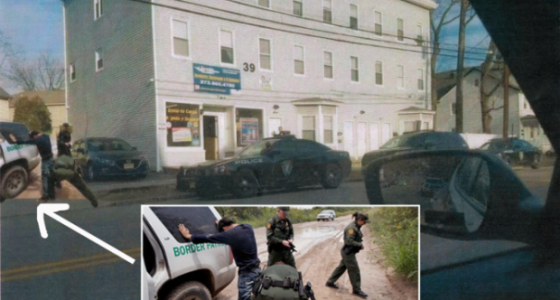 MORRISTOWN -- Authorities are warning town residents a picture of border patrol agents arresting someone in front of a local business is fake, and that the town has not intention of having police officers perform the work of Immigration and Customs Enforcement agents.

"It's clearly a scare tactic and it's being superimposed in front of Latino businesses," Mayor Timothy Dougherty said. "We are not engaged with ICE and (residents) have nothing to fear."

Dougherty said members of the local Latino community showed him this image on Sunday and police quickly determined it was a digitally altered.

"There's no way to trace it, but we're just trying to get the word out that this is fake and (residents) should be aware it's fake," he said.

Dougherty said hoaxes such as this and the recent anti-immigrant rhetoric across the nation have many in the community on edge. Some have been afraid to send their children to school or to visit local Latino businesses due to fears of deportation, he said.

He said town officials don't want residents to be afraid to call police if there's an issue, adding that Morristown has no intention of participating in the ICE 287(g) program.

The federal program provides for the Department of Homeland Security to train local police officers to perform the work of immigration agents.

According to the 2010 Census, about one-third of the population of Morristown is Hispanic.

The town in a statement on Tuesday said "Morristown has persistently shown support for all members of the community and will continue to implement fair and welcoming policies in order to assure its residents that actions such as the one depicted in the circulated image, do not reflect the values of Morristown."

Dougherty saidd he's also heard of scams in other towns in which people take advantage of immigrants by knocking on their doors claiming to be ICE agents in order to extort money from them.

"There's a fear factor out there," he said. "It gets to be a rumor mill and they get nervous and get scared."