Donald Trump should be my plebe

I've been an English professor at the U.S. Naval Academy in Annapolis for 30 years. An education within such a service academy (the others are Army, Air Force and Coast Guard) immerses students for four years in an atmosphere heavy with an insistence on... 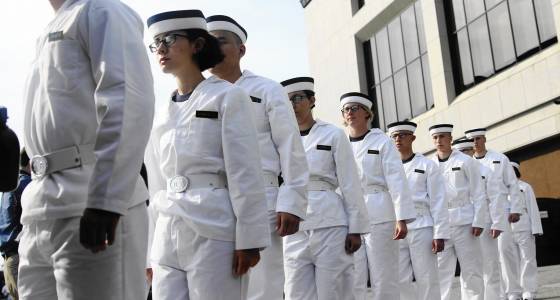 I've been an English professor at the U.S. Naval Academy in Annapolis for 30 years. An education within such a service academy (the others are Army, Air Force and Coast Guard) immerses students for four years in an atmosphere heavy with an insistence on leadership. Currently my students' commander-in-chief is a man whose qualities as a leader are the exact opposite of what I believe we are trying to teach. Certainly he lacks the skills that English class can help students achieve. Thus my modest proposal is that we should waive our age limits on entering students and have the commander-in-chief enroll at Annapolis as a plebe, a freshman. And I'd like to request that he be assigned to one of my classes.

In the required plebe leadership class, for example, he'd learn about what is called "servant leadership," which emphasizes that the purpose of the leader is to empower the followers, not the leader. He'd learn that a leader is above personal grudges, and does not seek to pit factions against each other. He'd also be subjected to a dizzying array of briefs on sexual assault, and on preventing even a situation where it might appear to have happened. None of this knowledge is evident in his actions to date.

If I got him in class, we'd talk about what I call the one-two process. "One" is knowing what your point is and being able to express it clearly. But the difficult part is immediately being able to follow this with "two," which is the justification for why you hold "one," the view you do. What you don't do is what President Trump seems to do, namely shoot from the hip using only his personal whims and convictions as justification.

And we'd talk about incorrect word usage, which would be marked with the letter "D" on his papers, to stand for "diction." Unlike many journalists obsessed with Mr. Trump's angry tweet about a "so-called judge" or his accusations that reporters were "groveling," I wasn't outraged. I immediately identified this as what I am sure it was: a diction problem. I am sure from having corrected 30-years worth of bad papers that Mr. Trump thought "so-called judge" did not mean that he was questioning the legitimacy of the judge, but rather that the judge was of poor quality. And I am equally certain that Trump does not know that "to grovel" means to crawl subserviently; he was applying it to mean almost the opposite: aggressive insistence on the part of a reporter that he found unwelcome or continuing to talk to clarify of a point.

I would also add to the course of study, for the benefit of 4/C Trump and his other "fourth-class" classmates, lessons in presentational skills both with words and with body language, which students practice by presenting to the class. Don't say the word "like" as a filler, for example, which makes the person doing so sound unfocused and immature, or rely on other verbal tics such as "OK?" or "Believe ME!" Be clear and concise, not repetitive; say it once. And when it comes to body language: Keep your face still, don't put your hands above shoulder level, don't purse your lips. It makes the troops feel secure if you are in control of yourself.

Do we graduate officers who fail to learn any of these lessons? Many, which is why I have long believed that the service academies fall lamentably short of their education goals and should be re-evaluated or re-purposed. But at least we preach the right things, even if many students don't take it on board. For some of them, it sticks.

So please, let's give 4/C Trump a letter of admission. On Day One, he would be informed what a leader looks like physically and told that how he comports himself is of critical importance. We have weight standards here, enforced for all but football players and students the administration otherwise favors. Students have to pass a twice-yearly PRT — physical readiness test — involving a run and strength exercises. No unfit folks allowed. Looking sharp in your uniform is crucial. And dressing properly — that's enforced too — with punishments doled out for people whose uniforms are out of regulation or sloppy. No room here for people who don't know how long the tie is supposed to be.

Bruce Fleming is a professor at the U.S. Naval Academy; his email is fleming@usna.edu.