Chief Littlecrow Bagby actually looks forward to going to the doctor.  The 52-year-old didn't always feel that way. And he's seen a lot of doctors after having two heart attacks and two strokes. Many docs he encountered lacked a warm bedside manner,... 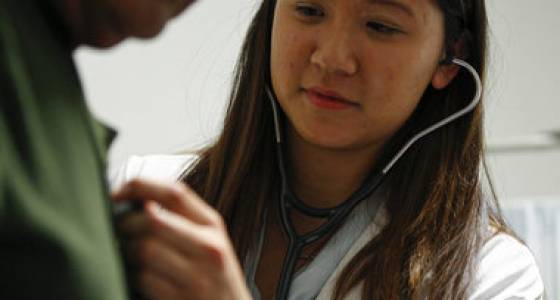 And he's seen a lot of doctors after having two heart attacks and two strokes. Many docs he encountered lacked a warm bedside manner, he said.

But the doctors and physicians assistants he encounters in the DeSales Free Clinic at the Allentown Rescue Mission are a different sort. They joke with him and listen to his concerns when he comes in for bi-weekly blood pressure checks and medicine refills.

When he sought treatment for a pinched nerve in his neck, he discovered the source of his chronic neck pain.

"I've come to find out I have arthritis," Bagby said.

The care he's received has been an unexpected upside to finding himself homeless following the condemnation of his Quakertown rental home in December. Friends in his church's purity group suggested he turn to the mission.

"It's a lifesaver to come here," Bagby said. "Guys are hurt and they come in and get taken such good care of. These people are afraid to go to the regular doctor because they are not personable. Here it is different."

The free DeSales University student-run clinic is celebrating its 10th anniversary operating at the Allentown Rescue Mission this year. The clinic provides shelter residents primary and acute care, lab services and medications, all for free.

Corinne Feldman had already graduated from PA school in Chicago, where she'd been required to spend time in a homeless shelter providing free medical care. They looked for similar opportunities in the Lehigh Valley, but didn't find anywhere providing primary care to the homeless.

"I saw at a very early stage in my education how many people were not sitting in our waiting rooms in our doctor's offices," Corinne Feldman said, adding it sparked a curiosity as to why those patients were uncomfortable. "Establishing clinics in homeless shelters removes that barrier of a sterile office because we come to their turf."

So, Brett Feldman approached the DeSales administration with their "crazy idea," said Corinne Feldman, who is now an associate professor in DeSales' physician assistant program.

And after a year of stops and starts, the clinic opened for its first evening at the Allentown Rescue Mission. A year-and-a-half ago, they expanded their work to the Truth Home for Women in Bethlehem, which helps women recovering from sexual exploitation.

The clinic at the mission now opens at 6 p.m. every Tuesday and Thursday.

"Patients are given individual attention," said Nancy Davidson, 23, a second-year student in the program. "We are here from six until the last patient is seen."

On Thursday, the clinic saw seven patients, a manageable number for the five students, supervising doctor and physician assistant, Corinne Feldman said. Two weeks ago, they saw 23 patients, who were all quite sick, in one evening.

"They are a huge blessing to us," said Hillary Spear, Allentown Rescue Mission director of operations.

Prior to the DeSales clinic, the mission only could send clients to the emergency room, she said.

Students take the lead at the clinic, getting hands-on experience working as physician assistants who can treat patients and prescribe medicine as long as they remain under the supervision of a doctor.

"The students are not there to shadow a provider," Corinne Feldman said.

All first and second-year DeSales physician assistant graduate students must work in the clinic, which is an unusual requirement, she said. They fundraise to help keep it afloat. It also has a $500,000 endowment from DeSales.

Only 85 U.S. medical schools have student-run clinics, a handful of which are in homeless shelters, and only four require it as a part of the curriculum, Corinne Feldman said.

"I think it makes a big difference in terms of the students we graduate because they are raised on this as part of their medical education," Corinne Feldman said. "It is humanizing a part of our society that is often dehumanized in so many ways."

Some are initially hesitant about working in the clinic. But it ends up being transformative for both patients, who get reliable care, and students, she said.

Delroy Osborne is one of those complex patients.

The 29-year-old lost his left leg from the knee down in a car accident 11 years ago in his native Saint Croix in the U.S. Virgin Islands. His left femur and hip are shattered, which he dreams of getting repaired.

"I would love to be able to walk again," Osborne said.

He recently sprained his right ankle, but he can't follow the conventional advice of staying off his foot to let it heal. He walks to and from the bus stop on crutches each day to get to his job in a telecommunications center in Bethlehem.

The swelling of his ankle on Thursday showed the purple ace bandage he got on his last clinic visit isn't cutting it. None of the braces the clinic has in-stock fit his size 15 feet, but providers plan to get him one.

Osborne arrived in the area about a month ago, driven out of New Jersey by the high cost of living.

"This is where the bus stopped, literally," Osborne said.

He's grateful for the care and shelter he receives at the mission. And he isn't frustrated that his ankle is taking long to heal.

"They are trying their best," Obsorne said. "It is a free clinic and they offer the best care they can."

Davidson questioned him about his long list of ailments with occasional Spanish translation help from volunteer Korrinne Yurick, 21, a Muhlenberg College senior, who will be enrolling in the DeSales PA program.

Despite a language barrier, Mendoza kept them laughing, cracking jokes about how he was an old car that was falling apart.

Davidson found working in the clinic so inspiring and humbling that she is headed to Tanzania next year to learn about the African nation's medical system, working alongside a doctor.

"This opened my eyes," she said. "I wasn't even aware of the prevalence of the homeless population in Allentown."

About 10,000 people find themselves homeless in the Lehigh Valley each year. The DeSales Free Clinic sees about 1,000 men each year, providing ongoing primary care and breaking the cycle of relying on emergency rooms for basic care.

On Tuesday and Thursday mornings, DeSales nursing students go to the rescue mission and check 'the guys' blood pressure. Those students often refer patients to the clinic at night.

"It really closes that loop of flagging something in a screening but not having an avenue to get that care," Corinne Feldman said.

If one of the men doesn't show up for the evening clinic, they will seek them out in the shelter and that can be quite meaningful for some of the men, she said.

"A lot of their interaction with our health care system has been pretty dismissive," Corinne Feldman said. "I think it tells them how much we do care about them. And that is an unusual feeling for many of these guys."

DeSales' program is unique because it really challenges students to think about the responsibility of a physician assistant to reach those who don't have health care, Davidson said.

"What really sticks with you is how grateful each patient is for what we are providing," she said. "Some want to pray with you and say God bless after."