Clementine in Hamilton has gone back to its comfort-food roots. The restaurant, which closed in 2015 because of financial difficulties and the owners' desire for a lifestyle change, came back on the scene in December with a scaled-back menu and renewed determination.We... 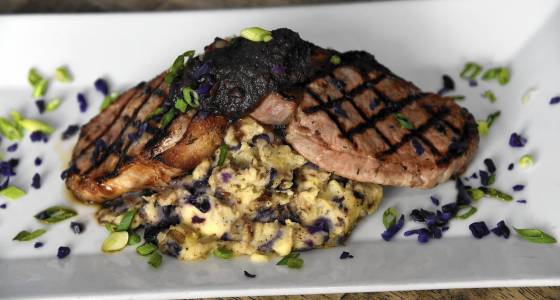 Clementine in Hamilton has gone back to its comfort-food roots. The restaurant, which closed in 2015 because of financial difficulties and the owners' desire for a lifestyle change, came back on the scene in December with a scaled-back menu and renewed determination.

We were glad to see the return of the locavore restaurant. It first opened in 2008 in a modest space on Harford Road and expanded in 2009. Its shuttering caught many by surprise.

Owner-chef Winston Blick and his wife and co-owner, Cristin Dadant, had just finished remodeling the dining room when they decided to reorganize and focus on full-time catering.

But Blick missed the restaurant. "It was crushing to go in there," he said. "It was the worst time in my whole life."

To reopen, the couple raised money through GoFundMe and took on minority partners to restart the family-oriented restaurant. (Dadant now works for Helmand Kabobi to allow her to spend more time with their 11-year-old son, Zeke.)

He admits that opening the doors again around Christmas was “quite possibly the worst time to open anything,” but Blick said he’s reinvigorated by Clementine’s return....

He admits that opening the doors again around Christmas was “quite possibly the worst time to open anything,” but Blick said he’s reinvigorated by Clementine’s return....

Back in the kitchen, Blick is focusing on the food he knows best — like meatloaf, mashed potatoes and charcuterie — with ingredients sourced from local suppliers.

"We get products from farmers we know, who raised it correctly," he said. "We treat the animals with dignity."

His sincerity and cooking expertise show in his dishes. On the charcuterie and cheese plate, Blick displays an array of meats that he cures himself, cheeses and housemade pate. Our bountiful board was filled with saucisson (dry, cured pork sausage), mortadella (Italian sausage), braciole (cured beef), blueberry jam, chicken-liver pate tinged with whiskey, Gruyere and cheddar cheeses, pickled vegetables, homemade Dijon mustard sauce and toasted baguette slices. It was a delicious spread.

A baby kale salad with pickled grapes, pickled shallots and smoked tomatoes glistened with a classy vanilla vinaigrette and was sprinkled with a tangy ricotta salata. It was a sumptuous, inspired beginning.

Blick has been making meatloaf for 25 years, he said. Maybe that's why he calls his dish "Winston's world-class meatloaf redux."

We can only offer our own accolades. The juicy slabs of meat sat atop creamy smoked Gouda mashed potatoes, both draped with a luxe brown gravy and bolstered by sauteed green beans. You'll want to clean the plate.

Blick labels his mac and cheese "famous," and after sampling this baked, cheesy dish, we'd have to agree it deserves recognition far and wide. It's notable in that it sticks to the tried-and-true basics and isn't gussied up with extras.

We really liked the idea of the Everglades Rod & Gun Club offering, a rendition of a dish that Blick tried at the Florida restaurant. The moist catfish with sauteed bell peppers and onions would have been terrific — except that too much melted cheese buried the other flavors. The accompanying sauteed melange of mushrooms, green beans and carrots was a flavorful partner.

When we saw rumbledethumps on the menu, we knew we had to order it just so we could say the word out loud. It's not a fanciful Dr. Seuss creation; it's a real combination of potato, cabbage and onion with Scottish origins. Blick makes his version with sauteed cabbage and mashed potatoes, which serve as a base for two massive, wonderfully smoked and seared boneless pork chops topped with apple jam. We would order this hardy concoction again in a heartbeat.

In the past, Clementine was known for Taco Tuesdays. Since the restaurant isn't open on that day now, it has switched the promotion to Wednesdays.

The regular menu isn't offered, but the creative tacos ($13-$14) are worth a visit. Fillings include beef chorizo, duck, catfish, fried pork belly and vegan (mushrooms, sweet potatoes and squash blossoms). They're paired with refried beans, rice and various salsas.

When the restaurant originally opened, Blick's mother often baked the desserts. The delectable coconut cake, in particular, was in demand.

Now an in-house baker re-creates that cake and a chocolate peanut butter cake, both with great results. Because Blick likes pies, you'll find one or more on the menu, too.

We loved the bourbon-pecan pie and coconut-and-rum pie, where the flavors soared and matched the intent of the restaurant — offering guests good home cooking.

The eclectic, comfortable dining room is still charming, with strings of lights across the ceiling, mirrors, wood tables, church pews and artwork like barnyard animals and a sketch of Willie Nelson on the walls.

There's a small bar in the front that offers beer, wine and select cocktails.

To help his bottom line, Blick has trimmed seating to 75 and has streamlined staff. But that doesn't mean each table isn't taken care of professionally.

Our waitress was efficient, cheerful and remembered the name of the teenager at our table, which made him feel special. The restaurant served a number of children of all ages during our visits.

Blick plans to introduce brunch soon and will slowly expand the menu with additional fare. For now, he's content to feed customers with a dependable lineup of favorites.

"I missed that aspect," he said. "You are making something with your hands and feeding it to somebody. It's an honor."