Can you solve the mystery of this afflicted St. Petersburg statue?

ST. PETERSBURG3 Weeks Ago1 Month AgoMore than a Year agoShe slumps beside the sidewalk on a plaster stump, right arm resting on her thigh. Her right hand fell off long ago. Her left arm is gone.Her torso, draped in concrete cloth, is turned toward the house,... 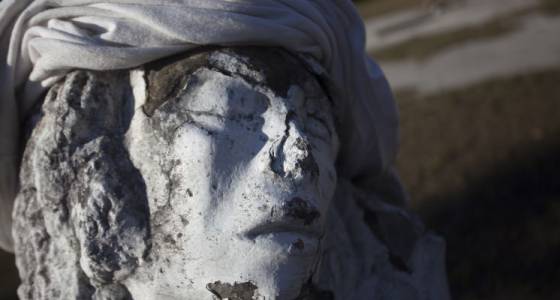 She slumps beside the sidewalk on a plaster stump, right arm resting on her thigh. Her right hand fell off long ago. Her left arm is gone.

Her torso, draped in concrete cloth, is turned toward the house, as if she were watching it. But her eyes are closed — as if she can't bear to see.

The statue is life-size; its features, eroded. It sits on the edge of 22nd Avenue S, at the edge of 46th Street, next to a no-name corner store. Its bare feet are rimmed by broken Snapple bottles.

Every day, dozens walk past the statue while cutting across the scrubby yard; about 15,000 people drive by. No one seems to stop. But some, like me, must wonder. How did a huge, once-ornate statue wind up outside an abandoned house in a run-down neighborhood? Who was she?

Or he? Gender seems indeterminable. There are no defined breasts or biceps; the shoulder-length hair could be the locks of a Greek god. The lips are full, the nose missing. The bare butt is crumbling but perfect. The body language, to me, seems feminine. I'll call her a she.

I wonder what she has seen. And why she looks so afflicted.

In January, someone draped a T-shirt over her peeling face. To preserve the plaster? Keep the shirt out of the dirt? I like to think it was to spare her the sight of her pink house falling apart.

Once, they must have been lovely, the home and the statue.

The house was built in 1921, property records show, on what was then four lots — a half-acre hugging the trolley tracks that carried folks from St. Petersburg to Gulfport Beach.

White columns shored up the sloping roof, which shaded tall front doors. There were six bedrooms, three baths and a fireplace — almost 4,000 square feet of living space. Outside, a large pool yawned under live oaks.

One of the columns is missing now. Boards block some windows; other windows are shattered. For years, a faded blue tarp has blanketed the old shingles. The pool is filled with dirt and daisies.

It was once a cafeteria for Country Day School, said April Hornsleth, who went to kindergarten there, on grounds covered with doll houses and blow-up boats. The school closed in 1956, and the house became a home, and sometime in the early '70s, an artist moved in and started working on the statue. The left arm, now gone, shielded its face. She thought it was American Indian. Another longtime resident thought it was a protest to the Vietnam War.

"That was a real love story, him and that house, and him and my mama," said Roberta Beachman, whose papa lived there until 2005. Her parents had met when they were 7, married young and been divorced for years. But in 2000, after Mama's second husband died, she moved back in with Papa until their daughter moved them both to Tampa, where she could care for them. "Papa even built a secret room in there. If there were any shootings, any trouble at all, that was supposed to be our sanctuary."

She remembers the life-size statue in the front yard. So does her brother, Ernest Jr. But they don't know what it is supposed to be. She thinks maybe a mermaid. He, a young fisherman. Both were surprised that after all these years, the statue is still there.

The property was sold again last month. During a foreclosure auction, a bank bought it for $33,100. Workers came to mow the yard, board more windows, drape a new brown tarp over the old blue one.

The T-shirt disappeared, leaving the statue's troubled face turned to the sun.