'The Bachelor' recap: Frozen in Finland, with Corinne left in the cold

This week's episode of "The Bachelor" is only an hour, which would be outstanding news except that it means next week's is THREE HOURS LONG. You guys are lucky I love you.Quick catch up: Last week was hometown dates, and Nick met the families... 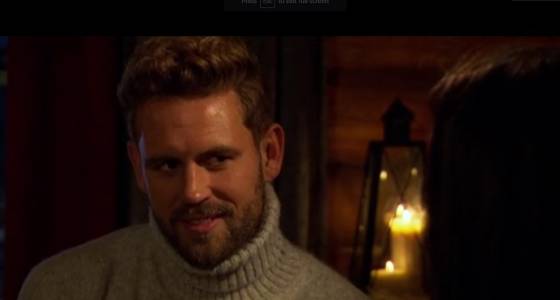 This week's episode of "The Bachelor" is only an hour, which would be outstanding news except that it means next week's is THREE HOURS LONG. You guys are lucky I love you.

Quick catch up: Last week was hometown dates, and Nick met the families of Corinne, Vanessa, Rachel and Raven. As the episode ended, Andi Dorfman “unexpectedly showed up,” and her entrance is where we begin tonight.

Andi is wearing very high heels, tight leather pants, a sheer black shirt and an aggressive amount of makeup, which is the outfit a woman wears when she wants either the night to last until the next morning, or a man to know he will never have better than her. I’m pretty sure Andi’s intentions are the latter, but the show just started.

While Nick sips cocktails and reminisces with an ex, the women he is currently dating are left standing outside waiting on him in freezing cold weather. His genuine lack of regard for others is so charming. Except not at all.

The conversation between Andi and Nick is just another reminder that he’s done this a few times (dollar). He says, “I’m not going to get engaged just because I’m the Bachelor,” which I translate to, “If they’re going to keep letting me ride this wave, I’m going to do it. Did you hear I’m on 'Dancing with the Stars' next season?” (Despite how many times I’ve made that joke, it seems like it actually turned out to be true.)

But first, as a quick reminder: Last week, after walking into the women’s hotel room without knocking, Nick sent Kristina home last minute. So...

But first, as a quick reminder: Last week, after walking into the women’s hotel room without knocking, Nick sent Kristina home last minute. So...

Andi asks Nick if he’s going to have sex with any of the women in the fantasy suite, which is hilarious. Not because we all know the answer is yes, but because she made Nick look like a jerk on national television for confessing that they had sex in the fantasy suite during her second run on the show. She was so bothered by it, in fact, she wrote a book to talk about it.

After this “unexpected” reunion, I think it’s safe to say that Andi’s next book will be a “tell all” about forgiveness.

Finally, Nick decides to make his way to the event he’s hosting and greets the women by apologizing for making them wait after he intentionally made them wait while drinking with an ex.

He decides to send Corinne, this season's villain, home and she is devastated. I am too, because now the three-hour episode will be even more dreadful.

I hate this season so much.

Nick tells the remaining women that they’re off to Finland, and to quote a friend, “I hope he doesn’t ruin the country for me. It’s actually beautiful.”

On his way to Finland, Nick reminds us all that he has experience with fantasy suites, because sex and his multiple years of being on a reality dating show are the only thing he knows to talk about. Dollar.

After he treks through the Finland snow while probably thinking about "Dancing with the Stars," Nick is met by Raven and her terrible Southern accent. They hop in a helicopter and go straight to the pub to play darts. I would need a drink to get through this, too.

They talk about what their future would look like, and Nick asks, “Can you fold clothes?” which is something every woman wants to be asked by a man they’d like to marry. Also, it’s 2017 — who does their own laundry anymore?

Raven says that she is nervous because she’s never had an orgasm before and, well, I’m guessing that’s not going to change any time soon. She also confesses that she’s only been with one man — the one whom she beat over the head with a stiletto — and that she’s never said, “I love you.” These are not things I would ever share with a new boyfriend, but I’ve also never been produced.

When it’s time for dinner, Nick takes off his coat to reveal that he is wearing a turtleneck that is probably larger than all of Finland. I do not know who told him to do this, but Nick, they hate you.

Raven decides it’s time to say “I love you” but she’s incredibly nervous. So nervous that she can’t put down her wine, which again, I totally understand.

Nick takes it away and looks at the camera, basically telling them that he knows it’s a distraction for the camera and he doesn’t want to have to reshoot. He’s got this producer thing down after four seasons.

She finally shares her feelings and, despite his turtleneck and rehearsed tears, kisses him.

Nick offers her the fantasy suite invitation; she accepts and then tells him that she’s only been with one man and that she’s never had an orgasm. Nick’s already been with two women in fantasy suites and they both dumped him. Pressure's on, Viall.

Vanessa, because she is the perfect combination of Andi, Kaitlyn and Jen.

I was obviously wrong about Corinne, but because Rachel was already announced as the next Bachelorette, do we think that they’ll keep her as one of the final two? I just don’t see Raven getting that far, but I guess we have THREE HOURS to learn more about her…

Thoughts? Leave them in the comments.

LINE OF THE NIGHT

“I will never kiss up to a man again in my life. I’m done. I want to go to sleep.” – Corinne when she is sent home.

Let me know what you think on Twitter @abbydraper. See you next week.