To the hoteliers who are pushing state lawmakers to tax and regulate home and room rentals, the target was clear: Airbnb, the multi-billion dollar corporation that they believe has been unfairly helped by its ability to operate outside the law.But the opponents... 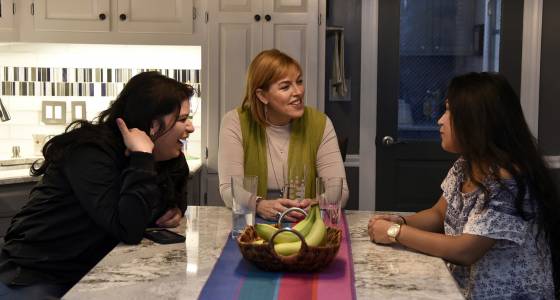 But the opponents they faced at a hearing in Annapolis last week were different.

Michele Davidson, a nurse educator, testified that she's relying on the money she makes renting her Smith Island properties to pay for her four children's college tuition.

Jeannette Belliveau of Baltimore, a former journalist, said the two rooms she rents in her house in Upper Fells Point are "kind of all I've got."

As state lawmakers debate how to regulate short-term rentals, the mismatched portraits underscore one of the challenges that regulators face: how to make the old tools, long used to regulate traditional enterprises, fit new business models.

Maryland lawmakers have passed bills in recent years to clarify rules for online travel sites and the rideshare app Uber. They're looking at Airbnb and a more aggressive online sales tax collection this year. The state's Office of Food Protection is looking into questions around new meal and food delivery services. Federal authorities are studying online lending.

Airbnb, like Uber and other firms in the so-called sharing economy, is powered by a shifting crowd of independent contractors, such as the people who testified last week. They use online platforms to connect to consumers — in the case of Airbnb, travelers looking for accommodations — and the corporation takes a piece of any transaction.

That's big business. Analysts estimate the company's value at $30 billion, and the firm expects to make $3.5 billion in profit by 2020, Fortune writer Leigh Gallagher reports in a new book.

But the firm has helped its hosts make money too. And the hosts say they're the ones who will be hurt by the rules, backed by Marriott and other hotels, that lawmakers are considering.

"This is about big business taking over from citizens who work every day," Davidson told members of the Senate Finance Committee.

T.J. Maloney, Marriott's senior director of government and public affairs, said there's room for both hotel companies and short-term rentals. He told the panel that Airbnb has triple the number of listings worldwide as Marriott has hotel rooms.

"This is a large, sophisticated player and they're making a lot of money here in the state of Maryland, in essence by ignoring local laws that vary county by county and by not collecting the sales and lodging taxes," Maloney said. "We are here today asking for parity on that front."

Traditional hotels are making a push to require people who rent out their homes to guests to pay the same taxes and follow many of the same regulations that they do.

A bill before the Maryland General Assembly, backed by the hotel industry, is aimed at regulating short-term rentals through Airbnb...

Traditional hotels are making a push to require people who rent out their homes to guests to pay the same taxes and follow many of the same regulations that they do.

A bill before the Maryland General Assembly, backed by the hotel industry, is aimed at regulating short-term rentals through Airbnb...

Michael Sanderson, the executive director of the Maryland Association of Counties, sees the back-and-forth over Airbnb in the tradition of wrangling over corporate regulations to keep up with technology.

But he said the dynamics of Uber and Airbnb — which have not been shy about mobilizing users to their side — have changed the flavor of debates.

Earlier changes were "sort of corporate versus corporate," he said. "A lot of this is individual- and small-business- and citizen-driven."

Rajshree Agarwal is director of the Ed Snider Center for Enterprise and Markets at the University of Maryland's Robert H. Smith School of Business. She said it's not surprising that local governments are starting to look more carefully at how to tax online transactions.

But she said authorities shouldn't try to regulate problems that don't exist just to satisfy existing interests such as hotels while discouraging participation from more casual users.

"I do think there is a huge amount of regulatory attention because of incumbent pressure on the regulators," she said.

The bill the General Assembly debated last week would require hosts on Airbnb or other sites, such as VRBO, to register with the state and comply with many of the same standards — such as providing sprinklers — as traditional innkeepers.

Supporters say such measures are necessary to ensure that guests are safe and hosts are paying taxes. And they argue that the proposal is about fairness — they point to investors who use Airbnb to advertise properties they've purchased as mini-hotels.

"It equalizes everything," said the bill's sponsor, Democratic Sen. Joan Carter Conway of Baltimore, who made her case before the Senate panel Wednesday. She has said she is willing to drop the sprinkler requirement.

Airbnb, an online booking site for home rentals, was still in its infancy when Ed Bendetti splurged on a second property in Fells Point in 2008, drawn to the challenge of a renovation project.

Now, seven years later, with the upgrades complete and its own Web listing, the Dallas Street home has...

Airbnb, an online booking site for home rentals, was still in its infancy when Ed Bendetti splurged on a second property in Fells Point in 2008, drawn to the challenge of a renovation project.

Now, seven years later, with the upgrades complete and its own Web listing, the Dallas Street home has...

Airbnb has said it is ready and willing to collect taxes on bookings. It already does so in many places, including in Montgomery County, where the firm has collected $14.5 million since 2015. Hosts are already responsible for paying income tax on their earnings.

But Will Burns, the company's public policy manager, said the firm is worried about regulations that would discourage hosts, who don't have the same kinds of resources as hotels.

"We try to work with states and cities and counties on how to regulate the industry, but also allowing the industry to continue to grow," he said. "We want to make it as easy as possible for our hosts to comply with the law."

Regulators are racing to catch up with changes in how consumers shop, travel, fundraise, eat and run errands.

Nearly three quarters of U.S. adults have used some type of shared or on-demand service, such as buying a second-hand good online or contributing to an online fundraising project, Pew Research Center reported last year.

That means more than $57.6 billion in spending, according to the 2015 National Technology Readiness survey of the Robert H. Smith School of Business.

The number of people who earn money on digital platforms such as Airbnb is small — about 1 percent of adults in any given month — and changes frequently, the JPMorgan Chase Institute reported last year. One in six participants in any given month is new, and half leave within a year.

Fiona Greig, director of consumer research at the JPMorgan Chase Institute, said the research shows that the sites have created a new way for people to quickly find temporary work when they need it.

"This is a new financial strategy for families to embrace," she said. "It reduces a lot of friction in labor markets and in some ways creates new opportunities for people who were out of work."

Belliveau, 62, said the roughly $24,000 a year she makes renting out rooms in her house provides her main source of income, and has allowed her to stop living with a roommate.

For Marilyn Harris-Davis, 64, rental income is the difference between being able to pay the mortgage for the house on her family's summer property near Annapolis and having to give it up.

Harris-Davis and her two grown sons stay at the three-bedroom house occasionally, but most of the time she rents it out to visitors through websites such as HomeAway and VRBO, where she advertises it as a "quiet relaxing waterfront Suisse chalet retreat."

"There's no way I could afford that house," said Harris-Davis, who lives in Baltimore. "The only way I can keep this property is to rent it out."

Airbnb, the online booking site, said Wednesday it has reached an agreement with Montgomery County to start collecting hotel tax on behalf of its hosts, the first such agreement in Maryland.

The San Francisco firm has similar agreements in more than 160 jurisdictions around the world. It is in...

Airbnb, the online booking site, said Wednesday it has reached an agreement with Montgomery County to start collecting hotel tax on behalf of its hosts, the first such agreement in Maryland.

The San Francisco firm has similar agreements in more than 160 jurisdictions around the world. It is in...

Stephanie Fleishman uses the income from renting out her guest room to make improvements to her Canton house. When she retires, she says, the rental money might become an important part of her income.

As an Airbnb host, Fleischman sees herself as kind of an ambassador for the city. She often hosts people who are scoping out the neighborhood while planning a move to Baltimore.

"It's not just about hosting somebody in your home," said Fleishman, who owns a gift shop. "It's about showing them as a local the neighborhood, where to go, what to do, how to get what they need."

Middleton said his priority is to establish a "simple, easy" registration process for short-term rentals and ensure that bookings get taxed.

Middleton said he doesn't want to push any "mom and pops" out of business, especially not in rural areas where they're often the only option for visitors.

"If we did anything to harm them, it would be shameful," he said.

Niam Yaraghi, a fellow at the Brookings Institution Center for Technology Innovation, said regulators should focus on risks to consumers, not competition with traditional businesses. For example, he said, neighbors often worry about strangers cycling through hosts' homes, and studies have pointed to evidence of racial disrimination by some hosts.

"The litmus test for regulators ... is the consumer's rights," Yaraghi said. "They should absolutely not care about the other types of businesses. At the end of the day, it's competition and survival of the fittest."

Rules governing Airbnb elsewhere have had limited degrees of success.

San Francisco, for example, estimated last year that 80 percent of Airbnb hosts had failed to register with the city as required. In Montgomery County, only a taxing measure passed, despite plans for other regulations.

Stephen R. Miller , a professor at the University of Idaho law school, has written a paper about the principles new regulations should embrace.

He said he thinks traditional strategies, whch rely on licenses and zoning, haven't been effective because they often focus on hosts, rather than platforms. (Airbnb has sued over rules that would penalize the company for hosts that do not comply with local rules, including registering their properties.)

He said more information and more experimentation are needed, particularly at the local level, to get the right balance for communities.

"We're at this new point where things are starting to evolve," he said. "We need to see what that will be."