With the opening of Shake Shack in LAX's Terminal 3, fliers will get a little bit of heaven on a bun

Shake Shack, which grew from a hot dog stand in Manhattan to a burger behemoth, will open in another Los Angeles-area location in the fall — this one at LAX’s Terminal 3.The crazy popular burger chain will serve breakfast daily from 7 a.m. to... 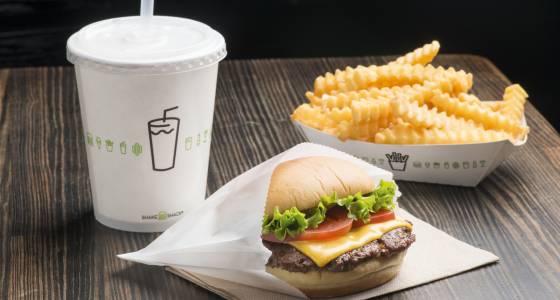 Shake Shack, which grew from a hot dog stand in Manhattan to a burger behemoth, will open in another Los Angeles-area location in the fall — this one at LAX’s Terminal 3.

It’s almost enough to make you want to fly the much-maligned Spirit, which flies out of Terminal 3. Fortunately, JetBlue and Virgin America also fly out of Terminal 3, along with low-cost Frontier and Allegiant.

Shake Shack opened its first California location in March on Santa Monica Boulevard in West Hollywood. Now there are four in L.A. and three in Las Vegas.

When it opens, it will join these Terminal 3 restaurants: L.A.’s own Angel City Brewery; the grab-and-go Blue Window, which features wraps, burritos and vegan options; as well as Burger King, Starbucks and Peet’s Coffee.

For those who haven’t tried Shake Shack yet, First We Feast makes it easy. The website made the “definitive ranking” of the 12 best menu items and put the Double ShackBurger at the top of the list, followed by the SmokeShack, which comes with applewood smoked bacon on top.

In case you get hopelessly hooked, don’t worry. You can find Shake Shacks all over the world, including 13 locations in the Middle East, London, Istanbul, Tokyo, Seoul and Moscow.