Up in the ratings and live after Trump's speech, Stephen Colbert parades a new confidence

It’s worth remembering that just a few months ago, informed sources had Stephen Colbert being just another so-so ratings week away from surrendering his timeslot to later-night host James Corden.Now, though, the host of CBS’s “The Late Show” is riding... 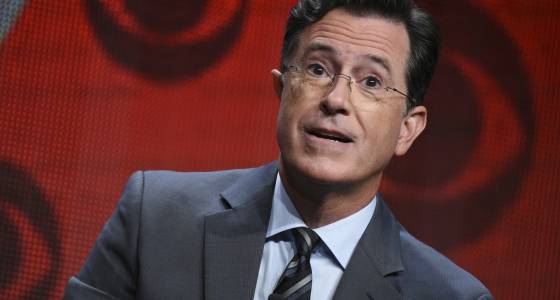 It’s worth remembering that just a few months ago, informed sources had Stephen Colbert being just another so-so ratings week away from surrendering his timeslot to later-night host James Corden.

Now, though, the host of CBS’s “The Late Show” is riding high, fresh off of a February in which he won successive weeks’ ratings races against the “Tonight Show” and host Jimmy Fallon, a feat he hadn’t pulled off since his first weeks in the prime network job.

Seventeen months in, Colbert seems more at ease in his role, even as he parades nightly his discomfort with the direction in which the nation is heading. His suits look more comfortable, bearing a cut befitting a man in his 50s, rather than the short, tight numbers CBS had him squeezed into early on. Even his show’s “cold opens” -- the comic bits that come on before the title is announced -- have become consistently funnier.

Colbert took a kind of victory lap Tuesday with a live show following up on President Donald Trump’s address earlier Tuesday night to a joint session of Congress.

Live shows reacting to Trump have been a strength in Colbert’s gradual rise in the ratings, and this one, again, showcased a host, and a staff, who can be funny on deadline -- and, as important, who are willing to make the effort to do so.

Trump was on his most statesmanlike behavior yet during the speech, which didn’t leave Colbert a whole lot to work with, but the Second City-trained comic picked his spots to continue his vehement opposition to the president himself and most of what he stands for.

Showing Trump being introduced before the legislators, Colbert said, “Any chance there’s a mistake and ‘Moonlight’ is the president? I guess not, no.”

He tweaked Trump for, in business deals, refusing to pay his contractors, for having his Trump brand ties made in China, for his confused remark about supposed events in Sweden. There was also, alas, another tiny hands joke, as tired now as the ones about Trump’s hair used to be, but apparently irresistible. Resist them.

And in bantering with musical director Jon Batiste about how they’ll observe Lent, which begins Wednesday, Colbert said, “I’m thinking about giving up hope. It’s either that or alcohol. One of them’s got to go.”

The raw, throbbing nerve that the election has exposed in Colbert is a big part of the reason he is winning now. People wondered, when he agreed to transition from his “Stephen Colbert” right-wing blowhard character on Comedy Central’s “The Colbert Report,” how he would do as a real person.

Winning viewers via dismay over the choice of the American people was no sure thing. When Colbert went live on election night, prepared, by his own account, to mark Hillary Clinton’s victory, the surprise result had him somewhere between discombobulated and distraught. And it was undisguised.

“This one is a nail biter and a passport grabber,” Colbert said, early on, as the tide was turning against Clinton. “It feels like we’re trying to avoid the apocalypse, and half of the country is voting for the asteroid.”

Later, when the likely result was clear, so was Colbert, in an ad-lib: “I’m not sure it’s a comedy show at this point. I think we’re in the middle of a documentary right now.”

Yet instead of smoothing out those emotions after the election, instead of getting over it, more or less, Colbert embraced them. He set himself up as the opposition, delivering sharp-tongued rebukes to every Trump faux pas, which left him an abundance of material. And as the Trump presidency moved from impending to actual, viewers have trickled Colbert's way.

I like to think that people are reacting not just out of their own shared qualms about Trump, but to the sincerity in Colbert’s stance. Yes, Donald Trump, president, has been good to Stephen Colbert, talk-show host, but what comes through the screen is the opposite of opportunism.

Colbert  comes off as genuinely concerned for his country and genuinely appalled by the character of the man in the Oval Office. And if you’ve watched him closely on CBS and before that, you sense that he would surrender the ratings bump -- and maybe even the 10:35 p.m. timeslot -- in exchange for different election night outcomes in Ohio, Pennsylvania and Wisconsin. These jokes he tells come from a place of principle, and the studio audience feels this, now chanting his first name, like in the Comedy Central days, when he digs hardest into Trump.

So the live shows have been a turning point for Colbert, beginning with his going live during the Republican National Convention during the summer. Since then, he has taken every opportunity to show his chops, and viewers have been reminded of how nimble a performer he is.

And doing these shows has helped him, I think, settle into the network role. When you go live, you react, you write, you perform. There isn’t the time to worry over the material or approach. You do the best you can do in the time available and then you trust your training and talent to carry you through.

In the early days, viewers saw a guy trying too hard. Colbert danced and sang a lot more; he’s actually a graceful dancer and a respectable singer, but a few steps at the outset of every show were a few too many. If we want to see celebrities doing the ol’ soft shoe, we’ll go back and watch clips of our energy secretary on “Dancing with the Stars.”

Colbert, back then, was squeezed into those demographically targeted suits, which forgot the cardinal rule that your kids do not like it when you try to dress like them; just be dad, confident in your loafers and sweater. The show’s content bounced around a bit, too, not quite finding the right comic set pieces.

In the long stretches of “The Late Show” in which celebrities hawk their wares -- this is the format network late night has chosen, and it apparently is, yawn, sacrosanct -- Colbert could be a superb interviewer, but he too often seemed too anxious to demonstrate his own wit or just to ask the next question.

If you even bothered staying past the opening comic segments, you saw conversations that weren’t allowed to develop. To see the progress on that front, have a look at his talk Monday night with "Nashville" star Connie Britton. Entertaining and informative conversations like that are now more often the norm.

At the same time that Colbert was being raw and brutally funny about the president-elect and then president, Jimmy Fallon was tousling the guy’s hair.

Think what you want about Donald Trump, but his candidacy and election represent a pretty serious moment in the life of this nation. The proper response, from the alt-right or the progressive left, is not to muss his hair, which Fallon actually did on a September “Tonight Show.” It was a symbol of Fallon’s comedy -- which relies on celebrity imitations and frat-boy games with movie stars --- not being equivalent to the moment.

There are some caveats to all of this, the biggest one being the size of the numbers involved. The way we in the press talk about late-night TV, you’d think most of the nation watches. And it is an important safety valve and mood barometer.

But Colbert’s victories in recent weeks in total viewers have meant that he’s averaged about 3 million of them a night, or less than 1 percent of the nation’s population. And Colbert is still losing to Fallon among the 18-to-49-year-olds that advertisers continue to prefer, despite that demographic’s well-documented crippling college debt.

But what really matters is the content, and, there, Colbert has found his groove. It was evident even in his response Tuesday to Trump’s speech. The show was gleeful in advance promotions, but the comedy didn’t come quite as easily as it had after presidential tweetstorms and that lengthy press conference.

“I thought it was a good speech,” Colbert admitted to a guest, former press secretary to President Obama Josh Earnest.

Colbert was actually sharper, and probably more dismayed, in chronicling the Democratic Party’s official reaction to the speech. The party that is getting walloped almost everywhere in the nation put former Kentucky Gov. Steve Beshear in a diner with “real people” as his backdrop.

“Showing a retired politician from a darkened cafeteria reinforced the Democrats’ central message for 2017: ‘Please don’t tell them where we’re hiding,’” Colbert said. “People who believe Donald Trump is an existential threat to this nation, to the experiment of democracy, to Western civilization itself, take heart! Because, for their powerful rebuttal, the Democrats showed a rerun of ‘The Andy Griffith Show.’”

Another turning point for Colbert came, again, during the Republican convention shows. He brought back the “Stephen Colbert” character, who has visited occasionally since then, and so have some of the signature bits. It’s not like “Stephen” is a regular, but seeing him has helped in negotiating a peace with his departure.

And maybe that gets at most of what is going on here. Maybe, through the medium of President Trump, we are getting used to Stephen Colbert not being “Stephen Colbert,” and maybe he is, too.

Jon Stewart mocks Donald Trump, slams his first days in the White House: 'This nation is in crisis'

Colbert reaches a ratings milestone at start of Trump era

Stephen Colbert's anti-Trump experiment is starting to work with viewers