Galleries Videos CONTACT ADVERTISE
Girne 0°
BUSINESS EDUCATION ENTERTAINMENT HEALTH POLITICS SCIENCE SPORTS TECHNOLOGY
08:11 Stick it to “The Man” at the Zero Trust Security Summit
04:37 What to Consider When Starting Your Own Business
10:17 Clover POS System for Dental Offices
06:14 How Mobile Technology is Revolutionizing the World of Poker
20:31 The Importance of Banks in Our Lives
05:46 Things to Consider When Hiring a Criminal Defense Lawyer
09:15 Couple T-shirts are ideal for spicing up relationships
09:01 Laser Tattoo Removal and Its Amazing Benefits
07:58 Consolidate your medical bills with a debt consolidation
19:48 Is your mind a certain people? Elina Tanskanen gives a task, which you...
BIST
120024
GOLD
300.005
USD
5.9452
GPB
7.7397
EUR
6.5425
Breaking News
Why Go for Physical Therapy and How to Find the Best Therapist
Close

In an age of fast fashion, one public servant is making clothes the old way. Tracy Gorman takes care of roughly 2,700 costume pieces for the city of Toronto, making about 50 new costumes per year, ranging from 1800s-era military uniforms to turn-of-the-century... 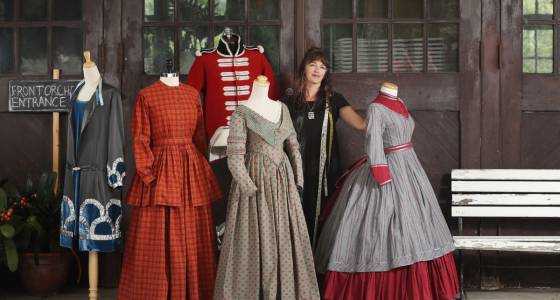 In an age of fast fashion, one public servant is making clothes the old way.

Tracy Gorman takes care of roughly 2,700 costume pieces for the city of Toronto, making about 50 new costumes per year, ranging from 1800s-era military uniforms to turn-of-the-century dresses that would have been at home in Downton Abbey.

Gorman is Toronto’s official costume technician for Museums and Heritage Services, a city job that has existed since the 1960s.

“Gosh, I have no idea how many people I dress,” Gorman, who has held this post since 1993, told the Star. She sews and maintains the costumes that volunteers wear while leading tours and programming — replicated outfits from the early 1800s to the 1930s for 10 of Toronto’s history museums, including Fort York, Black Creek Pioneer Village and Spadina House.

It’s a rare job — not an anomaly, as other major cities have similar seamstresses to fill these needs, such as the Heritage Park Historical Village in Calgary, but it’s still a surprise to many that the city has a professional costumer on hand.

Gorman works out of the Spadina Museum’s costume studio, a 55-room, 1800s-era, recently restored mansion that is Toronto’s only museum representing life in the 1920s and ’30s.

After receiving a request from a museum, she gets to work making or altering costumes, sewing, repairing and drafting new patterns. Some of Gorman’s days are spent sourcing and shopping for supplies, others on historical research.

Many historic patterns are available from historic costume books and periodicals, she said. If she’s working from a photograph and can’t find a corresponding pattern, she’ll start with a commercial garment as a guide, then design and size alterations to it.

On early weekday mornings, you might see Gorman shopping amongst the crafty fashionistas on Queen St. W., or along Spadina Ave. and in Parkdale. She said she keeps her eyes open for sales at Designer Fabrics or Fabricland.

Each of the sites and museums she works for have different budgets, “but I am the only staff and I know where to get stuff for good prices.”

Generally, the natural textiles she requires are easy to source locally but for the Fort York National Historic Site in particular, some things — like reproductions of specific buttons and lace — need to be special ordered from Historical Twist, “a source we’ve used for years” to make sure they are accurate.

“We try to honour as many of the historic details as possible,” she said. “We tend to make simpler costumes that are not highly embellished — not too many ribbons and bows.”

She also tries to honour the sewing methods as well, which means a lot of hand finishing.

“Finishing touches, like closures, are telltale signs of good reproduction costumes,” she said. “You would never find a zipper in a garment prior to the 1920s. Nor would you find synthetic buttons in the 1800s. They have to be cloth-covered, metal, wooden, shell, bone or glass . . . no plastic.”

It’s the devil-in-the-detail attention that makes the costume work — although sometimes she has to use what’s available, affordable and durable.

“I confess that I’ve used modern plastic buttons that look like one of these materials.”

Her costume eras range from Fort York’s 1812 regiment to the 1930s replications found in the Spadina Museum. The biggest challenge of her job, Gorman said, is balancing “accuracy with comfort and utility.”

The level of detail that goes into each garment is remarkable. The late 1860s women’s clothes in particular have a distinctive silhouette which is elliptical. This look is achieved with specially engineered hoops skirts as well as the cut of garments and double hems.

Museum staff who dress in her wares have to be comfortable “walking around, working with kids, working with tours, cooking in the kitchen, in front of a hearth — (so these costumes) have to be practical,” she said.

Sometimes, for very special occasions, Gorman gets to make fancier pieces — her favourite thus far being a blue silk dress with detailed silver lamé, made as a special project for a storytelling festival in 2009.

The silver lamé trim was cut into strips and then gathered and hand sewn over the velvet appliqué on the jacket to achieve the deco design, and an appropriately designed silver clasp was sourced to finish the jacket.

The dress, which is a reproduction from the 1926 dress by designer Lucien Lelong, later went on permanent exhibit and is only occasionally worn by staff.

Nancy Reynolds, currently the curator at Mackenzie House and involved Toronto’s “museum scene” for the past 30 years, worked with Gorman for 17 years as the museum site co-ordinator for Spadina House. Gorman was her right-hand woman when the museum changed their focus to the 1920s and 30s, which meant a different look at costuming for the entire building.

“I think people don’t realize the level of research that goes into these things,” said Reynolds. “She’s an incredible resource . . . to help all of us ensure our interpretations are as accurate as they can be. From hats to dresses and everything in between: men’s fashions, women’s fashions, you name it. She helps keep it interesting.”

Gorman said that sewing skills are the number one requirement to get a job in this industry. She has a background in Home Economics, specializing in clothing and textiles from Mount Saint Vincent University in Halifax.

“In theatre you can have a cutter, a pattern maker and a designer but in this (kind of job), you are all of those things,” she said. An understanding of history and a good sense for research helps, too. “I learned a lot of that as I went along.”