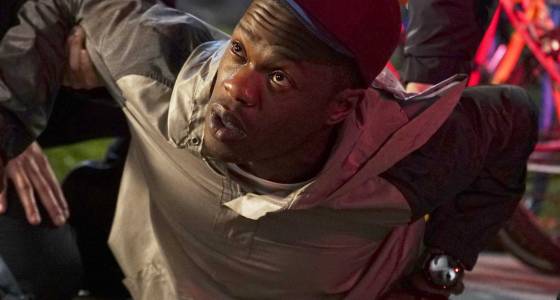 Switched at Birth concluded its campus racism storyline Tuesday night with a powerful episode that shifted the perspective of the series to its three main black characters.

Sharee (Bianca Bethune), Iris (Sharon Pierre-Louis) and Chris (Sam Adegoke) took center stage as the African-American students at UMKC protested their campus for failing to expel the white students who poured cotton balls all over the lawn of the black student union as a "joke." The story escalates after Sharee is reprimanded for yanking a megaphone away from a professor, Iris deals with the adversity of being the face of a movement despite growing up with money and Chris chooses between participating in a life-changing baseball game or supporting his friends and the cause.

A run-in with campus police pushes Chris to sit out the baseball game that could take his team to the college World Series -- and give him a shot at playing professionally. That leads to an entire team boycott, which in turn creates a domino effect of sports teams forfeiting games in solidarity with Chris and their black peers. The movement finally gets the attention of the president of the university, who not only expels the students behind the prank but agrees to meet with Iris and the leaders of the protest to address creating a more racially sensitive environment on campus.

TVGuide.com talked to Switched at Birth creator Lizzy Weiss about crafting the episode, changing perspective and where the show goes from here.

What made you want to tell this story strictly from Sharee, Iris and Chris' point of view?

Lizzy Weiss: They are not normally the kids who are on our poster. We've given them stories before, but they've always been B-stories, as we say in the writer's room. The A-stories have always been our family and our main characters. We swapped it in order to make a statement in this episode. We really felt like at this point in the story, it wouldn't have been cool or appropriate to have our white characters be the leaders and tell their story. We thought it would be a unique, fresh perspective to literally shift perspective and be only with [Sharee, Iris and Chris] and have Bay and Daphne and the parents come in and out as the side characters in their own show. It would be an outside-the-box episode and a smart way of telling this story.

Did you pick these three because the audience knows them the best? Keeshawn doesn't get his own perspective, for example.

Weiss: We did try and there wasn't enough. He has some really key moments. He has a great monologue and he has a great scene with Iris. Of course, he's really important in the scene at night in taking charge and leading with Sharee. If we had more time to lead up, and viewers had a chance to know Keeshawn more, he would have gotten his own act. It just felt like these three and you got the point. From there, we go into a universal African-American student perspective for the final two acts.

A big part of tackling a subject like this is not only who is in front of the camera, but who is working behind it. What were your conversations like with Jeff Byrd, who directed this episode and hasn't directed Switched at Birth before, and why was he the right choice?

Weiss: We were going to hire Jeff no matter what this season. We made an internal promise to ourselves with the network that we were going to make more of an effort to hire more diverse. We had always had 50 percent women, pretty much, since the beginning. That was something that was always on our radar. There had been a lot of publicity and a movement last year with #OscarsSoWhite, and I think that did a lot of good. It opened people's eyes to the fact that diverse directors are not being pulled and looked at. There was a Catch-22 situation where if you don't have the experience, you can't get the experience.

We decided to really look beyond who we normally were used to. We took a bunch of meetings with people that we hadn't seen before. My partner in running the show, Paul Stupin, and I just sort of fell in love with Jeff in the room. He's very charismatic, smart and funny. We were going to hire him anyway. Once we decided to do this episode, I ran around and said let's rearrange some things so he gets to do this particular episode. I thought it was important to us to get an African-American director. We actually had three out of 10 who are African-American this cycle. We had some great ones to choose from, but Jeff is a total leader. He had experienced something oddly similar in his college. I think it was on his baseball team, weirdly. That's the long answer; We were going to hire him anyway, but we did match him up with this episode once we arc'd it out.

Switched at Birth: What Emmett's confession means for the final season

Something I really appreciated about this episode was also showing the conflict between the black students as they're trying to figure out the right way to protest and who should be the face of the movement. Why did that feel important to showcase rather than having them be united the entire time?

Weiss: First of all, there's no such thing as "the black point of view," just like there's no such thing as the female point of view or the deaf point of view. Every person is unique and has their own thought on how to handle things. If you pull back the curtain on any Civil Rights movement, there's always disagreements. There's been intense disagreements in the women's rights movement. Right now, it's happening. Do you include pro-choice and pro-life women? Trans women? When you dive right in, that's what's really interesting. We got to really drill down in this episode and go into those kinds of details. It was really important that we show there isn't just a black students' perspective. There's multiple perspectives.

We kicked off the whole arc with a costume -- a white student dressed in a black rapper's costume. We had some black viewers on social media who said, "I wouldn't be offended." We had some white viewers who said, "Oh that's too PC to get offended." Then we had a lot of people in the middle who said, "Exactly, this is cultural appropriation. Thanks for showing this story." It's very controversial subject matter and no one is going to agree. We didn't think that every one of our characters would necessarily always fall in line. So they argued amongst themselves on the best way to handle how the cotton ball incident was mishandled by the administration. At the end of the day, they did get a unified position on it. Drama is conflict, so we had to show the truth of these characters having different points of view.

Speaking of the costume, at the beginning of this arc Daphne and Iris seemed to be on completely opposite sides of the argument. By the end of it they grew a lot closer, but how will this arc affect their friendship going forward?

Weiss: They're tight now. They had a real low point in Episode 2 where Iris felt like Daphne didn't get it and didn't instinctively get what she goes through every day, having these mini-micro-aggressions happen to her. Of course, we had to have Daphne stand in for some white viewers who don't understand and need to be educated. There's frustration that Daphne didn't get it. Everyone's point of view is based on how they walk through this world and Daphne has only experienced what she's experienced as a white-skinned deaf woman. She can't be expected to have the same experience as Iris. I'm really proud of her as a character that she listened. She listened really carefully to her friend and she opened her mind to saying, "I didn't know what it was like to be you. I'm sorry that I didn't understand." I think Daphne still believes in free speech and that people should be able to wear costumes or write editorials for the school newspaper showing what they think, but she also really respects her best friend's point of view on this. I think it's a very healthy way of showing friends who differ and coming to a place of support.

This officially marks the halfway point of the season. Now that this arc is wrapping up, what can you say about what people can expect for the final half?

Weiss: Two episodes after this one, we have our 100th episode. It's just a huge milestone. Giles Marini (Angelo), is back in a very special way since he passed away. We are really proud of that episode. It's very emotional. It's more of a "regular" Switched at Birth episode with our girls at the forefront and the parents. Lea directed it and behind the scenes it was just a really cool time. We were all running around giddy because we had made it to the three-number mark...We found out at the 100th episode that we were going to wind things down. We make a turn and start moving towards getting some closure for everybody. The series finale is a big deal.

Switched at Birth continues Tuesdays at 9/8c on Freeform.

Other Links From TVGuide.com