Stage Planner: 'Something Rotten!' opens at the Straz, Florida Orchestra does Dal&amp;#237;

4 Months Ago2 Weeks Ago6 Months AgoSO GOOD: SOMETHING ROTTENIt's 1595, and two playwrights, Nick and Nigel Bottom, are desperate to compete with their contemporary, William Shakespeare. They launch a concept no one has heard of or can understand — the... 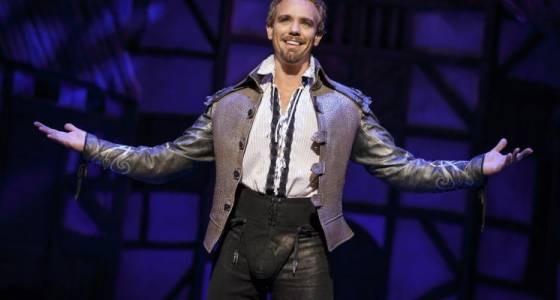 SO GOOD: SOMETHING ROTTEN

It's 1595, and two playwrights, Nick and Nigel Bottom, are desperate to compete with their contemporary, William Shakespeare. They launch a concept no one has heard of or can understand — the musical. That's the foundation of Something Rotten!, a musical comedy opening Tuesday at the David A. Straz Jr. Center for the Performing Arts.

"I was so pleasantly surprised when I got the job," said Adam Pascal, above, who plays Shakespeare. "The responses have been amazing. The show is so clever and funny and well-written."

Pascal, 46, knows a little about game-changing musicals. In the mid 1990s, he was working as a personal trainer and playing in rock bands when a friend suggested he try out for a new musical, a reshaping of the opera La Boheme in the age of AIDS.

In 1996 he cracked the original cast of Rent, a body of interwoven stories so grippingly confrontational and current, it deepened the repertoire. Pascal's portrayal of HIV-positive rock guitarist Roger Davis showcased a stylistically versatile tenor voice and a comic touch, earning a Tony nomination.

That performance immediately led to a string of other Broadway roles. In Aida, Elton John and Tim Rice's adaptation of the Verdi opera, he played the Egyptian general Radamus, opposite fellow Rent alum Idina Menzel. He starred as the emcee in a 2003 revival of Cabaret, and played other roles in Memphis and Chicago.

Those experiences make Pascal an understandable choice for Something Rotten!, an imaginative quantum leap beyond the long-running Forbidden Broadway, currently running at the adjacent Jaeb Theater. The medium Nostradamus spells out its premise early and in unusually specific terms, namely that the task of competing with Shakespeare was so daunting, it would require an equally out-of-the-box response, namely "singing, dancing and acting at the same time."

The Bottom brothers decide to give the form a try. Their work-in-progress intrigues the other villagers, even if they find it absurd.

The book by Karey Kirkpatrick and John O'Farrell, and the music and lyrics by brothers Wayne and Karey Kirkpatrick, give Shakespeare a not-so-flattering makeover, an idea the Kirkpatricks and O'Farrell had been kicking around since college 20 years ago.

"The basic idea is, musicals had never been done before," Pascal said. "And the thing about Shakespeare in our production is, he is an arrogant, silly buffoon who is certainly not above stealing other people's work. He's incredibly threatened by what's happening with these guys, and realizes that the musical that they're working on is not the next great idea — but one of them is working on this other show, which turns out to be Hamlet. And he's trying to steal that idea."

Despite his enjoyment in the irreverent look at Broadway's origins, Pascal believes musicals will endure.

"You're seeing people take amazing risks with wonderful payoffs," he said. "Clearly Hamilton is the biggest indicator of that. There is that element of a Disneyesque, hyped kind of show. But I think there are a lot of people writing things that are very cutting-edge. And there are producers who are willing to take a chance."

The Florida Orchestra pays tribute to Salvador Dalí in this weekend's Masterworks concerts. In a program jointly designed by the orchestra and the Dalí Museum, guitarist Cañizares will play Rodrigo's Concierto de Aranjuez with the orchestra, led by music director Michael Francis.