Singer-actor Sterling Jarvis is the last Canadian cast member left standing in the latest production of critically-acclaimed musical The Book of Mormon, after his only other country mate bowed out to take a gig in Australia. Born in the small Nova Scotia... 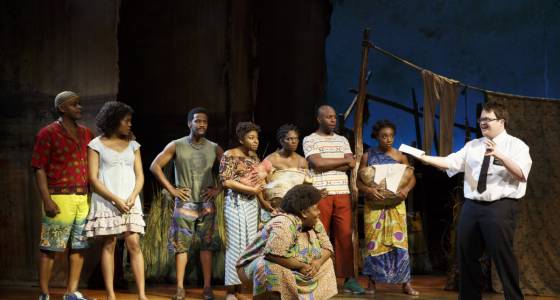 Singer-actor Sterling Jarvis is the last Canadian cast member left standing in the latest production of critically-acclaimed musical The Book of Mormon, after his only other country mate bowed out to take a gig in Australia.

Born in the small Nova Scotia fishing community of Digby (“if you love scallops, that’s where the best scallops in the world come from”), but raised in Toronto, Jarvis plays a supporting role as Ugandan community leader Mafala Hatimbi, who welcomes two culture-shocked Mormon missionaries to his village after they’re robbed at gunpoint upon arriving in the country.

“This show is the funniest that I’ve ever done,” Jarvis told the Star a few days before the show starts a seven-week run at Toronto’s Princess of Wales theatre.

How did you get started in theatre?

I started as a singer. I had a band with my brother and then got into another band and did the whole nightclub scene. I thought that’s where my career was going to go. Then I went to the open call for Lion King in 1999. The ad said “No experience necessary,” they were just looking for really strong singers. So I auditioned, didn’t initially get it, but six months later they asked if I would come back and audition again. They hired me as a swing, so I had to learn 10 different roles, and then the next year they offered me the understudy for Simba. I didn’t have theatre training, but realized that I had a wealth of knowledge around me so I just went around and started picking people’s brains, anybody who would give me advice, and tried to learn as much as I could. I did Lion King for three years at the Princess of Wales, that was my theatre school.

Along with Lion King, you’ve done big stage productions before — Of Mice and Men, We Will Rock You — but nothing quite this edgy. Is Book of Mormon a big change of pace for you?

Yeah, it is. I’ve never been in a show where the music is so beautifully written and it plays homage to all of those great musicals — Lion King, Hairspray, Joseph and the Amazing Technicolor Dreamcoat, Les Misérables — but every single song in the musical is funny. And the show is so incredibly well-written and the script is just amazing, and what I love about it is there’s satire, of course, but because it’s so smart, you really are invested in the characters and you fall in love with them and you want to follow them through this journey. There’s a really great heart to the story, it’s pretty amazing.

What’s it like being the only Canadian in the cast?

It’s a real honour to me. So many of the cast members are so excited to come to Toronto. I’m proud of my country, I’m proud of my city and I’m looking forward to showing them around and having them perform in Princess of Wales because that’s where I started my career. It’s cool to look at this iconic show that I’m a part of, being able to come back to my hometown and playing in the same theatre where it all began for me. It’s actually pretty emotional for me, I’m really excited about it.

Did you see the show in any of its previous iterations?

It’s funny because when the tour first came to Toronto, before I auditioned for it, I tried to get tickets and couldn’t. My daughter saw the show and just raved about it and said, ‘It’s my new favourite musical, dad.’ And then fast-forward, they offer me the tour, so it was cool to be able to say to my daughter, “You know that show that you love? I’m going to be in it.” When they were bringing me down to New York, I asked if I could see the show and that’s the first time that I saw it, and I was just blown away by it.

When Book of Mormon premiered in 2011, some critics branded it, for better or worse, “offensive.” Do you think the show still has that same bite that it became famous for, after all these years?

We’re constantly, pleasantly, surprised at the sold-out theatres all across America and through the Canadian cities that we’ve gone to. I think that’s a tribute to the writing and some of the jokes are just so, so quick-witted and so fast that some people don’t get the next joke because they’re still laughing at the one before. I mean, if it didn’t have this appeal, it would have waned out by now.

I wouldn’t say it’s offensive. It’s racy, for sure, but everything that is said in that salty kind of language is said for a reason. We even have Mormons that come to the show and they’re some of our biggest fans, they really get the jokes and they understand that it’s satire about everyone, it’s not just satire for the sake of poking fun at the Mormon religion.

Do you think the underlying social commentary in the show — on race, and gender, for example — is, in a way, even more relevant today considering the state of politics in the U.S.?

There are some moments in the show that are very à propos for the political climate down there, for sure, and that’s one of the reasons, too, that it’s still relevant and edgy. And that’s what art is supposed to do, right? It’s supposed to challenge you and I think it’s continuing to do that especially because of what’s going on in the States.

It’s overwhelmingly positive. I’ve never been part of a show where every night, there’s a standing ovation. I’ve done this show for a year and every performance, the entire audience is on its feet, clapping, singing along with us. I love to talk to people at the stage door and get the feel for their experience, and overwhelmingly, people are shocked by the warmth and the humour, and there’s very touching moments in the show as well as the satire. Everyone will love it.

What do you think makes Book of Mormon so universally appealing?

It’s a buddy story. One guy is what you might call all-American — captain of the football team, everybody told him since he was a kid that he’s going to be the next best thing — and the other is a bumbling, nerdy kind of guy and they’re paired together. They both learn about friendship and faith, not only in religion, but faith in each other and how you can have differences and still get along. That’s where the heart of this story is. That’s universal. Everybody just wants to be heard and loved and wants to connect with someone else. I think that’s why it relates to so many people. It goes beyond just satire.