When it comes to immigration stories, our Cook of the Week Norma Lara of Palatine has an unusual one. Norma was born in Mexico but came to Chicago when she was 10 months old. The odd twist was that her parents decided to move back to Mexico to open a pharmacy... 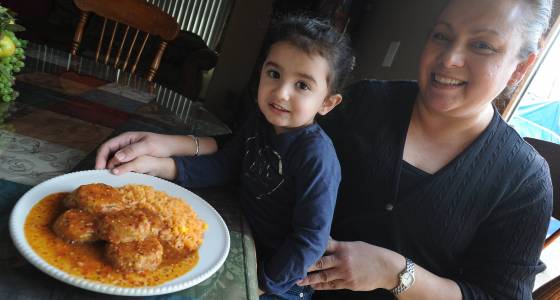 When it comes to immigration stories, our Cook of the Week Norma Lara of Palatine has an unusual one. Norma was born in Mexico but came to Chicago when she was 10 months old. The odd twist was that her parents decided to move back to Mexico to open a pharmacy when Norma was 15.

"Starting high school there was a big change. Language wasn't the issue, because we spoke Spanish at home, adapting to everything else was. It was a struggle with school -- there were guns," said Norma. Norma went to college in Mexico earning a teaching degree, taught high school English as a second language and got married. When she and her husband decided to move to the United States, it felt like moving back home to Norma.

"I was raised here!"

The Laras now have two grown children, and Norma works with elementary children, many of whom have recently come from Mexico and are learning English.

While Norma loves living in the United States and speaks flawless English, she still keeps alive her Mexican culture, particularly in the kitchen. Part of that heritage is cooking every evening, and not using packaged or canned foods.

"That is the way I learned to cook and is mainly what you would find in a Mexican kitchen. We rarely use canned or frozen goods -- maybe sometimes tomato paste in a sauce -- but other than that everything is cooked from scratch. I go to the food market every weekend and bring home four to six bags of produce."

You might think cooking from scratch takes hours and hours, but Norma says it gets easier with experience.

"For example, today I prepared a meal that takes me the longest, (she made a sort of chili Rellenos dish with zucchini and chorizo) but it was just an hour. It's a matter of practice; you get faster and faster," she explains. Norma also multitasks so that cooking is done in timed stages.

It may not be a surprise for one to learn that she doesn't use recipes for her family's tried and true favorites.

"I'm not the kind that measures either," she laughs. Norma does enjoy searching for new recipes, however.

"I used to have a lot of cookbooks, but now it is so easy to go online. I use the Betty Crocker website for baking and even for Italian food."

Most of the family favorites are Mexican dishes, however, such as Pozole -- a pork stew with hominy often made at Christmastime, and Birria, a sort of barbecue stew made from goat or beef. They also like fish and seafood such as catfish, tilapia and shrimp. Most of the dishes Norma makes have some heat.

"We use a lot of peppers. They are good for you. They help your metabolism," she says. Norma likes to make her salsas by putting the peppers on her griddle until they are blackened so she can peel off the burned skin.

"It gives them a rich flavor -- more authentic," she says.

It isn't just her family that enjoys Norma's authentic cooking. Norma's co-workers are often the happy recipients. Sometimes she will make extra food with her co-workers in mind, many of whom are from Mexico as well and will also bring food to work. A spontaneous buffet of aromatic moles, tamales and tortillas often sprouts up in the teacher's lunchroom as does conversation peppered with Spanish. La comida es muy buena.

• To suggest someone to be profiled here, send the cook's name, address and phone number to food@dailyherald.com.