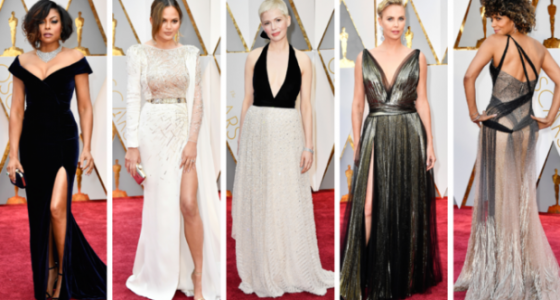 It wasn't the best of times. It wasn't the worst of times. The red carpet at the 2017 Oscars didn't have many knock-it-of-the-park moments, but it didn't have any waterfowl carcass couture either. Here's a rundown of the most memorable looks (for better or worse) from the Academy Awards.

Biggest wow factor, gown division: That was a LOT of dress worn by "Hidden Figures" star Janelle Monae, but the Elie Saab -- with its sheer top appliqued with sparkling birds and beaded underskirt below hip panniers -- perfectly suited the naturally outre star.

Worst trend: Is dishwater the new black? Felicity Jones of "Rogue One" completely disappeared in her pale, tea-length Dior, and while "Lion" star Nicole Kidman's Armani halter gown was beautifully beaded in a mandala design, it would have had much greater impact in a color. Any color.

Best red: There weren't a lot of classic red gowns, and two were surprisingly prissy -- "Loving" nominee Ruth Negga and Ginnifer Goodwin of "Zootopia," both in long-sleeved, high-necked gowns, Negga in Valentino, Goodwin in Zuhair Murad. But they paled in comparison to "Fences" winner Viola Davis in her halter-necked Armani Prive, whose elegant shape led the color do the talking.

Most anticipated look: Meryl Streep, not because she is such a hot fashion plate but because Chanel designer Karl Lagerfeld accused the actress of ditching one of his gowns because she found another designer willing to pay her. Streep denied it, and refused Lagerfeld's eventual apology. But a gorgeous gown is the best revenge: The custom-made Elie Saab belted, off-the-shoulder look is one of her personal bests.

Best old-school glamour: After the parade of dishwater gowns, Taraji P. Henson's glamorous black Alberta Ferretti with a downpour of diamonds at her neck was a welcome change. We also liked her "Hidden Figures" co-star Kristin Dunst's voluminous black ballgown from Dior.

Best dressed couple: Was this ever in doubt? Chrissy Teigen in a dramatic long-sleeved beaded Zuhair Murad with thigh-high slit and husband John Legend, a "La La Land" producer and co-star, in a perfectly-fitted Gucci tux.