CaptionCloseNASHVILLE, Tenn. (AP) — At the close of the first-ever residency at the Ryman Auditorium on Friday, country vocal group Little Big Town gave the audience a glimpse of how some of the first performers on that stage sounded like."We're going... 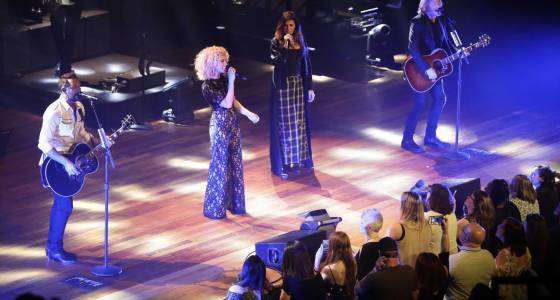 NASHVILLE, Tenn. (AP) — At the close of the first-ever residency at the Ryman Auditorium on Friday, country vocal group Little Big Town gave the audience a glimpse of how some of the first performers on that stage sounded like.

"We're going to try to sing without mics. That's the way it used to be here," said singer Karen Fairchild before the four-piece vocal group launched into "The Beginning."

The Grammy winning band launched their residency at the 125-year-old venue in Nashville, Tennessee, nicknamed the "Mother Church of Country Music," for its role in popularizing the genre. Without amplification, the room grew quiet as the four vocalists stood on the edge of the stage and let the acoustics of the venue carry their voices.

Little Big Town marks a return to their roots with the album "The Breaker," out Friday, with the No. 1 single "Better Man," written by Taylor Swift. It's the first single off their new record.

The four-piece Grammy-winning country group is also celebrating an addition to the family — singer Kimberly Schlapman recently announced that she has adopted a daughter, Dolly Grace.

Singer Phillip Sweet said the timing of these milestone events has given him pause. "It's almost like this moment is marked by this beautiful little life that has come into our world," he said. "And it's so precious and special and I think it makes us truly stop and enjoy that moment in our real lives."

Sweet and Schlapman, along with husband-and-wife Jimi Westbrook and Karen Fairchild, make up the vocal band that hit a career high in 2015 with the multiplatinum hit "Girl Crush," which earned accolades at the 2016 Grammys. They also experimented outside the genre with a pop record "Wanderlust" produced by Pharrell Williams in 2016.

And the band didn't let that momentum fade.

"We didn't want people to know who wrote it for a little while because we wanted everyone to hear the song with no subtext," Sweet said of "Better Man." ''I feel like people listened with different ears because of that."

In a departure from previous records, the band members only had a hand in writing three songs on the album. "Don't Die Young, Don't Grow Old," co-written by Fairchild and Schlapman with "Girl Crush" writers Hillary Lindsey, Lori McKenna and Liz Rose after Westbrook's sister Joyce died in 2015 due to cancer, has a poignant message for the band.

"It was kind of therapeutic for them obviously to write it," Sweet said. "This is what you would say to someone you loved. Just a reminder to always live in the moment every chance you get."

The group has a tradition on release week to play their entire album beginning to end. Friday's show was the first of at least nine dates they have booked at the Ryman throughout the year, with more dates likely to be added. Built in 1892 as the Union Gospel Tabernacle, the building has become synonymous with country and bluegrass and served as the home of the Grand Ole Opry from 1943 to 1974. Musical icons from Elvis Presley, Merle Haggard, Johnny Cash, The Carter Family, Patsy Cline, Earl Scruggs and Bill Monroe have all graced its stage over the past 125 years.

Sally Williams, general manager of the Ryman Auditorium and vice president of concerts and entertainment at Opry Entertainment Group, said the Ryman wanted the first residency to reflect the diversity of the musicians who have performed there.

"We wanted to be working with someone who was genre bending, who was very firmly rooted in country music, which is Nashville, but also very open and creative and inclusive of other genres," Williams said. "And Little Big Town is so much that."

The band also welcomed two of country music's biggest stars to the stage, Sam Hunt and Chris Stapleton, to sing with them during the show. After playing their new album in full, they finished the evening with a collection of their biggest hits including "Pontoon," ''Tornado," ''Boondocks" and "Girl Crush."

Swift, who has said she's not touring in 2017, performed "Better Man" during a special performance in Houston as part of the pre-Superbowl festivities, but Sweet said the band is ready if the pop star ever wants to perform the song with them.