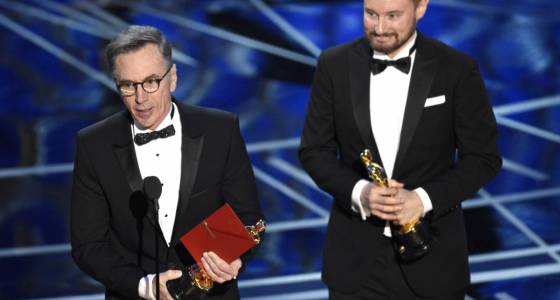 We should be clear, though: It would be wrong to suggest that Kevin O’Connell, who won the Oscar for best sound mixing for Hacksaw Ridge on Sunday, hadn’t succeeded until now. You don’t get 21 Oscar nominations without a long history of success.

But his win broke a 20-nomination losing streak, the longest streak in Oscars history. He was first nominated for the 1983 film Terms of Endearment, losing to The Right Stuff. In the 34 years since, he has been credited on more than 200 movies.

In the speech he had long awaited, he began by thanking his colleagues then pivoted to a tribute to his mother:

“And a special thank you tonight to my mother, Skippy O’Connell, who 39 years ago got me a job in sound and when I asked her, ‘Ma, how can I ever thank you?’ she looked at me and she said, ‘You know, I’ll tell you how you can thank me: You can work hard, you can work really hard, and some day you can go win yourself an Oscar, and you can stand up on that stage and you can thank me in front of the whole world.’

“Mom, I know you’re looking down on me tonight. So, thank you. Thank you all so much. I really appreciate this.”

In an interview with ABC News last week, he explained what casual moviegoers might not understand: What, exactly, is sound mixing?

“What a lot of people don’t understand about what we do is that when they shoot the battle scenes, it’s a bunch of guys running around, basically, a dirt field the size of a football field and all of the explosions are props, the guns are props, none of it makes the noises that it does,” he said.

“The only parts of the original tracks that we were able to keep were very small pieces of the dialogue. Other than that, every single explosion, gunshot, ricochet, bullet whizzing sound, footstep, everything has been recreated with period authentic weaponry to create what was essentially the Battle of Okinawa.”

Notable loser-winners in Oscar history include the composer Randy Newman. He won an Oscar for Monsters Inc. on his 16th try in 2002.

“I don’t want your pity,” he said when he finally got to give an acceptance speech. “I want to thank first of all the music branch, for giving me so many chances to be humiliated over the years.”