Vanessa Brooks held her father's face in her hands and was kind to him. 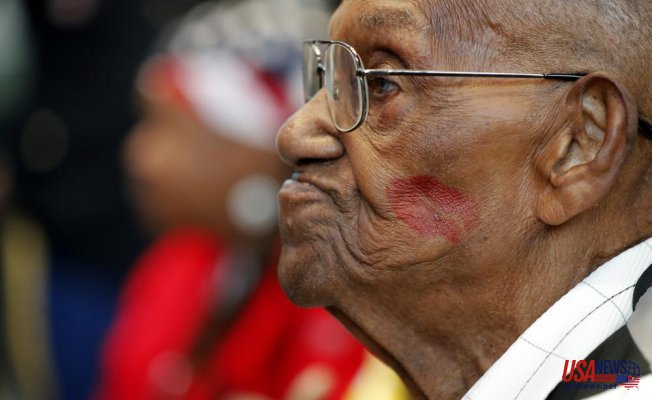 Before she could apply the shaving cream to his cheeks, she rubbed the cream along his jawline before gliding the razor across his face to create a clean line.

Lawrence Brooks sat in his large armchair in their double-shotgun house. A New Orleans Saints blanket was draped over his back. His arms were folded in his lap, and his eyes were closed. Banners from the Veterans Affairs hospital and the National World War II Museum were placed around him to celebrate past birthdays. On the dresser, was a portrait of him wearing his Army uniform, which is three-quarters century old.

Vanessa, 61, said that she wanted him to feel comfortable and happy. She was lying down on the couch with him for a rest in between giving him treatment for his swelling legs and feeding him. "If I can keep my son in a good state of mind until God calls me home, that is my intention."

She has been her father's primary caregiver for 13 years. She has tried to balance her full-time job as a neighborhood security officer with this job. It is a demanding job. As her father ages, this balance has become more difficult.

Brooks, a centenarian, is still sharp mentally. He can recount decades-old stories about his childhood in Louisiana or rural Mississippi and how he was drafted to the Second World War. His body is weak. Brooks' hearing loss is increasing, his sight is blurring in one eye and his vision is diminishing in the other. The past year has seen Brooks go to several hospitals, which have been physically and emotionally exhausting.

Vanessa begins each day early to bring him medication, clean his space, and load his wheelchair onto an electric lift for him when he goes to the doctor.

She said, "Taking care of him it's sunup to sundown."

Brooks was recently approved for a VA home-health aide program, which will allow him to visit their house during the day in order to help Vanessa. She said that there are many personal care needs Brooks is not comfortable attending to and she should take over most of the responsibility.

Vanessa was forced to take indefinite leave of her nine-year-old job in September. She is too young to start receiving Social Security and knows that the loss in income will be devastating. She considers caring for her dad the most important job she has.

She said, "I don’t work; I don’t get paid -- bottom line." "Basically, that was all I did. "I just took a leap of faith and did what I felt I needed to do. That was to stay here and care for my dad."

To support Vanessa's dad and help her care for him at home, a friend created a GoFundMe account.

The Brooks family is not the only one trying to manage priorities. According to a Rosalynn Carter Institute for Caregivers survey, one in five Americans who work full-time are caregivers. About 45% of family caregivers employed full-time said they had had to work part-time at one point or another, and approximately two out of 10 stated they had had to quit their job altogether.

Howard Gleckman is a retired policy expert at the Urban Institute.

Vanessa made the shift to part-time employment one year ago. After working shifts of patrol from 3-11 p.m., she contracted with an agency to provide an aide to Brooks' care while she was at work. The help she received was not consistent due to a lack of health care workers during pandemic.

She was becoming more tired and had to take longer breaks from work in order to support her father's needs.

She said, "When I drive, I can't really go to work tired and exhausted because I can injure someone else or myself." "I felt like I was at war with myself."

She doesn't believe she will be able to return to work soon despite receiving an aid from the VA to care for her father.

The VA stipend program is for service-related injuries veterans only.

Lawrence Brooks was part of the mostly-Black 91st Engineer General Service Regiment. This is a result of racism policies that saw many Black soldiers relegated to service-oriented positions in the segregated U.S. Army. Brooks served as a caretaker to three white Australian officers and was discharged as a private in first class in August 1945. Brooks worked as a forklift driver until he retired in his 60s.

He had surgery in May, and Vanessa was able to stay with him at the hospital. Her father fell two and a quarter months ago. His doctor diagnosed him with a kidney infection.

After he was transferred from the VA hospital ICU unit, she spent the week caring for him. His kidneys were also at risk due to fluid buildup in his lungs.

Her father began to regress when she tried to return to work after becoming depressed. She said that he didn't want to eat or drink water. He is at his best when she can stay at home with him.

She said, "That's the thing that makes him happy and that's the reason he lives." It's almost like he has me as his lifeline. He falls into delirium when I'm not there.

She shared that she loves going out to get chocolate frozen yogurt with her father, and watching sports like football and wrestling.

He enjoys sitting on their porch in the sun. He is known by his neighbors, and they all wave to him.

Vanessa stated, "I want him to have the best life." He worked hard. He cared for our family. Now I am taking care of him."