Best Memes From The 2017 Oscars: Best Picture, Meryl Streep Talking With Viola Davis And More Reactions To The Academy Awards

Oscar Sunday is always an unforgettable night, but the 89th Academy Awards had several moments that the internet can’t seem to get over.One of the most memorable moments of the Oscars came when Faye Dunaway and Warren Beatty took the stage to announce... 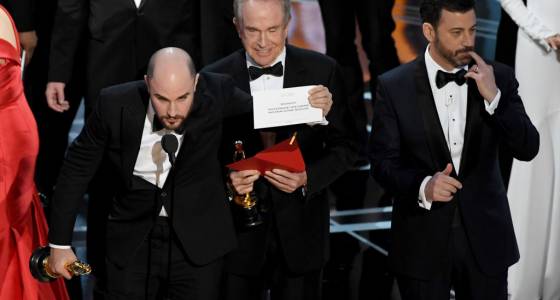 Oscar Sunday is always an unforgettable night, but the 89th Academy Awards had several moments that the internet can’t seem to get over.

Many compared the moment to Steve Harvey’s Miss Universe mix-up when he named the wrong woman as the winner in 2015 and was forced to take her crown away and give it to someone else. Host Jimmy Kimmel attempted to make light of the Oscar mishap and blamed Harvey for the mistake.

Another memorable moment from the night was when Hollywood veterans Meryl Streep and Viola Davis chatted with one another. Although it could have been a simple talk about the night or after party plans, the internet took the reunion of the two powerhouses and ran with it.

With their successful careers, praised performances and seemingly humble personalities, the internet saw the two coming together as a plot for world domination.

Let’s just say a lot of things took place on Sunday night. Check out some of the best memes that were created during the Oscars below.