It's like the crossover of e-bikes, with room for two and a capacity of almost 400 pounds.With electric bikes breaking out all over these days, how can you really stand out in the e-bike scene? Perhaps by building one that has more in common with a moped... 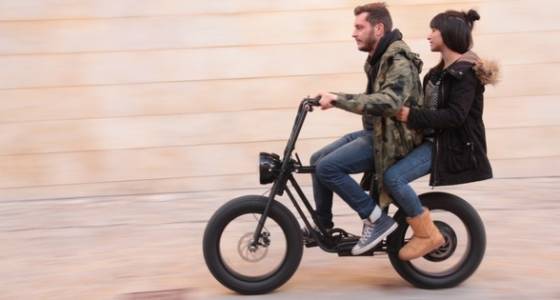 It's like the crossover of e-bikes, with room for two and a capacity of almost 400 pounds.

With electric bikes breaking out all over these days, how can you really stand out in the e-bike scene? Perhaps by building one that has more in common with a moped than with a bicycle, or by adding room for a passenger, or maybe even both.

When you have the option of a 1000W electric motor and dual battery packs powering a bike built to carry two (or one plus a bunch of gear), which lights up its path with a very large LED headlight while rolling on 4.25" tires, chances are you'll be turning heads everywhere you go, while allowing you to get around a little cleaner than your average gasmobile.

The MOKE utility electric bike, on top of offering an incredibly powerful electric motor to those who choose it, is decidedly unique in its seating arrangement, as it's the only e-bike that is designed to seat two adults (or one adult and two kids). While most riders may not choose the mega-sized electric motor for their MOKE (although I probably would, just 'cause) due to regulations governing what's considered street-legal without registration and insurance for bicycles, for those looking to regularly haul a full load, the 1000W version with dual batteries might be a good fit.

MOKE comes as an extension of a one-off project from the design and technical manager of Urban Drivestyle, an e-bike sales and rental operation in Mallorca, Spain, which the rest of the staff loved as well (and asked for their own), leading to customers asking about the "cool electric bikes" parked out front. And now the company has turned to Indiegogo with a crowdfunding campaign to launch it to a much wider group of people, and based on the success it's achieved so far (reaching more than double its funding goal with three weeks still to go), it looks like the MOKE has a hungry audience.

With three different electric motors available (250W, 500W, and 1000W), and the option to double its range, and starting at $1990, the MOKE could work for a number of different styles of riders, although it's more like an electric moped than a conventional bicycle. Granted, you can still pedal this e-bike completely manually, but its 57-pound weight might not be a great fit for those who live in places with a decent amount of hills to cover. And the basic 11.6 Ah lithium ion battery pack isn't a long-range winner, with *just* 20 miles of range (although that's still a fair distance in conventional bicycle terms) on a four hour charge, but considering it carries two people or up to 400+ pounds in total weight, it's not too shabby, either.

The MOKE is built on a rugged powder-coated CroMoly steel frame, rolls on 20" wheels wrapped in some seriously fat tires (4.25"), and evokes the feel of a classic old-school moped, yet with a decidedly modern drivetrain. The bike features a full-sized LED headlight (no tiny bike lights here), "high-end" disc brakes, a USB-out charging port, puncture-resistant tires, and 9 pre-set levels of pedal assist, along with an LCD display.

"The MOKE e-bike was designed by Urban Drivestyle Mallorca SL as a true urban utility electric vehicle: 180 kg (390 lbs) of useful load, the longest bike seat EVER and a huge selection of cool accesoires make the MOKE your personal vehicle for fun, family or work! All of this, paired with high-torque rear drive motors and the best of battery technology, will change the way you drive!"

If you're interested in the MOKE electric utility bike, check out the crowdfunding page (which also features a pretty slick leather bike helmet as a perk), or the company website.