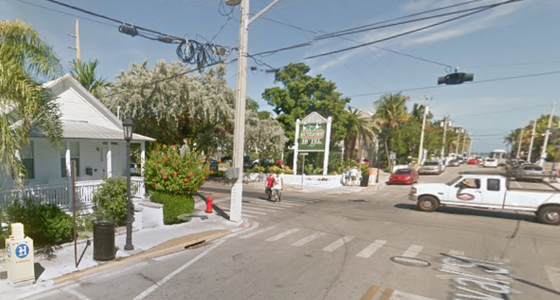 Kevin Seymour, 38, and Kevin Paul Taylor, 49, said it was a drunken tourist who followed them as they rode south on Duval Street “calling us f-----s and a slew of other anti-gay remarks,” according to a police report.

At one point, the scooter rider struck the rear tire of Seymour’s bike, knocking him to the ground.

Police were called to 1221 Duval St. about 1 a.m. Thursday for the report of aggravated battery.

“We were victims of a hate crime last night biking home from dinner,” Taylor posted on his Facebook page. “He kept stopping in front of us and swerving into us. Finally Kevin got ahead of him and the guy charges him with his scooter and runs into him and knocks him off his bike. Kevin is okay.”

“I think the cops will be able to track him down,” Taylor wrote.

Police described the scooter rider as a white man in his mid- to late 30s with “a southern accent” wearing gray shorts and a blue polo shirt. His moped was a black Eclipse.

A witness gave a statement to police backing the couple’s story and officers said there may be security video available from nearby businesses.

As the scooter followed the couple, Seymour told the man he would call 911. “If you do that, I’ll cut you up,” the man replied, according to reports.