President Donald Trump’s plan to cut foreign aid as part of a proposal to boost defense spending by $54 billion is receiving serious blowback from a somewhat surprising group: former military leaders, who say major reductions to the State Department, especially... 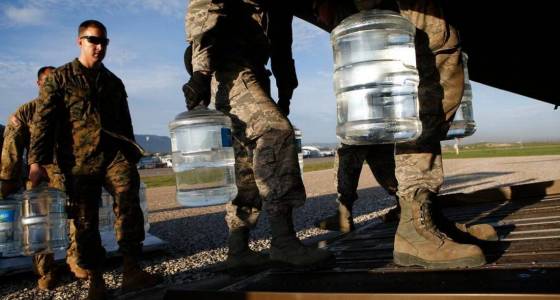 President Donald Trump’s plan to cut foreign aid as part of a proposal to boost defense spending by $54 billion is receiving serious blowback from a somewhat surprising group: former military leaders, who say major reductions to the State Department, especially development aid, would pose a serious risk to national security.

More than 120 former three and four-star generals signed a letter late Monday opposing cuts to the State Department and development agencies that are “critical to preventing conflict and reducing the need to put our men and women in uniform in harm’s way.” Among those signing were former CIA director and retired Army Gen. David Petraeus and retired Adm. James Stavridis, the former NATO supreme allied commander.

Trump aides announced Monday that he would propose cutting $54 billion largely from other programs to fund the boost in defense spending, and that much of that reduction would come from axing the budgets for the State Department and the U.S. Agency for International Development by 37 percent.

The State Department budget makes up about 1 percent of federal spending.

“Even though it’s tiny – only 1 percent – the leverage that foreign aid exerts on behalf of U.S. security interests is incredible,” retired Army Lt. Gen. Dan Christman, who signed the letter, told McClatchy. He said the biggest misconception about foreign assistance was that it was simply money the U.S. donated to other countries.

“If the argument is ‘America first,’ this account is doing that . . . This leverage in many respects is putting American interests first and at the same time helping address serious issues in these countries that can downstream necessitate U.S. troops,” he said.

Christman, a former superintendent of the U.S. Military Academy, said he saw the value of foreign aid firsthand after the wars in Korea and the Balkans, where the assistance resulted in “incredible pro-U.S. partners.” Any adjustment to funding for these programs needs to be done “with a scalpel, not a hacksaw,” he said.

“If you don’t fund these programs that support diplomats and development at a reasonable level, what you’ll see down the line is increasing default to using boots and not suits,” he said

Two of Trump’s top Cabinet members, Defense Secretary Jim Mattis and Homeland Security Secretary John Kelly, have voiced support for these programs in the past, calling them invaluable to military interests.

Mattis put it bluntly in a 2013 hearing before the Senate Armed Services Committee.

“If you don’t fund the State Department fully, then I need to buy more ammunition,” he said.

Foreign assistance programs are especially valued by military leaders in charge of regions with small numbers of U.S. forces. Kelly was enthusiastic about the programs when he was heading the U.S. Southern Command, which oversees all military operations in Latin America and the Caribbean. He strongly endorsed a $750 million aid package to Central America in 2015, arguing that it was in the long-term interests of the United States.

“The cost of investing now to address Central America’s challenges is modest compared with the costs of letting festering violence, poverty and insecurity become full-blown crises,” he told Congress at the time.

Kelly also advocated for continued assistance to Colombia, calling the turnaround of its security situation in recent years “nothing short of phenomenal.”

If you can spend $10 million to appease unrest in some country . . . why would you spend $1 billion for the military to go there? Mark Cancian, CSIS defense budget analyst

Although it will be up to Secretary of State Rex Tillerson to lobby for his agency’s funding, Trump’s two top generals are likely to back him up.

“When Tillerson is with the Cabinet and says, ‘I need the money,’ Kelly and Mattis will put their hands up and say, ‘I agree,’ ” said Mark Cancian, a defense budget analyst with the Center for Strategic and International Studies and a former senior official at the Office of Management and Budget.

“I think the reason you see so much support from the Department of Defense is that they’ve experienced the value of the State Department in conflicts we’ve had in the last years in the Middle East,” he said.

State Department employees were vital in forming provincial reconstruction teams in Iraq, where they worked with local governments on economic and rule-of-law issues, which the military found immensely valuable, Cancian said.

The debate over U.S. spending on foreign aid isn’t new. Defense and State department officials have long argued against cuts by saying that engaging with countries through various aid programs prevents unnecessary military involvement, which is exponentially more expensive.

“Even if you can reduce military engagement by a small amount, it is far more cost effective,” Cancian said. “If you can spend $10 million to appease unrest in some country . . . why would you spend $1 billion for the military to go there?”

U.S. foreign assistance amounted to roughly 1.3 percent of the federal budget in fiscal year 2015, an estimated $48.57 billion. About 43 percent of that went to bilateral economic development programs, 35 percent for military aid and non-military security assistance, 16 percent for humanitarian activities and 6 percent to support the work of multilateral institutions, according to the Congressional Research Service. The top recipients were Afghanistan ($5.4 billion), Israel ($3.1 billion), Iraq ($1.8 billion) and Egypt ($1.4 billion).

Foreign Aid is not charity. We must make sure it is well spent, but it is less than 1% of budget &amp; critical to our national security.

Trump is expected to release his final budget proposal in March. Some members of his own party have said they strongly disagree with the proposed cuts to the State Department and foreign aid.

“A budget this lean would put those who serve overseas for the State Department at risk,” Sen. Lindsey Graham, R-S.C., said Tuesday. “And it’s not going to happen.”

Some lawmakers echoed the concerns raised by the retired generals.

“Foreign aid is not charity. We must make sure it is well spent, but it is less than 1% of budget & critical to our national security,” Sen. Marco Rubio, R-Fla., tweeted Tuesday.

Franco Ordoñez contributed to this report.